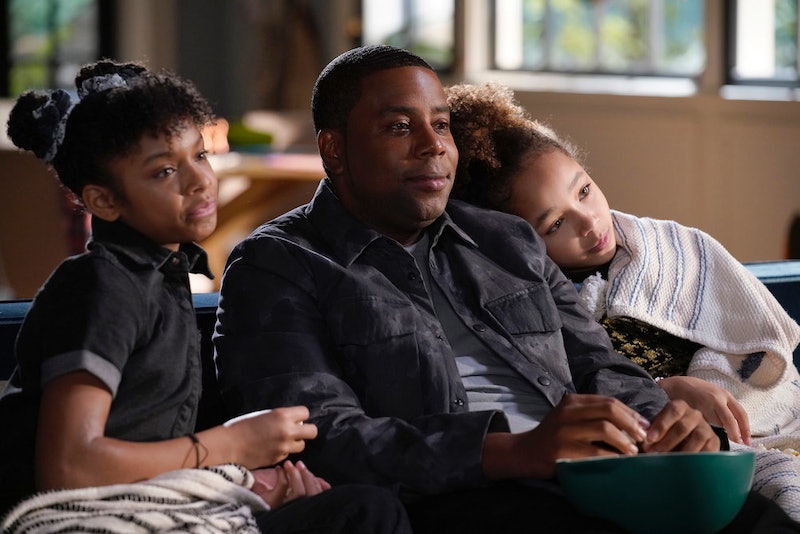 Kenan Thompson's new NBC sitcom may be called Kenan, but it's not based on his real life. He stars as the fictional character Kenan Williams, an Atlanta morning show host who's raising his two daughters by himself following the death of his wife. It's true that Thompson shares some things in common with the character (they both have two daughters, grew up in Atlanta, and work in television), but there's at least one big difference: Thompson's wife is still very much alive.

According to Good Housekeeping, Thompson is married to interior designer Christina Evangeline. The two wed nearly 10 years ago and now share two children — 6-year-old Georgia and 2-year-old Gianna — so he can at least relate to his characters' struggles with fatherhood. However, the main premise of Kenan actually came from writer Jackie Clarke, who lost her mom as a child.

In order to portray the storyline accurately, Thompson told Variety that he did research about how widowers handle the loss of a spouse. Specifically, he looked to fellow comedian Patton Oswalt, whose wife Michelle McNamara died in 2016. "I was watching what Patton went through," Thompson said. "I couldn't fathom even bringing up a subject like that [to him]. But it was seeing what he said about it naturally, reading his Instagram and different articles, and watching his stand-up, where he talks about it [that helped in my preparation for the show.]"

More like this
ITV's 'Maternal' Was Inspired By A Very Simple – & Unanswerable – Question
By Maxine Harrison
'The Queen’s Gambit' Season 2 Tweet Wasn’t From Anya Taylor-Joy
By Mary Kate McGrath, Jack Irvin and Grace Wehniainen
Linda Ronstadt’s “Long Long Time” Plays A Pivotal Role In The Last Of Us
By Brad Witter
Taylor Swift Visited The 'Glee' Set For This Bizarre Season 5 Episode
By Grace Wehniainen
Get Even More From Bustle — Sign Up For The Newsletter
From hair trends to relationship advice, our daily newsletter has everything you need to sound like a person who’s on TikTok, even if you aren’t.