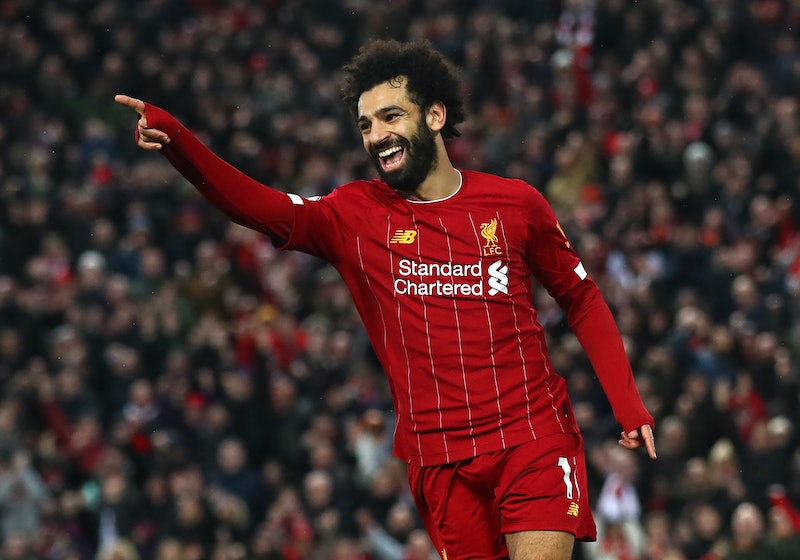 To his fans, Liverpool FC footballer Mohammed “Mo” Salah is considered the “Egyptian Messi” for his impressive skills that helped secure a momentous Premier League win for the team in 2020. Off the pitch, he is celebrated as a generous role model. And in a rare interview with GQ, the striker shared insights into the highs and lows of his career, as well as his life outside of football. But is Mo Salah married?

The footballer is a devoted family man and has been married to his childhood sweetheart, Magi Sadeq, since 2013. Originally from Nagrig, Egypt, the 29-year-old met his wife at school when they lived in the Egyptian village of Basion Gharbia. Despite her husband’s fame, Sadeq, 27, tends to keep a low-profile, and doesn’t appear to be on social media, yet is often seen supporting her footballer husband during his matches.

The married couple has two daughters, Makka and Kayan, who regularly appear on Salah’s Instagram page and, from the looks of his fun family photos at the beach, playing chess, and dressing up as Disney Characters, the striker is such a fun dad. Speaking about his eldest daughter Makka, 7, to GQ, he said jokingly, “She is really competitive. She tells me, ‘By the way, I am more famous than you because when we go out people want to take a picture with me.’”

Both Salah and Sadeq are devout Muslims, and per Harpers Bazaar, return to his hometown in Egypt every Ramadan to give back to the villagers.

Yet, Salah’s football fame means it can be difficult to do everyday things without inspiring crowds. As he told GQ, “I went out with my family just to walk and go to pray, and suddenly there were 300-400 people outside.”

He explained to the magazine that it was one of the few occasions he’s been publicly angry. The throng was so intense that they couldn’t leave the house. “I was so mad. My mum was crying, my sister was crying, my wife was crying, because they wanted me to go on that day,” he says. “My father was disappointed. I needed to be with them.”

The talented footballer is currently away from Anfield, on international duty at the Africa Cup of Nations.

More like this
David Beckham’s Controversial Qatar Deal Skyrocketed His Net Worth
By Catharina Cheung
'Love Island' Has Added Yet Another Bombshell To The Villa
By Bustle UK
4 Surprising Celeb Throuples That Got The Internet Talking
By Sophie McEvoy
Jennifer Coolidge Slid Into Ariana Grande’s DMs In The Most Iconic Way
By El Hunt
Get The Very Best Of Bustle/UK
Sign up for Bustle UK's twice-weekly newsletter, featuring the latest must-watch TV, moving personal stories, and expert advice on the hottest viral buys.