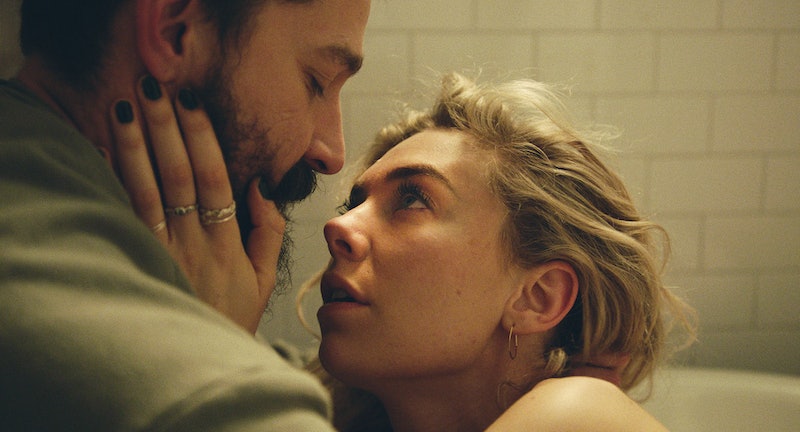 In Pieces of a Woman, now available on Netflix, Vanessa Kirby and Shia LaBeouf play Martha and Sean, a couple on the verge of parenthood. But when their home birth ends in tragedy, a year-long court battle with the midwife (Molly Parker) fractures Martha's already fragile relationship with Sean and her domineering mother (Ellen Burstyn).

Pieces of a Woman was written by Kata Wéber and directed by Kornél Mundruczó. The Hungarian filmmaking duo previously made 2014's White God and 2017's Jupiter's Moon together. This time, however, Wéber and Mundruczó got extremely personal for their English language debut, reshaping the story of their own pregnancy loss into a film that captures the inner turmoil of personal grief.

"My wife and I wanted to share one of our most personal experiences with audiences with the faith that art can be the best medicine for pain," Mundruczó writes in his director's statement. "Are we ever the same after a tragedy? Could we have a partner in the freefall of grief, or are we alone? With Pieces of a Woman, we wanted to create an authentic story about tragedy and learning to live alongside that grief. Loss forces us to step beyond the boundaries of understanding or control, but with it comes the ability to be reborn."

As Wéber and Mundruczó have detailed, their experience wasn't exactly the same as in the film — they call it “highly fictionalized"— but after a miscarriage, Wéber retreated emotionally and physically in order to work through her trauma. She tells AnOther Magazine that she went to Berlin and wrote. "I felt that my body had been taken away from me because there were all of these people around [expressing their opinions on the miscarriage]. My body wasn't mine. I had to regain it back through writing, which was like therapy for me."

The piece remained in fragments of writing until the pair turned it into a play, after which they transformed it into their idea for the film. "I wanted to talk about a taboo, which I think really exists. Women who lose their babies are so relegated to isolation. People (around them) just don’t know how to deal with these losses and tragedies, both within society and family. That was the origin," Wéber tells Variety.

The film was also inspired by a real-life case of a Hungarian midwife who was charged with manslaughter after a baby died during a home birth, given a two-year prison sentence but later pardoned. Mundruczó tells The Hollywood Reporter that the case was, "incredibly important for the whole society, and it was huge, even bigger than we made it in the movie. It was a very political case about the question of who owns your child's body: the state or you as the woman? And can you decide where you want to give birth or not?"

Knowing Pieces of a Woman was inspired by the writer and director's own experiences as well as a real life case make the film all the more powerful.

More like this
What’s New On Netflix: Ana De Armas’ 'Blonde' & A Nick Kroll Special
By Arya Roshanian
Here’s Everything Coming To & Leaving Netflix In October
By Jake Viswanath
What’s New On Netflix: Meet 'The Real Bling Ring'
By Arya Roshanian
How To Stream 'The Woman King'
By Morgan Leigh Davies
Get Even More From Bustle — Sign Up For The Newsletter