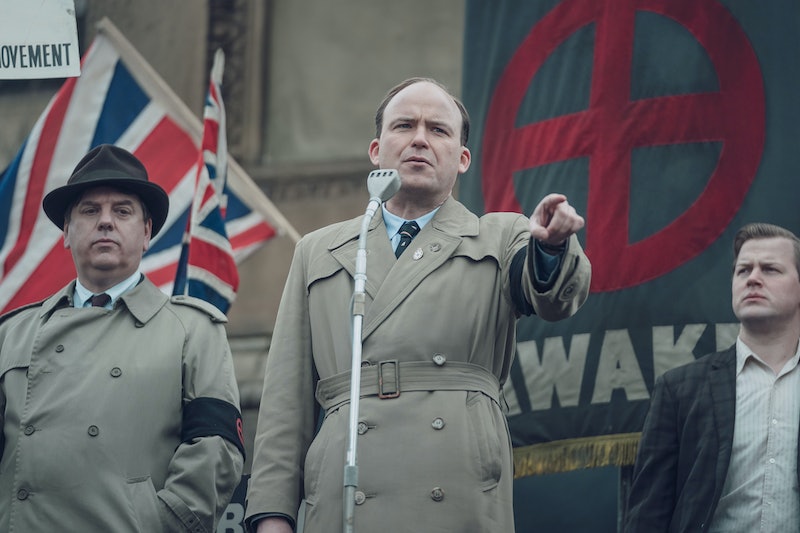 While Vivien and the majority of the characters of this new drama are fictional, Jordan was actually a real person. Played by Rory Kinnear in the series, Jordan leads the neo-Nazi National Socialist Movement (NSM), which was a far-right fascist organisation in sixties Britain. Through this group (and others), Jordan incited racism and rioting through his speeches and public appearances.

Born John Colin Campbell Jordan on July 19, 1923, the future neo-Nazi leader first found far-right politics while studying history at Sidney Sussex College in Cambridge. It was here that he started following the teachings of Arnold Leese, who was the leader of the pre-war Imperial Facist League, per the Guardian. This led to Jordan forming a “nationalist club” while at Cambridge, which became the Birmingham Nationalist Book Club once he graduated.

In 1956, Jordan was handed his first conviction in relation to his far-right activism for “insulting words and behaviour during a protest” led by the League of Empire Loyalists. Soon after, Jordan formed the White Defence League, which he ran out of a property in Notting Hill left to him by Leese following his death in 1956.

Jordan went on to merge this group with the National Labour Party, which soon became the British National Party. He soon left the BNP following a disagreement within the party in 1962, leading to the formation of the NSM. That same year, Jordan was convicted at the Old Bailey under the 1936 Public Order Act for attempting to form a paramilitary force called Spearhead, modelled after a paramilitary organisation associated with the Nazi Party called the Sturmabteilung (SA).

During his time in prison, Jordan married the niece of fashion designer Christian Dior, Françoise. According to the Independent, Françoise was “as fervently Nazi as Jordan” – so much so that part of their marriage ceremony included the couple cutting their fingers and mixing their blood over a copy of Adolf Hitler’s 1938 manifesto Mein Kampf. The couple divorced in the mid-1960s, however.

Jordan and the NSM were regular faces within the British court system in the ’60s and ’70s following demonstrations, protests, riots, and arson attacks against the Jewish community, synagogues, and other buildings across London. It was these acts of terror that led to the formation of the 62 Group, an anti-fascist organisation that fought against the NSM.

The neo-Nazi leader eventually “fell from grace […] if you can ever say that he was in a place of grace to start with” as Kinnear explained during an interview about Ridley Road, but continued his “diatribe of hate” until he died in 2009.

More like this
'Bridgerton' Fans Will Love ITV’s 'The Confessions of Frannie Langton'
By Maxine Harrison
Our First Look At 'Vardy V Rooney: A Courtroom Drama' Doesn’t Disappoint
By Bustle UK
Ciarán Griffiths Is Making His 'Corrie' Comeback
By Catharina Cheung
'Doctor Who's New Companion Has Been Winning Acting Awards Since She Was 18
By Shahed Ezaydi
Get The Very Best Of Bustle/UK