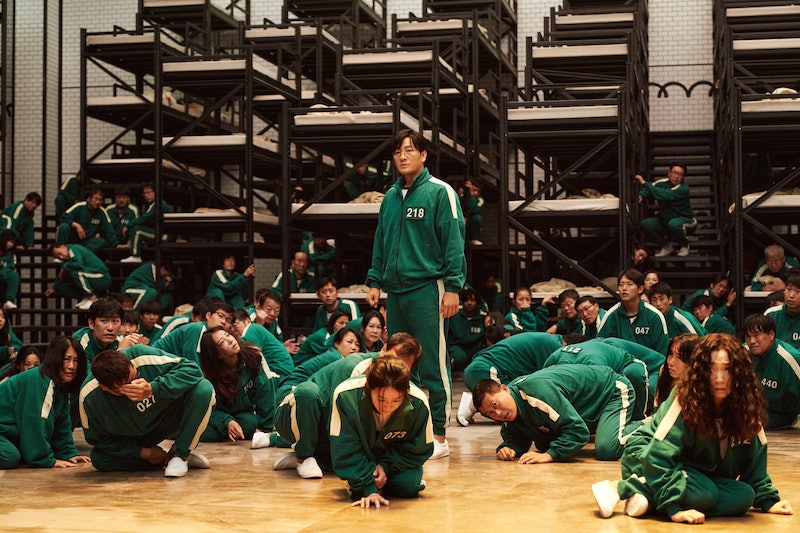 Netflix’s hit survival drama Squid Game puts a twisted spin on childhood games like Red Light, Green Light, hopscotch, tug of war, and marbles. When 456 cash-strapped contestants are invited to play in a mysterious tournament for the chance at 45.6 billion won (or about $40 million U.S.), they soon discover that the games come with dangerous stakes: win the game or die.

The competition itself is obviously not real, but the games that comprise each round are, including the one the Korean series takes its title from. Squid Game, which Netflix describes as a type of tag where offense and defense use a squid-shaped board drawn in the dirt, was wildly popular in Korea in the 1970s and ‘80s, around the time writer-director Hwang Dong-hyuk was growing up in Seoul. “It was one of the most physical and it was also one of my favorite games,” Dong-hyuk recently told the RadioTimes. “I felt that this game could be the most symbolic children’s game that could represent the kind of society we live in today.”

Squid Game is played on a field that has an outline with two circles, one at the top and one at the bottom. A triangle intersects the circle at one end, and a square intersects the other. Protagonist Seong Gi-Hun explains the rules the start of the show. “Children are divided into two groups: the offense and the defense. Once the game starts, the defense can run around on two feet within bounds, while the offense outside the line is only allowed to hop on one foot. But if an attacker cuts through the waist of the squid outpacing the defense, he or she is given the freedom to walk freely on two feet,” he says. “After preparing for the final battle, the attackers gather at the entrance of the squid. In order to win, the attackers must tap the small closed-off space on the squid's head with their foot. If the defender pushes you out of the squid's line, you die.” (Of course, that death was only metaphorical when he was playing as a kid).

Dong-hyuk, who initially envisioned Squid Game as a feature film, also drew inspiration from survival-themed Japanese manga and anime while dreaming up the competition. “I freely admit that I’ve had great inspiration from Japanese comics and animation over the years,” he told Variety in September. “When I started, I was in financial straits myself and spent much time in cafes reading comics including Battle Royale and Liar Game. I came to wonder how I’d feel if I took part in the games myself. But I found the games too complex, and for my own work focused instead on using kids’ games.”

Ultimately, Dong-hyuk “wanted to write a story that was an allegory or fable about modern capitalist society, something that depicts an extreme competition, somewhat like the extreme competition of life,” he added to the outlet. Dong-hyuk also attributed Squid Game’s massive success — it’s currently on track to be Netflix’s biggest show to date — in part to the games depicted being “extremely simple and easy to understand,” thus allowing viewers to “focus on the characters, rather than being distracted by trying to interpret the rules.”