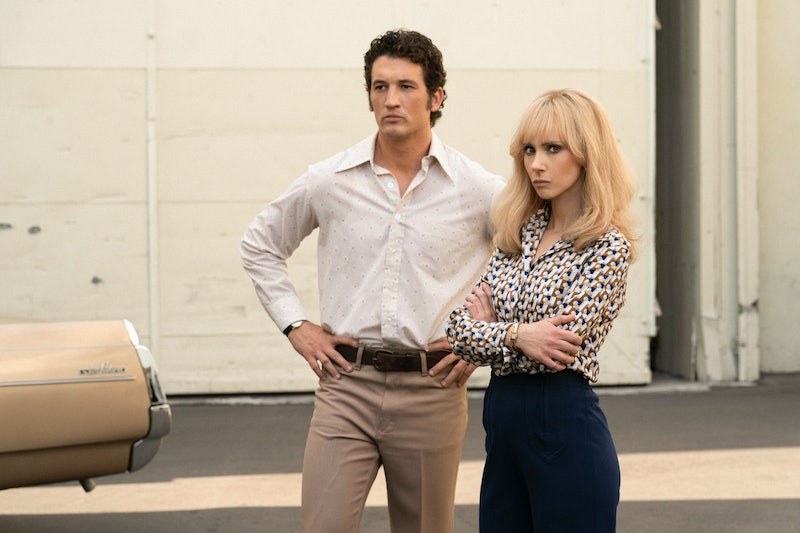 Based on Oscar-winning producer Albert S. Ruddy’s memories of making The Godfather, Paramount+’s The Offer tells the story of the mob threatening the classic 1972 film adaptation’s production. One scene in the 10-episode limited series, for example, shows former Paramount boss Robert Evans (Matthew Goode) finding a dead rat in his New York hotel room bed — a clear warning from Mafia members, apparently angered by a potentially negative big screen depiction of Italian Americans. In fact, The Godfather author Mario Puzo reportedly never used the word “Mafia” in his novels in order to head-off complaints from the Colombo crime family.

The Offer allows Ruddy, who’s played by Miles Teller and serves as an executive producer, to tell his side of the story. To put his recollections on paper, series creator and writer Michael Tolkin spent five days interviewing Ruddy. “What sealed it for me was when Al said, ‘Every day of making The Godfather was the worst day in my life,’ and that told me we had a show,” Tolkin explained to Vanity Fair in January. “For every character in the film, getting it made or stopping it from being made was at the core of their actions, and it was a matter of life and death to them. So that’s not a gangster story, that’s a human story. That’s what gave the book and the movie so much power. Everyone is fighting for their existence.”

The Offer Draws From Ruddy’s Memories

“That’s the point of view of, I guess, the producer,” Coppola, who was not involved with The Offer, told Variety in March. “But it doesn’t really reflect what really happened, in my opinion.”

Meanwhile, Deadline editor-at-large Peter Bart, a former Paramount production vice president under Evans in the 1970s, offered more specific criticisms of The Offer’s accuracy. “They are vivid anecdotes, but they are at odds with the accounts of principals who made the movie — of which I am one — and who encountered a different reality,” Bart, who’s played by Josh Zuckerman in the series, recently wrote. He added that his recollections of filming The Godfather were “fully consistent” with those of Coppola, Evans, key production supervisor Gray Frederickson, and “casting guru” Fred Roos, among others — though Paramount+ reportedly had “zero consultation” with these individuals.

The Mafia Threat In The Offer May Be Inflated

In his Deadline article, Bart quoted former The New York Times and New York magazine journalist Nick Pileggi, who was the only reporter invited to the Godfather set. “The principals of the movie were celebrated, not threatened,” recalled Pileggi, who later wrote the book Wiseguys and co-wrote the screenplay for Goodfellas. He even remembers important “wiseguys” eagerly monitoring the scene in which Brando’s Don Vito Corleone is gunned down. “They were applauding,” Pileggi claimed. “They loved the movie.”

That’s not to say that Colombo didn’t wield his Mafia family’s connections to “make demands for a more sympathetic screenplay and would go directly to a representative of the production,” though. “In Ruddy’s mind, the situation was becoming a looming threat. The Mafia was on alert,” Bart added. “He warned his assistant that it would be wise to shift offices and rotate cars. There would be threats and pursuits. Bullet holes allegedly were found on an assistant’s car.”

Paramount also reportedly received bomb threats, while other execs fielded threatening phone calls to shut down production. However, he notes that Frederickson, who worked alongside Ruddy, recently told him, “None of this was happening to my best recollection.” Despite a depiction of Evans also receiving a threatening phone call in his New York hotel, Bart corroborated that such an event never occurred either.

“Was Al Ruddy on an island of his own making?” Bart wrote. “While The Godfather’s dramatic saga over the years has moved millions of filmgoers, the TV narrative about its supposed production crises may ultimately be listed under the genre of science fiction.”

Memory can be subjective, after all.