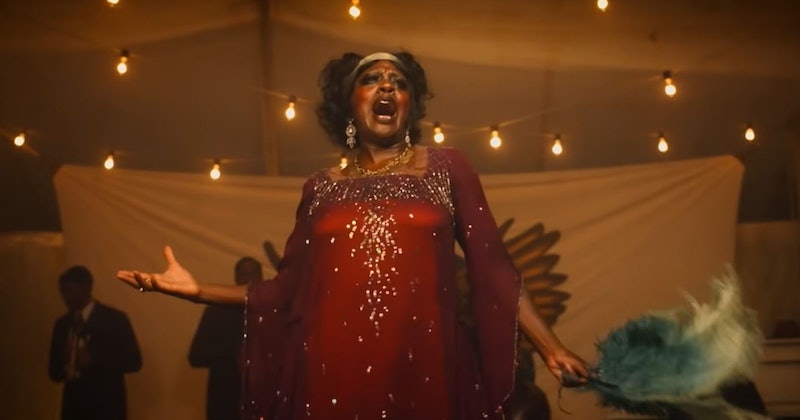 Ma Rainey's Black Bottom, which is based on a play by August Wilson, premieres on Netflix on December 18. In it, Viola Davis plays Ma Rainey, a legendary blues singer dubbed the "Mother of the Blues," back in 1920s Chicago. Naturally, as Davis is playing someone nicknamed the "Mother of the Blues," it bears asking: Did Viola Davis actually sing for any of the songs in Ma Rainey's Black Bottom?

As Netflix's trailer for the film teases, there are a few musical numbers featuring Davis in character belting out some strong, emotional songs both on stage and in the recording studio. But the story isn't just on focused on Ma Rainey — along for the ride is Levee (Chadwick Boseman, in his final film performance), a coronet player in Ma Rainey's band and, as the story goes on, somewhat of a rival to the legendary singer. The tension for the film flows from the competition between the two performers — Ma Rainey as the established legend, Levee as the upstart young artist — as well as the strained relationship between Ma Rainey and her manager and producers.

But still, the film seems to make time for showy musical pieces and as it turns out, Davis did indeed sing for one — only one — of these musical numbers. According to the LA Times' chat with Davis for the film, "Aside from one song sung by Davis, vocals are courtesy of singer Maxayn Lewis," whose voice is featured in backing vocals for numerous singers such as Britney Spears, Ricky Martin, Bonnie Raitt, B.B. King, and Donna Summer, per the outlet. Lewis also led her own self-titled R&B group in the early 1970s.

Another performer worth noting is Boseman's portrayal of Levee, the upstart musician looking to innovate and find new ways of playing the blues, hoping to branch out of Rainey's "jug band" blues. According to a chat between co-star Michael Potts and Cinema Blend, Boseman actually played the trumpet, and he did it well. "Even when he was playing that trumpet and, if the three of us were riffing on something he’d just pop in. He didn’t miss a beat, he knew exactly what we were talking about," Potts told the outlet. Fellow co-star Colman Domingo also said, "[I remember] how much he loved to rehearse. How much he loved to play that trumpet. How much he loved to just inquire August Wilson’s rich text, and he was playful."

More like this
What’s New On Netflix: 'Bridget Jones’s Diary' & 'Monster-in-Law'
By Arya Roshanian
Here’s Everything Coming To & Leaving Netflix In August
By Jake Viswanath
Everything To Know About Netflix's Marilyn Monroe Movie 'Blonde' Starring Ana De Armas
By Grace Wehniainen
Let’s Talk About Dakota Johnson’s Hair In 'Persuasion'
By Morgan Leigh Davies
Get Even More From Bustle — Sign Up For The Newsletter