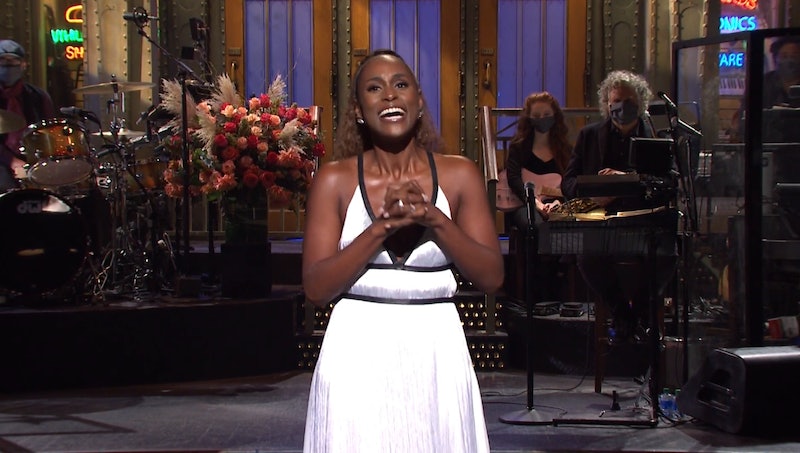 It's been four years since Insecure premiered amid the 2016 presidential election cycle, and Issa Rae's Saturday Night Live monologue illustrated that she's come much further than the country has in the meantime. "The [election] results came in, and, of course, everybody was freaking out. I was freaking out" the first-time host recalled onstage of the 2016 election. "And it felt really awkward for my life to be going so good. Like, it was rude to be peaking right when democracy was collapsing. It's just really weird to say thank god for what happened in the fall of 2016."

Despite Insecure's success, Rae admitted to feeling just as "awkward and Black" in Hollywood as she did during her freshman year of high school. "I'd see all the cliques and the cool girls that I wanted to be friends with, and I even dealt with bullies sometimes," she joked. "You guys know it as Twitter."

The four-time Emmy nominee went on to describe how scary Twitter can be, quipping that "being dragged on social media feels like a low-stakes horror movie." Not to worry though: all it took was a dead phone battery to escape the trolls.

If Insecure's first season served as Rae's entry to high school, it would track that, four years later, she's now approaching graduation — and got a crash course in Hollywood along the way. Among the valuable lessons she's learned is the art of saying "oh my god, hey!" when running into industry types. And when all else fails, she just pretends to be someone else entirely. "Excuse me, I'm Mary J. Blige, racist," she joked.

In fact, Mary J. seems to be Rae's go-to scapegoat. "If this show goes bad though, just blame it on me: Mary J. Blige," Rae said after admitting earlier in her monologue that she was so scared, she might throw up. After all, she'd just walked down the same stairs as "some of [her] favorite comedy legends like Tina Fey, Amy Poehler, and Molly Shannon."

But hosting SNL was ultimately another celebratory milestone. As Rae concluded, "If doing my show for the last four years is like high school, SNL is like my prom."