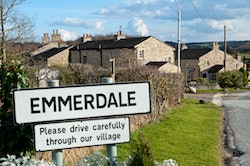 It should go without saying that representation matters in TV and film. Following the increased momentum behind Black Lives Matter movement this summer, ITV is to cast new Black characters in Emmerdale. It comes as part of the broadcaster's drive to ensure greater diversity on its shows.

Emmerdale will be welcoming a new Black family to the famous Yorkshire village in the next few months, according to Digital Spy. Soap bosses revealed that are actively looking for actors to join the cast as part of ITV's overall Diversity Action Plan.

"On Emmerdale we are currently casting a brand new Black family who will come in right at the heart of the village," John Whiston, Managing Director of Continuing Drama & Head of ITV in the North, told Digital Spy.

He added: "The Black Lives Matter movement rightly gave us an impetus to a great many initiatives on-screen and off-screen. Off-screen, we're working on our Diversity Acceleration Plan, which is part of ITV's overall Diversity Action Plan."

ITV's Coronation Street has also worked on diversifying its characters in recent times.While there has been a number of Black, Asian, and minority characters over the years, the beloved Manchester soap introduced its first regular Black family, The Baileys, just last year.

Whiston admits that there's "obviously more to be done" on both sides of the camera. "For us, a key part of that is increasing the number of BAME writers and directors we employ as they are the key creative powerhouse behind the shows. This is something we are making real progress on, though obviously there is more to be done," he told Digital Spy.

More like this
Twitter Simply Couldn’t Cope With The ‘Happy Valley’ Finale
By Sophie McEvoy
Alan Carr's 'Changing Ends' Is A Witty Sitcom Based On His Own Life
By Darshita Goyal
Twitter Is Burning As Phoebe Dynevor Reveals Daphne’s 'Bridgerton' Exit
By Sophie McEvoy
'Boiling Point's TV Sequel Is Set To Deliver A “Rollercoaster Of Emotions”
By Catharina Cheung and Sophie McEvoy
Get The Very Best Of Bustle/UK
Sign up for Bustle UK's twice-weekly newsletter, featuring the latest must-watch TV, moving personal stories, and expert advice on the hottest viral buys.