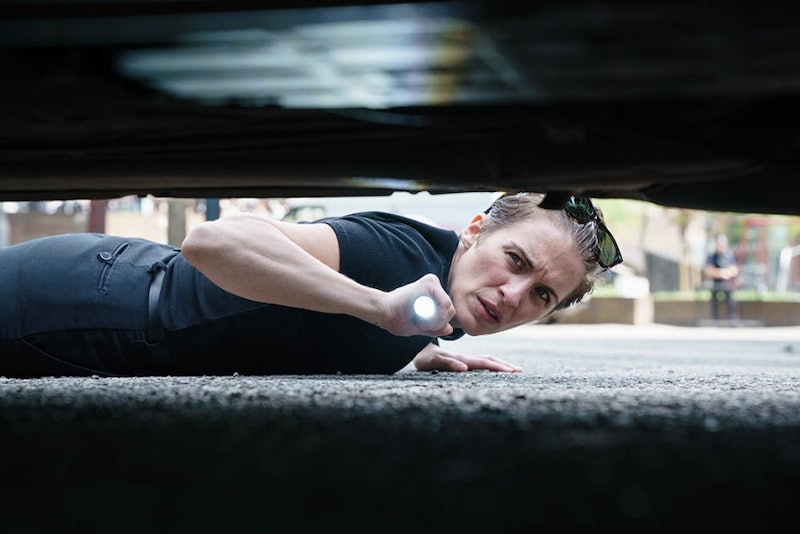 No stranger to police dramas, Line Of Duty’s Vicky McClure is to reunite with Jed Mercurio in ITV’s new thriller Trigger Point. Set in contemporary London, the six-part series centres on a bomb disposal squad known as ‘EXPO’ where, ITV notes, “officers risk their lives daily”. McClure stars as “troubled” bomb disposal operative Lana Washington, and knowing Mercurio’s previous form, viewers can expect more than a few tense moments. Ahead of its release, here’s everything you need to know about ITV’s new drama Trigger Point.

Trigger Point is the debut series by upcoming screenwriter Daniel Brierley, mentored by Mercurio himself. Brierley says he’s excited to share the “unknown story of the brave EXPO officers who risk their lives every day to keep us safe.”

As well as a great line-up of actors, the series is also being produced by Mercurio’s company, HTM Television — so all signs point to it being the next big TV crime success. Here’s what we know so far:

What is Trigger Point about?

As ITV ominously shares: “Death is always just a heartbeat away” for the bomb disposal squad. The cases they tackle are mainly linked to terrorism, and the main character Lana Washington (McClure) suspects a bomber is specifically targeting her unit. Puns aside, it looks set to be an explosive watch.

When will Trigger Point air on ITV?

As with Line of Duty, Mercurio is starting to build the hype – and suspense – early on this one. Viewers should expect to wait a while as filming has not yet begun. However, production is expected to begin in London later this year, confirms ITV. It’s likely to be a highlight for 2022.

What do we know about Vicky McClure’s character?

Per ITV’s synopsis, Vicky McClure will play “reckless and out of control” front-line officer Lana Washington, who is an experienced bomb disposal operative.

“Lana is ex-military and pushed to breaking point dealing with a series of improvised explosive devices which threaten the capital during a terrorist summer campaign,” the synopsis explains.

It continues: “Under extreme pressure and searching for answers, Lana can’t help but become suspicious that the bomber is premeditatedly targeting her unit. It’s a terrifying thought, but against all odds how does she prove it and discover the bomber’s real identity?”

What has McClure said about starring in Trigger Point?

Fresh from that pretty controversial Line of Duty ending, it’s safe to say McClure is thrilled to star in the new series.

Tweeting about her new role, McClure said that it’s “Not lost on me how lucky I am to land great roles with great people!!”

Back in April, McClure also teased the new drama by sharing a photo of the Trigger Point script.

“This has been waiting in the wings a while, great to read through with a brilliant cast today,” she wrote in the Instagram caption. “Daniel’s written an amazing script & great to be back in business with Jed Mercurio & @htmtelevision @itv #triggerpoint,” she added.

In a statement via ITV, McClure was also effusive about her upcoming role: “So grateful to be working with Jed again. I’m really looking forward to creating a strong, bright, and troubled character in Lana Washington. Daniel Brierley has produced a brilliant and nail-biting script. I can’t wait to get started later this year.”

Who else will be starring in Trigger Point?

Lester will play Joel Nutkins, who works alongside Lana Washington. The characters are both ex-military, and pretty close, having served together in Afghanistan.

“I’m really looking forward to partnering with Vicky on this great new series,” Lester said of the project, via Stylist.“Jed Mercurio’s material is always great. This series is ambitious and challenging which is why it’s exciting to be a part of the team,” he added.

The thirst for a new crime drama seems to be at an all-time high, and Vicky McClure fans have been busy tweeting about the new series.

“How exciting... something to look forward to after the adrenaline high of LOD. But pleeaaase persuade Jed to write another series,” one fan tweeted to McClure.

“Just what we need after Line of Duty! So excited for this, you deserve it!” said another.