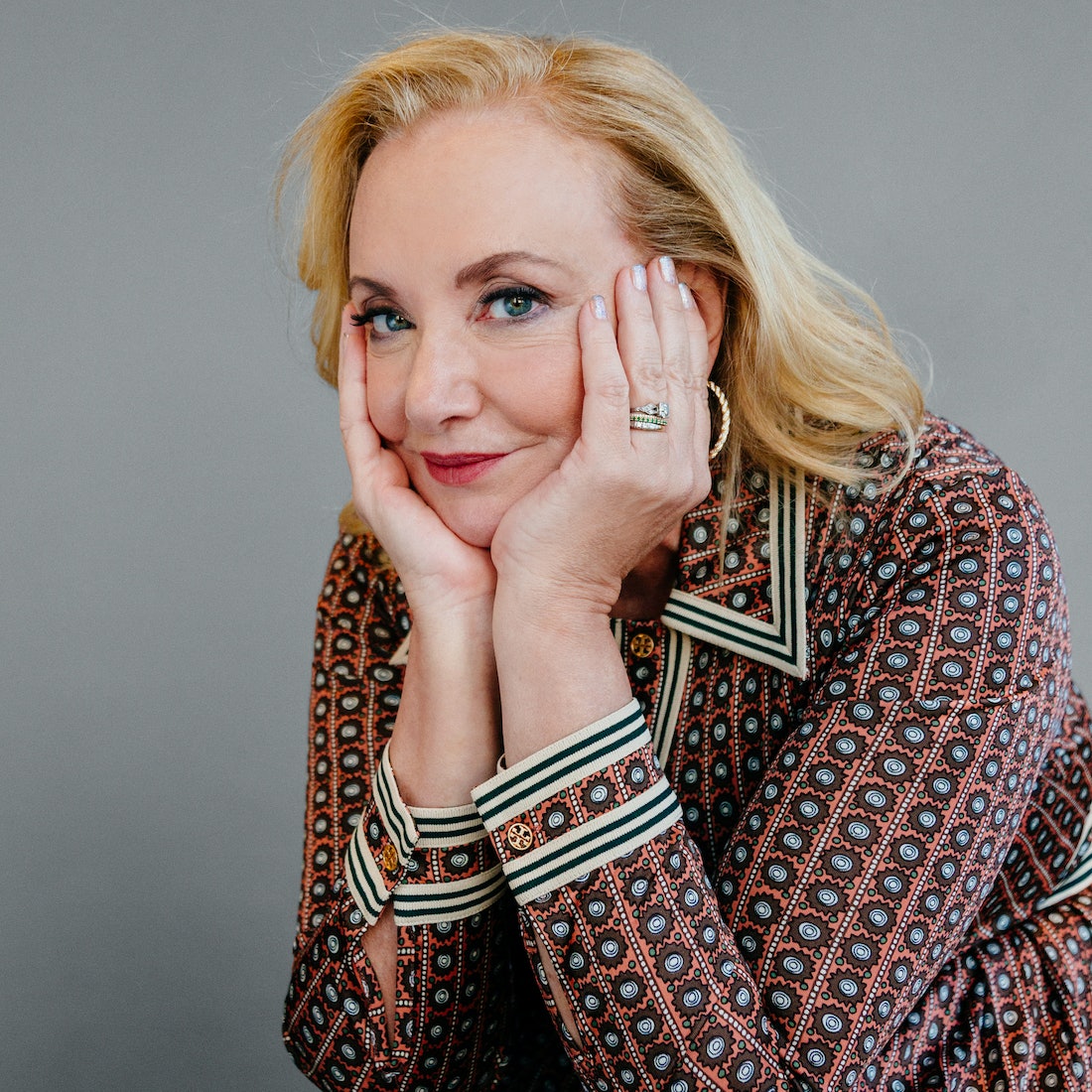 The night before I am due to meet J. Smith-Cameron, she tweets that she could “really use a piece of chocolate cake.” Her followers, who have grown exponentially thanks to her performance as Gerri in HBO’s Succession, quickly heed the call. “Will someone please get this woman some chocolate cake? My god,” writes one. “Nigella Lawson’s chocolate fudge cake is the way to go,” advises another. When we meet the following afternoon at the popular West Village Italian eatery Morandi, I feel the weight of the “Gerri Hive” on my shoulders. I must get this woman a piece of cake. I offer as soon as we sit down, but Smith-Cameron insists she’s already curbed her craving. Instead, she’s feeling salty, so we order fried olives, blistered shishito peppers, and crispy artichokes with our glasses of rosé and settle down to discuss the matter at hand: how a 64-year-old Broadway veteran became a lusted-after internet crush.

“It’s wild. It’s very fluky that I got Gerri, that Gerri exists, that Gerri became so meaty [of a role], and that fans like Gerri,” she says from the quiet of our corner booth. “I don’t take any of this for granted at all. Every day, I think to myself, This is just delightful.” Dressed in a flowing, bohemian dress and carrying an owl-printed tote bag, the only trace of the Waystar Royco’s ever-corporate chief counsel is Smith-Cameron’s soft, conspiratorial voice. “People of all types want to get together with Gerri. [They tweet] ‘Gerri can get it,’” she says, laughing, before steering the conversation delicately back to the biography of Lyndon B. Johnson that she’s currently reading.

As followers of Smith-Cameron on Twitter know, she’d rather talk actual politics than sex appeal. Succession’s extremely online fans love her for both. Such is the thirst for the HBO show that a trippy video of Kermit the Frog dancing to Nicholas Britell’s Emmy-winning title tune became a viral hit, while @No Context Succession’s screenshots with their profane subtitles are a favorite of the media crowd. Smith-Cameron has run her own Twitter account since 2013, when she joined to promote her work in Sundance Channel’s Rectify. “[Following] Paul Rudnick and Duchess Goldblatt are my very favorite things about being on Twitter,” she says, though the memes are an added bonus. “I love interacting with fans and seeing how creative [they] are with the reels, memes, and GIFs.”

Despite her newfound online fame, the Kentucky native flies under the radar in real life. She arrives 10 minutes early to our dinner, navigating the West Village with the authority of a local. (She was a longtime resident until a recent move to SoHo; she and her husband, Kenneth Lonergan, are empty nesters now that their daughter, Nellie, has left to study acting at the University of St Andrews in Scotland.) When a kerfuffle with our reservation forces us to linger on the restaurant’s busy street corner longer than anticipated, Smith-Cameron goes unrecognized.

Before playing Gerri, she worked mostly in New York theater, earning her first Broadway credit for Crimes of the Heart in 1982 alongside Holly Hunter, who would later appear in Succession as the equally formidable Rhea Jarrell. By the ’90s, Smith-Cameron began working on screen, appearing in cult classics like Harriet the Spy, Mighty Aphrodite, and The First Wives Club, but she never put much stock in becoming a movie star. “All the film and TV things I got sort of by accident,” she explains. “Scott Rudin would produce these big cast comedies, and he really loved New York actors. So he would offer to bring us in for that. [Actors like] Nathan Lane, Dana Ivey, Victor Garber, [and myself].”

Her role on Succession emerged in a similarly serendipitous fashion. “I wasn’t auditioning much because my mother was very ill, actually on her deathbed,” she says. When the role came across her desk, it was originally written as a man, but she sent in a self-tape anyway. By the time they asked her to meet in person, she was back in Kentucky at her mother’s memorial. “I was like, ‘Listen. I would love to do the part, but I’m not coming back right away.’ I really thought that was it,” she says. “But then they somehow picked me up.”

In Smith-Cameron’s hands, Gerri has become a joyfully mischievous counterbalance to the self-destructive cruelty of the Roys; moral without being sanctimonious, commanding but still likable. She thinks Gerri has daughters — “they’re very strong and very bright, [went to] the best colleges, had great careers, and are a little scared of her but very adoring,” she says — but we don’t see them on screen. What we do see, however, is a surprisingly sexual dom-sub relationship with Kieran Culkin’s Roman Roy, which was written into the script because the two couldn’t stop flirting with each other while filming. Her relationship with Culkin goes way back — they first worked together in 2005 on the film Margaret, which was written and directed by Lonergan — but she was still anxious about how the audience would react to their first phone sex scene. “I thought they would hopefully not be downright repulsed, but maybe a little [repulsed],” she says. “I was really worried.”

She needn’t have been; their lust for one another is now a central part of the show’s appeal. Recent promotional materials feature a portrait of Gerri towering behind Roman, looking like quite the cat and mouse, and when the cast appeared on The Late Show With Stephen Colbert last week, they dedicated an entire segment to speculating about what would happen between Roman and Gerri in Season 3. When asked about it, Culkin simply replied, “I don’t know; J’s hot,” and during Succession’s pandemic-induced extended hiatus — the series was in pre-production when the world shut down in March 2020; filming reportedly began the following November — it was their relationship that Smith-Cameron was most eager to return to. “I was hoping that she would take this misdirected sexual energy and turn him into a great business [partner]. That they would have fun cloak-and-dagger power plots,” she says. “I mean, they could break up in the first episode or get married in the first episode.”

What actually happens in Season 3 might surprise fans of Roman and Gerri, but the thirst will surely continue — and not just for Smith-Cameron. A lot of people apparently want Sarah Snook’s Shiv to “step on their neck,” while Nicholas Braun, who plays Cousin Greg, has become a DeuxMoi favorite and one of social media’s most eligible bachelors. “Oh my God. What a sensation,” Smith-Cameron says of the latter. “Do you think that because he seems so aimless, they think he doesn’t have offers or something? Like, that he’s available?” I explain that I’ve seen 50 girls throw themselves at him during a recent event. “He’s very, very appealing,” she says slowly. “Very smart, very funny, and very kind — all kinds of things I’d crush on — but I don’t think of him as like a sex machine.”

But people probably said that about Smith-Cameron too. Women older than 50 only take up 8% of screen time and when they do, they’re rarely sexually desired widows with invisible children. In this context, her newfound objectification is surely a win, and maybe even an ego stroke? “I’ll tell you what,” she says, taking another sip of rosé. “It amuses me.” And isn’t that enough?