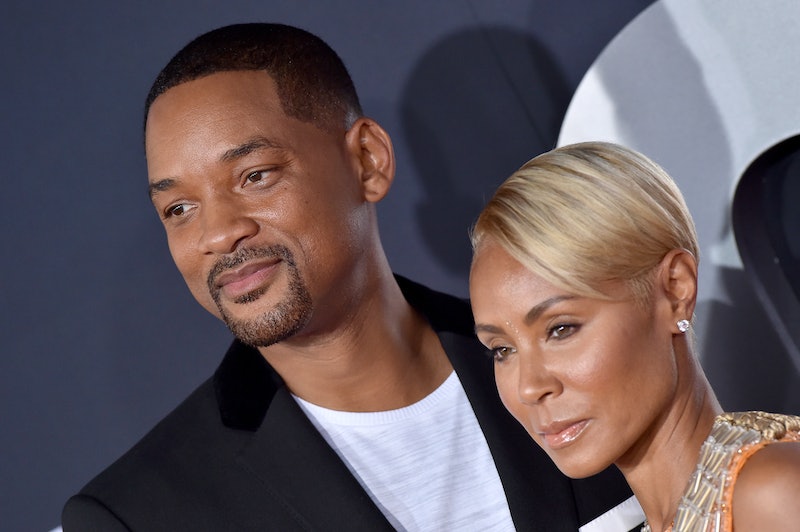 A week after Jada Pinkett Smith promised fans she would be bringing herself to The Red Table, she did just that, sitting down for a conversation with her husband. In the newest episode of her Facebook Watch show Red Table Talk, Jada and Will Smith responded to August Alsina's claims that he and Jada had an affair, and revealed quite a bit about their marriage in the process. Jada teased the episode on Twitter, writing, "here's to the journey."

The episode, titled "Jada Brings Herself to the Table," featured just Will and Jada — no special guests dropped in via video chat, and Red Table Talk co-hosts Willow Smith and Adrienne Norris were absent. "This Red Table, for me, is just — all the stuff that's going on in the press, I felt like it was important to come to the table to really clear the air," Jada kicked off the discussion, setting the tone for the 13-minute episode. Will agreed, saying that this would be the first time they decided to speak publicly on the rumors that have been running wild for the past few weeks.

It all started when Alsina claimed that he had an affair with Jada "for years" during an appearance on The Breakfast Club on June 30. He went on to say that he still has "a ton of love for her" and added that he and Jada's relationship was done with Will's "blessing."

A representative for Jada responded to Alsina with a statement calling the claim "absolutely not true," but the singer stayed true to his statements. However, it seems there was some truth to Alsina's claims after all. On Red Table Talk, Jada admitted that she and Alsina had a romantic relationship about four years ago, when, unbeknownst to the public, she and Will had separated. "You and I were going through a very difficult time," Jada said on the show. "I was done with your ass," Will responded, laughing. "Marriages have that though," he added. Both agreed that they felt, at the time, that their marriage could be done for good. "I really felt like we could be over," Will explained.

From there, Jada admitted, she got into "an entanglement" with Alsina, but wanted to make clear that Will had nothing to do with it — and she certainly didn't ask or need his blessing. "The only person that can give permission in that particular circumstance is myself," Jada said. However, she added that she understood how the singer could have perceived Will's blessing of their relationship, as the two were separated at the time. "I was in a lot of pain, and I was broken," Jada continued. "And in the process of that relationship, I definitely realized that you can't find happiness outside of yourself."

Jada claimed that her relationship with Alsina stopped when she and Will started to work through their problems and "heal," saying that the singer decided to "stop all communication, which was totally understandable." The couple didn't seem to hold any ill will towards Alsina for his comments, though they admitted it was a little weird to be revisiting their personal drama a few years after the fact. "I'm grateful for the journey you and I have had together," Jada told Will, adding, "The one thing I will say about you and I is that there's never been secrets."

Though the two have worked to get through all their ups and downs, Will made sure to point out that it isn't as easy as they might make it sound. "There's a real power in just knowing somebody's riding with you no matter what. And you really can't know that until you go through some stuff," he said, jokingly adding, "I don't wanna go through this no more." The talk ended with a few more laughs, and a supportive high-five, showing that, despite anything that might be written about the couple, they're still going strong.