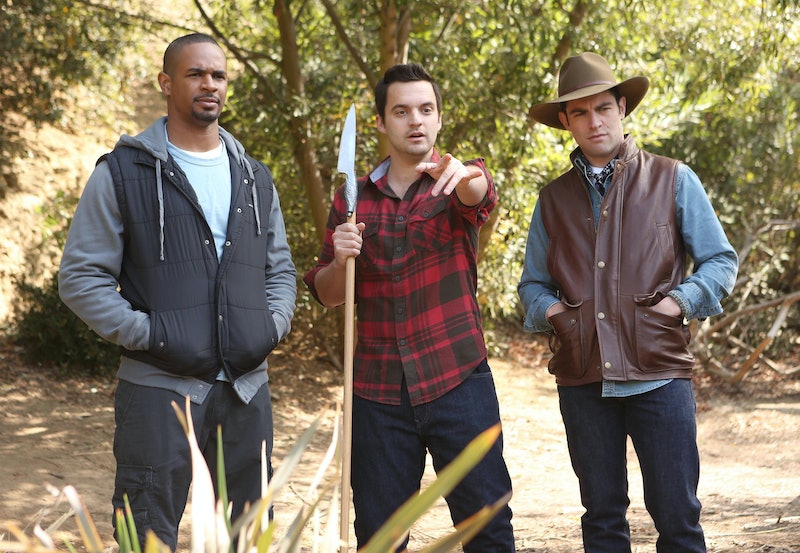 The residents of the loft are getting back together. Jake Johnson's Hoops will feature some New Girl cast reunions, including appearances from Max Greenfield (Schmidt), Hannah Simone (Cece), and Damon Wayans Jr. (Coach). It seems almost the whole loft will be on board for the new Netflix animated comedy, although New Girl viewers will certainly be wishing Zooey Deschanel, who starred as Jess, and Lamorne Morris, who played Winston, were also dropping by. Still, seeing — or hearing — Nick, Cece, Coach, and Schmidt in the same show together is the closest thing to a New Girl reunion fans have.

Johnson revealed the exciting cast news on Sunday, July 26, during a Hoops Comic-Con @ Home panel, moderated by Greenfield, ahead of the series August 21 premiere date on Netflix. And it's not just members of the main New Girl cast who were invited to Johnson's new show. Cleo King, who guest starred in the 2014 New Girl episode "Background Check" as Sergeant Dorado, was top of mind for a role in Hoops based on that performance. "I had fun on that show, I had a great time, I got to play a hardass." King recalled of her stint on New Girl during the Comic-Con panel. "That's how we remembered you, Cleo" Johnson responded, "When we were looking for this part, I remembered you in New Girl crushing it." And that's not all. Hoops will also co-star Rob Riggle, who played Schmidt's brother on New Girl.

Other cast members include Natasha Leggero as Hopkin's wife Shannon, Ron Funches as Hopkin's best friend and assistant coach Ron, King as school principal Opal, and A.D. Miles as Ben's 7-foot star player, Matty. While all the casting news might be exciting, New Girl fans will be especially thrilled to hear that their favorite residents of the loft are returning for a few episodes, though little is known about their characters just yet.

Hoops was created by Ben Hoffman, best known for the Late Late Show, who coincidentally guest-starred on New Girl as well, appearing in the episode "Injured" in Season One. The show, which doesn't seem likely to propel Coach Hopkins to the great success he hopes for, seems a bit raunchier and bleaker than a standard episode of New Girl. However, for anyone looking for more of Johnson's signature curmudgeonly acting style after binge-watching the sitcom, the show promises to be a satisfying watch.

In addition to Greenfield, Simone, and Wayans Jr.'s guest spots, the show will also feature will feature plenty of other exciting familiar voices, including comedians Nick Swardson, Sam Richardson, and Will Forte. Hoops drops on Netflix on August 21. But here's the real question on all New Girl fans minds — will Furguson the cat be making a cameo?

More like this
Netflix Shut Down 'Bridgerton' S3 Rumours About A “Very Dark” Storyline
By Bustle
'The Queen’s Gambit' Season 2 Tweet Wasn’t From Anya Taylor-Joy
By Mary Kate McGrath, Jack Irvin and Grace Wehniainen
Ashton Kutcher Wants Danny Masterson “To Be Found Innocent” In Rape Retrial
By Jake Viswanath
At 28, Debra Jo Rupp Was Living A Much Different '70s Show
By Grace Wehniainen
Get Even More From Bustle — Sign Up For The Newsletter
From hair trends to relationship advice, our daily newsletter has everything you need to sound like a person who’s on TikTok, even if you aren’t.