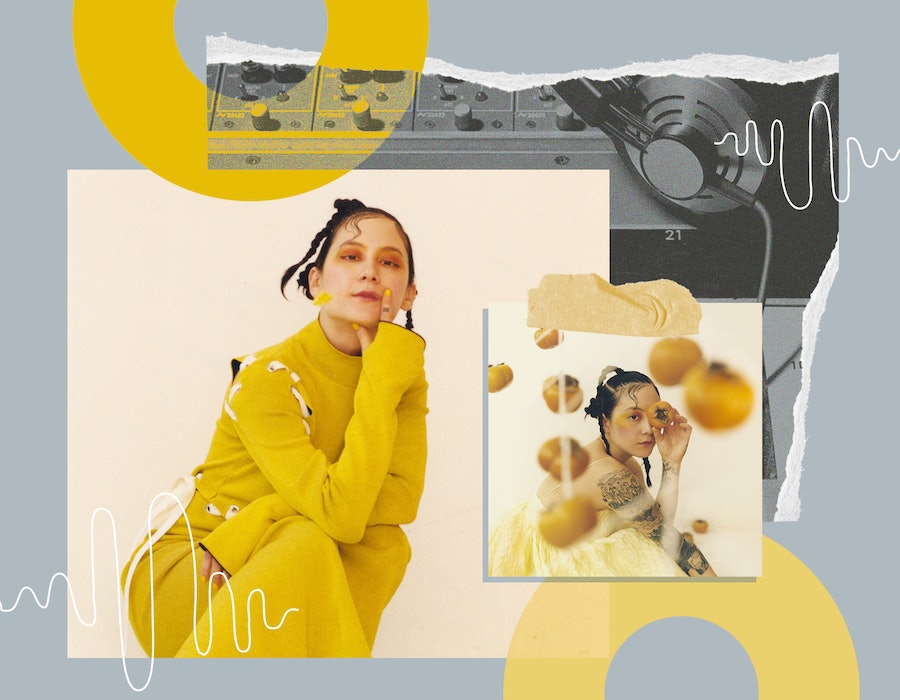 Since she was a kid, Japanese Breakfast frontwoman Michelle Zauner has had a soft spot for the everyday moments most of us wouldn’t notice or remember. The peace of watching her dad burn blackberry bramble during the lush Oregon summers. The Korean comfort food her mother gravitated towards while going through chemo. The bath toy 5-year-old Zauner waved around at her very first concert (she saw beloved children’s music star Raffi). “I have always been a really sensitive person,” Zauner tells Bustle. “I was very moved by small human gestures from a young age.”

For Zauner, the process of writing — initially as a musician and most recently as a nonfiction author with her bestselling memoir Crying in H Mart — has become her way of recording these blink-and-you’ll-miss-it moments. Zauner’s first two albums as Japanese Breakfast were awash in grief in the wake of her mother’s death. Her memoir fills in the blanks from that time, detailing the end of her mother’s life and the eventual healing Zauner found in Korean food, in grocery stores, and through her childhood memories. It’s why, after making art out of her loss, her new album Jubilee feels like a zag: As its name suggests, Jubilee is about joy.

Zauner describes the album as filled with “bursting ecstatic happiness,” each song a chance for her to celebrate after years of being immersed in loss. This liveliness is all over the lyrics, but is especially evident in the album's poppier, synthesizer-laden sound. “After having this really insular, nerve-wracking, foreign experience of writing a book for the first time, I felt really excited to write a record and kind of fall back into a familiar lover's arms,” Zauner says. “It’s so much less lonely, and I feel so much less stupid doing it.”

Zauner wrote Crying in H Mart over the course of a few years while touring — writing at soundchecks, in the car during tour stops, and in hotel rooms all over the world. It was a labor of love completely outside of her comfort zone. Jubilee poured out of her in the matter of a few months. “I have a lot more trust with my intuition,” Zauner says. “I definitely figured something out with this new record.”

Below, Zauner muses about what joy means to her, almost quitting music at 25, and being a Barbra Streisand superfan.

On Finding Joy & Not Always Having Time To Make Kimchi

What does “jubilee” mean to you? What makes you feel joyful?

I am really lucky that my career has been these really heightened moments of intense dopamine of playing shows for lots of people, so I feel like I am most joyful when that is going well — I get to have thousands of people celebrating my art. I think eating really good food makes me really joyful, sharing a meal with my loved ones. I like when the weather changes to summer and you get to eat outside for the first time.

Your memories and experiences have been front and center in your previous albums as well as in your memoir. Have you always been someone who writes to understand yourself and keep these memories close?

I think it was hard in the sense that I don’t keep a diary and I don’t feel like I have a very good memory, but I do think that being a musician and looking through moments and relationships with a sort of creative lens is something that I’ve always done since I was a kid. I hate people but I’m also profoundly moved and fascinated by them, in a way. I have very tender feelings towards the ways that people interact with each other and hurt each other or love each other.

Did your relationship to food change through writing Crying in H Mart, which is so wrapped up in food and cooking?

Yeah, I feel some guilt because people’s image of me is probably like hunched over an ancient onggi, making kimchi all the time, and I don't have time to do that all the time, so I feel pressure in this new way. I think I came to realize all of the different reasons why I so naturally turn to [food] as a type of therapy for myself. I think one thing I didn't realize was I was probably psychologically undoing a lot of the sense of failure I felt about caretaking and not being able to make certain dishes for my mom. Recounting the things I did in the wake of her loss made that much more clear to me.

How did you balance writing your book while being a full-time musician?

Touring is a lot of work, but it is also a mindless grind, and there is a lot of downtime, just sitting in the car, in between soundcheck and showtime. I just tried to be disciplined about doing this word vomit for an hour in the car, or in between showtimes or on the plane in all these different places, and that was really helpful for me. I forced myself to write 1,000 words every day until I hit 90k, and that gave me the freedom to get through a lot of bad writing and really be okay with that and trust in the process of revision. Sometimes that raw source material needs to be pushed out forcefully in this way.

Do you have a song from Jubilee you’re especially proud of?

I have a really soft spot for “Kokomo, IN” and I think part of the reason is [what] someone asked me today: Do you think good art is easier to make when it’s rooted in pain? I feel like that is why I have such a soft spot for Kokomo. It was such an easy song to write, it has no pain at all. It is just a purely sweet, nice, sentiment. It felt like I had really made something totally separate from agony in every sense of the word. It was one of those songs that came together really naturally, it didn't put up a fight. It knew what it wanted to be and lyrically it came from this very tender and soft happy place. It’s some of my favorite lyrics I’ve ever written and I love the arrangement.

That is a really good question. I want to answer this so well. I do love Barbara Streisand. Not that surprising, but I am a big Babs fan. My mom was a Babs fan, there’s a scene in the book where we sing this song called “Tell Him” which is a duet with her and Celine Dion and my mom introduced me to her. One of my mom’s favorite movies is The Way We Were and she also loved Yentl, so I saw those movies when I was young. Barbara is just the GOAT — she’s the most incredible actress, writer, director, singer, and so intelligent. Grace incarnate. I love her.

What’s a song that played at your wedding?

My husband and I danced to “Rainy Days and Mondays” by The Carpenters.

There is a song called “Haenim” by Kim Jung Mi. That song always really moves people, it is an obscure international song, so I try to show off with that one.

What is the weirdest thing you’ve written a song about?

I was reading the news and I saw a line about billionaires buying bunkers and I thought, that is terrifying, and I was just fascinated by this high level of wealth hoarding and greed. So I wrote “Savage Good Boy” from the perspective of a billionaire coaxing a young woman to live with him in a bunker. In the music video for that, Michael Imperioli is my daddy, my sugar daddy.

Was there a moment you felt ready to give up on musician life, and if so, what got you through it?

Right before Psychopomp came out, I had moved to New York and I was working a job in advertising and I had very much set it aside and my husband was like, “I really don't think you should let this go.” And I was like, “You have no idea how long I've been trying to make this happen. I'm 25 years old, if it’s not happening now, it’s never going to happen.” And of course, that was the record that did well for the first time.