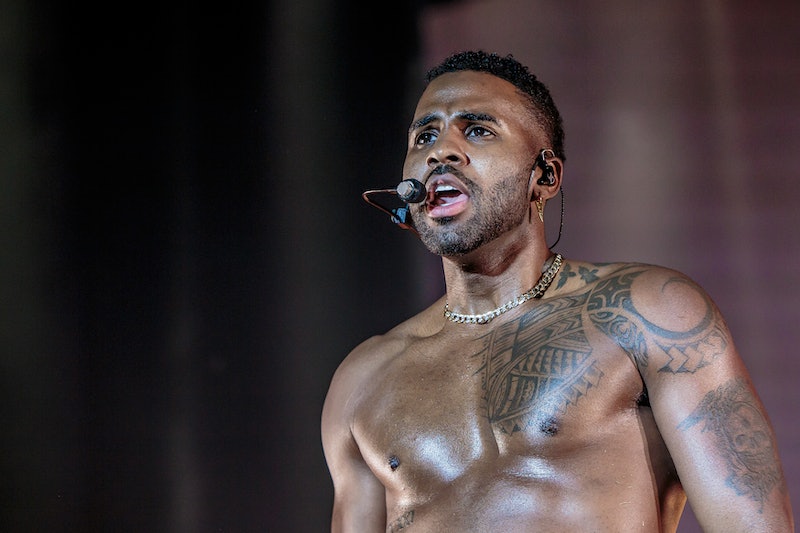 From now on whenever someone sings “Jason Derulooo,” they could be talking about two different people. The 31-year-old pop singer shared the most wonderful news of all on May 18: He is now a father. The “Savage Love” singer-songwriter announced the birth of his first child with model girlfriend Jena Frumes via his Instagram. The pair named their son Jason King Derulo, which makes him a junior.

The powerhouse vocalist’s post included a heartwarming video that shows everything from the trip to the hospital to the first time he held his newborn son. It’s hard not to choke up at the clip, and it is clear that Derulo is touched and emotional as he lays down with the child. The singer captioned the visual by calling the event “the happiest day of my life.” Derulo went on to declare that his girlfriend is “a strong caring hero of a mother” and that his baby boy is “lucky” to have her as a mom.

Derulo and Frumes reportedly met at a gym in 2020, and they quickly developed a romance that has now gone to the next level. They announced that they were expecting a child, the first for both, this past March, just two months before the youngest member of the family arrived. At the time, the musician exclaimed that he “couldn’t be more excited for this new chapter” of his life.

Frumes also unveiled the news at the same time, though she did so with a series of photos of her and Derulo in the hospital, the baby (with his face covered for privacy reasons), and a shot of her pumping breast milk, sharing what that process looks like for her. The model called her son their “healthy handsome little king,” just as any new mom would.

The arrival of Derulo’s son comes at a particularly great time for the singer, as he has been enjoying a busier-than-normal period of success. After hitting something of a slump on the charts and disagreeing about creative endeavors with his longtime record label Warner Brothers, the global star departed the company and has been steering his own career for more than a year now.

In that time, he’s become a massive TikTok star, he’s churned out an incredible amount of music, and he even scored another No. 1 hit all around the world with the song “Savage Love (Laxed – Siren Beat),” which also featured Jawsh 685 and BTS. He has also recently released singles like the poppy hit “Take You Dancing” and “Lifestyle” with Maroon 5’s Adam Levine.

More like this
What Demi Lovato Really Thinks About Child Stardom, Depression, & Sobriety
By Radhika Menon
Who Is Nick Cannon Dating & How Many Kids Does He Have?
By Jordyn Tilchen and Radhika Menon
Everything To Know About Taylor Swift’s 10th Studio Album, 'Midnights'
By Grace Wehniainen and Jake Viswanath
Lizzo Twerks While Playing James Madison's 200-Year-Old Crystal Flute Onstage
By Radhika Menon
Get Even More From Bustle — Sign Up For The Newsletter