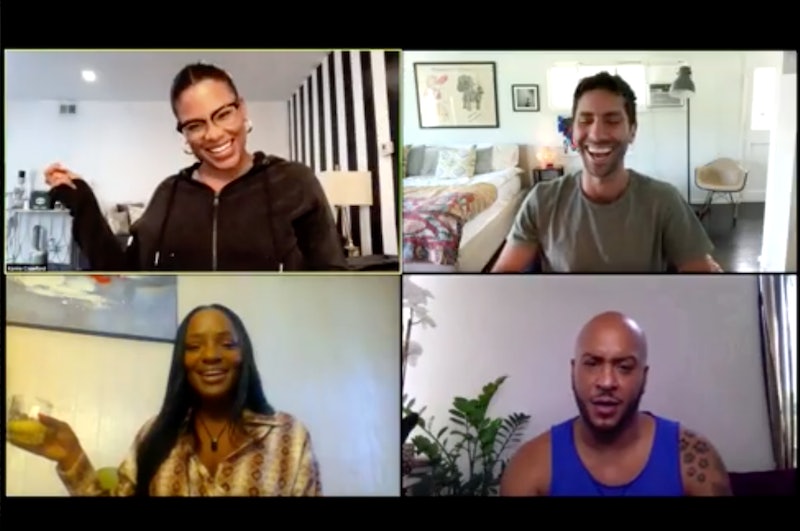 Not even a global pandemic can stop Nev Schulman and Kamie Crawford from exposing another sea(son) of catfish. The pair returned on Wednesday for the remotely filmed premiere of Catfish Season 8, in which they investigated the relationship between Jason and Tayy (aka Keith).

According to his website, Jason works as a celebrity stylist for stars like Tina Knowles, Carmen Electra, and Real Housewives of Atlanta's Cynthia Bailey. He met Tayy online after his career began taking off and Tayy slid into his DMs as Keith. Jason was flattered and returned the compliment. But then came the red flags. The two continued to talk for two years yet never met in person or FaceTimed. At one point, Tayy even asked Jason for $800 to replace his "broken phone," and still refused to video chat. That was the last straw for Jason's good friend Tamirra; she called Nev and Kamie for help.

It didn't take long for the pair to determine Keith's Instagram was fake (he apparently couldn't come up with a better username than @keithmodelboy). When Jason finally met Tayy, he didn't seem apologetic at all. He admitted to using Jason's money to buy a pair of Christian Louboutin shoes — not a phone — and oh yeah, he had a fiancé. At that point, Jason was fed up and ready to move on, and according to the show's post-filming update, he did. He began chatting with (and yes, FaceTiming) a new guy in Texas, and looks forward to meeting him as soon as it's safe. If they remain in contact today, their relationship isn't Instagram official, because there's no sign of a new guy on Jason's profile — only hair content and promo for his Catfish episode. Regardless, he seems to be happy.

Tayy's account for Keith is surprisingly still active. His last post (which is clearly a stolen image) was shared on March 31. According to his post-filming update, Tayy and his fiancé broke up, and there's no evidence of a romantic relationship on his personal Instagram.

He most recently shared information about his OnlyFans account and showed off a new designer bag and stacks of cash. He's also shared multiple videos of him hanging with Love and Hip Hop New York star Sidney Starr. So, do with that information what you will.

More like this
The Bachelor’s Christina Mandrell Comes From One Of Country Music’s Most Famous Families
By Brad Witter
Brianna Revealed Why 'The Bachelor' Premiere Was Tougher For Her Than You Saw On TV
By Brad Witter
A Guide To All Of Zach Shallcross' 'Bachelor' Filming Locations
By Brad Witter
Joey Essex Is Rumoured To Be Dating A 'Love Island' Favourite
By Sam Ramsden
Get Even More From Bustle — Sign Up For The Newsletter
From hair trends to relationship advice, our daily newsletter has everything you need to sound like a person who’s on TikTok, even if you aren’t.