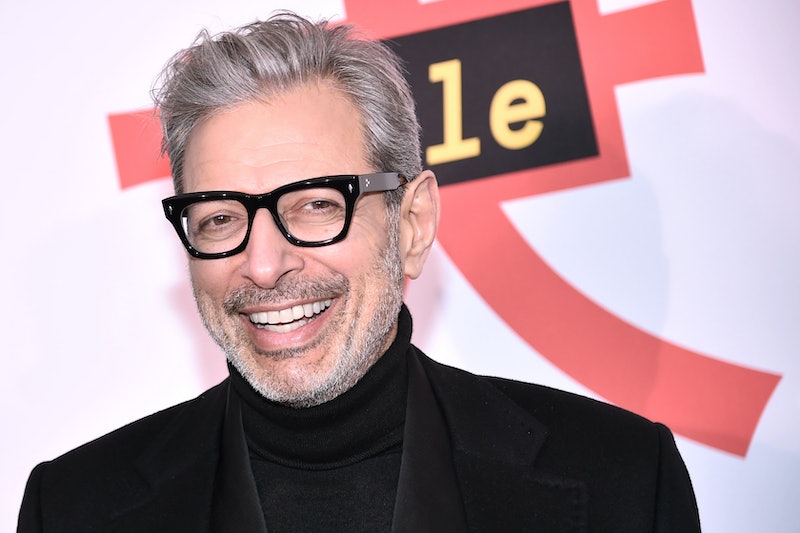 If Jeff Goldblum's bare chest doesn't convince you to register to vote, nothing will. That theory was put to the test on Saturday, Oct. 10, when Jeff Goldblum recreated his shirtless Jurassic Park scene on Instagram, as part of his campaign to encourage Americans to vote in the upcoming 2020 presidential election. The actor teamed up with Head Count, a nonpartisan organization that uses music and pop culture to "promote participation in democracy," for their ongoing #GoodToVote campaign ahead of Nov. 3.

"WOW! Thank you to everyone who used my @HeadCount page to make sure that you’re #GoodToVote!" Goldblum wrote on Instagram, revealing that "nearly 3,000" people registered to vote, checked their status, or requested a ballot in response to his support of the campaign. And, as he had previously promised, Goldblum gave fans a "reward" for their participation: a photo of him, lounging in an open black button-down and black leather pants, just as Dr. Ian Malcolm famously did in 1993's Jurassic Park.

"Here’s your reward…how time flies," he wrote. This is not the first time that Goldblum has used his iconic character to encourage fans to vote in the upcoming election; on Sep. 22, he reunited with Jurassic Park co-stars Laura Dern and Sam Neill to celebrate National Voter Registration Day, and on Oct. 3, he recreated the blockbuster's "Chaos Theory" scene with the pair for social media. Goldblum, Dern and Neill will all reprise their roles in Jurassic World: Dominion, which is set for a 2022 release.

In addition to introducing generations of Jurassic Park fans to his abs, Dr. Malcolm's shirtless scene is particularly memorable because it was entirely Goldblum's idea. In a 2018 interview with Yahoo!, the actor revealed that he was inspired by the movie's tropical location to unbutton on a whim. "It’s supposed to be Costa Rica, right? So things are hot and I’m sure I’m in some sort of fever," Goldblum said at the time. "So all the logic is that we gotta get some of these wet clothes off immediately. As I remember, I don’t think anybody fought me on that."

Around the same time, Uproxx reported that Goldblum confirmed the moment was completely improvised during a Jurassic Park 25th anniversary celebration. "I asked Jeff Goldbum during #JP25 what he remembers about shooting his iconic & smoldering shirtless scene. He told me it WAS NOT scripted," reporter Dan Seitz wrote on Twitter. "The AD was on stage and confirmed Goldblum made the decision to unbutton his shirt and everyone just went with it. What an absolute legend."

While that smoldering shirtless moment certainly didn't hurt, Goldblum thinks that there is another reason that Dr. Malcolm still holds such a special place in fans' hearts, nearly three decades later. "As it happens, there are things that my character talks about, has always talked about," he said during an episode of PeopleTV's Couch Surfing in September, explaining that Dr. Malcolm was ahead of his time. "The fragility of our species and the global cooperation that's needed, and the foundation in science that's needed. ... And to reach our potential and do right by ourselves and this glorious planet. All of those things are now more relevant than ever."

And many of those themes will be at play when he teams up with Dern and Neill once again for Jurassic World: Dominion. "Already in this plot, there are thing[s] we're finding are already apropos," he said. Hopefully that means there will also be another inexplicably sexy moment for Dr. Malcolm in that film.