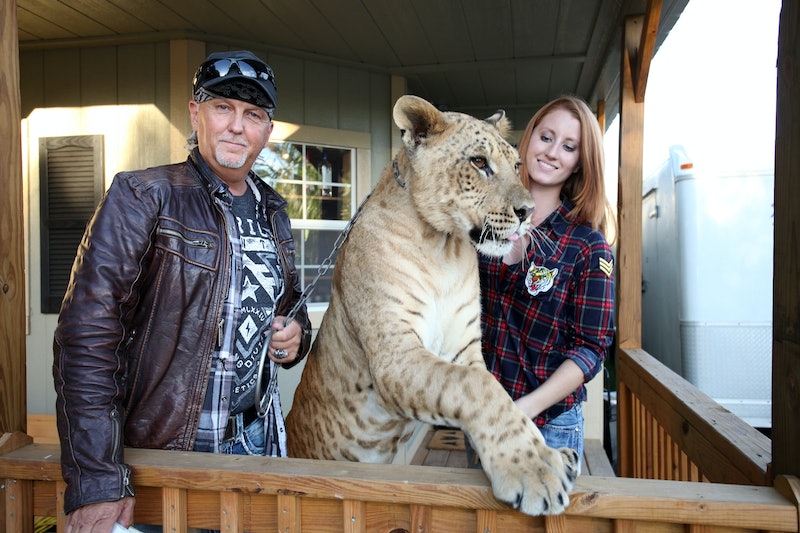 Those who watched Season 1 of Tiger King know that Joe Exotic had to cede control of his zoo to Jeff Lowe in 2016. But since the show aired, Lowe, too, has lost ownership of the Oklahoma property. In an ironic turn of events, a judge granted Carole Baskin ownership of the zoo in June 2020 as part of her lawsuit against Exotic's former company, also awarding the Big Cat Rescue owner vehicles and cabins on the premises, per CNN.

The ruling ordered Lowe to vacate the property within 120 days and remove all zoo animals. He remained at the zoo — renamed Greater Wynnewood Exotic Animal Park — until August before permanently closing the park. "The Tiger King phenomenon has definitely changed our lives in many ways," he wrote in a since-deleted Facebook post, per People. "It has, and probably will continue to make us a target of every nutjob and animal rights loon in the world, but we are prepared."

Lowe said at the time that he'd voluntarily forfeited his United States Department of Agriculture exhibitor's license. But a USDA report indicated that his license was actually suspended in July following an inspection of the park that found multiple violations including several repeat infractions, People reported.

Baskin offered Big Cat Rescue's aid in re-homing the animals still at the zoo, but Lowe declined, explaining to People that he was moving them to his new Oklahoma Tiger King Park, which was scheduled to open in September 2020. He also claimed that he and his wife Lauren Lowe planned to film a new reality series. "It'll be our narrative on the Tiger King with evidence to support our sides of the stories," Lowe told the magazine in June 2020. "And it will be about the transfer of all these beautiful animals from Joe's facility to the new facility."

However, the park appears to remain closed, and several animals have been removed from the Lowes’ custody. In September 2020, PETA spokesperson David Perle confirmed to USA Today that a court order had authorized them to seize three big cats from Lowe's shuttered zoo. The Lowe's attorney Walter Mosley claimed that neither Lowe nor his animal park owned the animals.

"Mr. Lowe, out of his love for animals, has been caring for these big cats, free of charge, in his facility, simply awaiting for the Indiana courts to determine where they will be placed," Mosley said in a statement to People. "Once we got word where the court would like the lions to be placed permanently, we happily complied and sent these wonderful cats to Colorado. Mr. Lowe is excited that the lions have a new amazing permanent home."

In November 2020, the Justice Department accused the Lowes of violating the Endangered Species Act and the Animal Welfare Act by jeopardizing their animals’ health and exhibiting them without a license. Over the course of six months, the USDA inspected Tiger King Park three times and issued citations for failing to provide the animals with adequate or timely veterinary care, appropriate nutrition, or shelter that protected them from the weather. The Lowes were also found in contempt of court orders that required them to establish and maintain a veterinary care program that met the standards set by the Animal Welfare Act, per The New York Times.

In May 2021, federal authorities confiscated 69 big cats from the Lowes’ Oklahoma park. The prosecutors’ 52-page affidavit alleged that the couple had illegally sold, purchased, or transported a jaguar, seven lions, 46 tigers, and 15 lion-tiger hybrids. According to an affidavit, the animals kept at Tiger King Park had also been “harmed and harassed.” (The Lowes’ lawyer previously claimed that the couple was “consistently caring and kind stewards of animals in their care” and that the government had constructed a “fictional interpretation” of the Animal Welfare Act, per The New York Times.)

Weeks after the raid, both Lowes were arrested for DUIs in Oklahoma City. According to a copy of the incident report obtained by People, officers spotted Jeff Lowe driving the couple’s white Range Rover over a curb before Lauren Lowe took over driving. The report also stated that the two exhibited slurred speech and “a strong odor commonly associated with the consumption of an alcoholic beverage” on their breaths. A breathalyzer reportedly revealed Lowe’s blood alcohol level was 0.18.

Lowe also previously suffered a stroke in March 2021, and Lauren found him unresponsive in their room at an Oklahoma casino. Though blood and urine tests came back negative for common drugs, the pair suspected Lowe was poisoned by a mystery man who bought them drinks during a dinner date hours before he collapsed. He spent three days in the hospital before returning home with speech and coordination difficulties.

The pair, who now run Cameo and OnlyFans accounts, shared a video to the Tiger King Park Instagram account on Oct. 25 revealing that they recently spoke to Exotic on the phone for the first time in years. “We promised him we’d help expose the corruption and help get him out,” the caption read, in part.