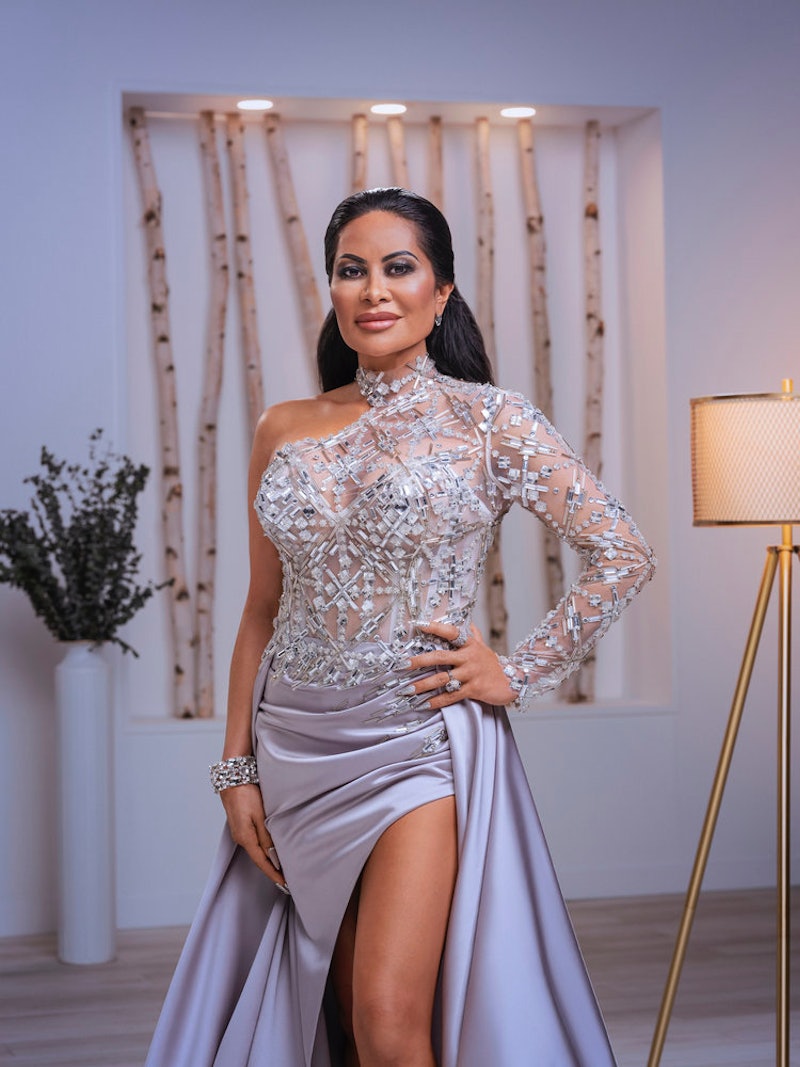 Jen Shah learned a valuable lesson while filming Bravo's The Real Housewives of Salt Lake City: not everyone approaches conflict the way that she does. "I react very passionately because I expect people to show the same level of loyalty as I do, and I've had to kind of understand in this group of six ladies that not everybody is going to react the same way as I do," she tells Bustle. "The challenge is navigating through that and figuring out how to adjust to staying true to myself, but also keep our friendships intact."

Admitting that she's "very direct" and can go from 0 to 100 pretty quickly, Jen tells it like it is and always addresses issues head-on. That's perhaps most apparent in her adversarial relationship with co-star Mary Cosby, whom she says she initially thought would be her confidant because they both grew up as women of color in the predominantly white Salt Lake City. "Then I saw she had a totally different experience, and whereas I really grasp and take hold of my culture and my ethnicity and my family, she's like the opposite and I just have a hard time wrapping my head around that," Jen explains.

Even so, Jen — who's closest to castmates Lisa Barlow and Heather Gay — insists that everyone on RHOSLC is "very cordial and supportive," and she hopes to someday talk to Mary about race one-on-one. "I hold true to my beliefs and know the right thing to do is treat people equally, so if she can stand behind that, then I'm totally open to having that conversation with her," she says.

Learn more about the self-described "fun, over-the-top" new Housewife below.

Jen met her husband Sharrieff while attending Salt Lake City's University of Utah in the early '90s. Because Sharrieff's job as a coach for their alma mater's football team requires him to be away from home a lot, Jen says they sometimes have a "FaceTime marriage," though it works just fine for them. "I'm very independent and I'm not at home waiting for him to get off work, " she explains. "I'm like 'OK, I'm opening three more offices, I'm in New York, and you're busy, I'm busy. You're going to have to call my assistant and get scheduled in."

Jen and Sharrieff are also parents to Sharrieff Jr., 26, and Omar, 16. She says she's "always more of the good cop," adding that parenting two young Black men has presented challenges her mostly white community doesn't have to worry about. When Omar goes running as part of his football workouts, she either won't let him go after dark or follows alongside him in her car. "If they see a Black boy running at 10 at night with his hoodie on in this gated community, they're going to think he's robbing someone," she says. "This is just everyday for me, where I have to protect my kids and think about things differently."

Though Jen was raised Mormon, she converted to Islam, her husband's religion, around 1999. She made the decision after Sharrieff Jr. was born and she discovered that "Blacks weren't fully accepted into the [Mormon] church." Though Black people are allowed to attend church, they aren't able to hold the priesthood and "aren't looked at as equal" in the Mormon religion, she explains. "I was like how do I subscribe to this when I can't justify the reason to my husband and my son and future kids who are Black? My husband is such a good person, so I decided that's how I wanted my sons to be raised, with those same values."

Jen is Tongan, Hawaiian, and a "little bit" Chinese, something that she says has always caused her to stand out in Salt Lake City. "There wasn't a lot of diversity when I was young, so because I was much darker than everyone else and my hair is curly when I don't have a wig or Brazilian blowout, everyone in Utah assumed I was Black. Growing up in Utah, if you're not white, you're Black."

As fans will quickly discover on RHOSLC, Jen is an undeniable fashionista, and her Instagram account has plenty of proof. One recent standout? A custom Biden-Harris dress that her personal designer Koa Johnson crafted from extra campaign signs they took after attending a Vice Presidential debate at Salt Lake City's Kingsbury Hall on Oct. 7. "We wanted to do something to make a statement to support Biden-Harris," she says. "I'm very passionate about social issues, like Black Lives Matter, and it was time for a change."

Jen is the CEO and founder of JXA Fashion, Shah Beauty, and The Real Shah Lashes. Marketing is "the core business" she's run for almost 20 years. "I'm actually a nerd at heart," she says, noting her love for numbers, spreadsheets, algorithms, data points, and "all the other stuff everyone else finds boring." Jen explains that her companies handle direct response marketing, and though about 90% of the work is now online, she used to specialize in infomercials, direct mailing, and print. She jokes that she's "like the Wizard of Oz, the person behind the curtain that nobody sees, but nobody knows how things are working."

With so many moving parts in her career, Jen says "it takes a village" to support her. RHOSLC fans will see that she has several assistants, and she recently added three more to help out during the COVID-19 pandemic.

"There ain't no party like a Jen Shah party," she quips, adding that it’s important that everyone knows she is the best host in Utah. Attendees of her "over-the-top" parties can always expect the unexpected, which is why she loves entertaining so much. "When people come to one of my parties, they know there's going to be some element of surprise, or it's not really what the invitation says," adds Jen. "It's never as cut and dry as a simple cocktail party."