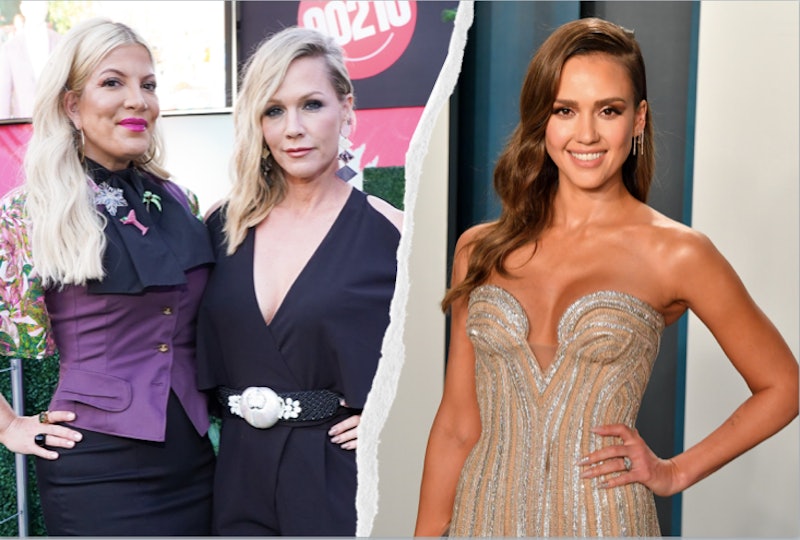 It's been one week since a famous actor said she was "not allowed" to make eye contact with the stars during her guest stint on Beverly Hills, 90210. Now, Jennie Garth and Tori Spelling are responding to Jessica Alba's claims, setting the record straight on their new podcast 90210MG. Alba guest-starred as Leanne, a pregnant teenager, on BH, 90210 in 1998. And while both Garth and Spelling remembered her being on set, neither could recall having told the actor not to make eye contact, but they also made clear that they didn't doubt her claims.

Garth, who shared the most screen-time with Alba, admitted that "if anybody, you know, didn't want to have their eyes looked into, it would have been me," but said she didn't remember "because I have the world's worst memory." Spelling also defended their younger selves, noting that it's possible the direction came from the higher-ups noting that, there could have been a "memo that was, like, going around from the producers or the ADs" that the cast members "didn't even know" about.

Alba recently discussed her Beverly Hills, 90210 guest role during an appearance on Hot Ones, telling host Sean Evans, that she "couldn’t even make eye contact" with costars on the set. She added that it was "really strange when you’re, like, trying to do a scene with them," and said the direction stated explicitly that new actors were "not allowed to make eye contact with the cast members or you’ll be thrown off the set."

While Garth reported having only "vague memories" of working with Alba, she made it clear that she had nothing but respect for the actor and entrepreneur. In fact, she admitted that she was "a little horrified" seeing the clip because she's a huge fan of Alba's The Honest Company, which sells natural baby, household, and beauty products. "Like, I wipe my child's *ss with her baby wipes every single day. I'm so upset right now," Garth said of her initial reaction. The actor also heaped praise on Alba's guest turn on BH, 90210, noting, "She was very young. She was really sweet, and it does not surprise me that she's gone on to be so successful."

More like this
Hayden Panettiere Will Return For 'Scream 6': "We F*cking Won, Scream Fam"
By Jack Irvin and Jake Viswanath
The 'Hocus Pocus' Sequel Finally Has A Release Date & It Makes Total Sense
By Shannon Barbour and Radhika Menon
David Schwimmer Doesn't Remember This Classic 'Friends' Episode
By Sam Ramsden
'Derry Girls' Sister Michael Isn’t As Fictional As You Might Think
By Olivia-Anne Cleary
Get Even More From Bustle — Sign Up For The Newsletter