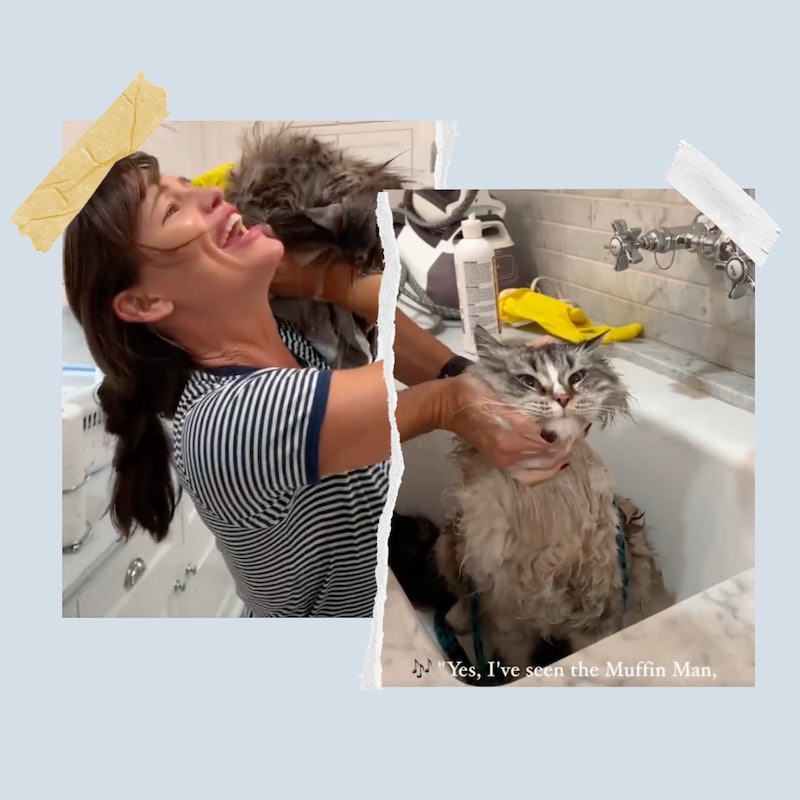 Jennifer Garner is many things. A top-notch actor, a mother, a philanthropist, and apparently, a cat wrangler. Sort of. A video of the Alias star recently went viral for all the best reasons, as it is simultaneously ridiculous and relatable. The viral cat video was posted by Twitter user Isabel Alcántara, who captioned it: “This video of Jennifer Garner bathing her cat takes up at least 1/4 of my mental real estate.” One viewing of the nearly two-minute-long clip will have anyone agreeing.

In the video, Garner attempts to wash her cat Moose, who had apparently “pooped his pants.” The 49-year-old entertainer then struggles to keep her feline friend in the sink, to get him clean, and to avoid being clawed. Those who bathe their own cats know that walking away from such an activity unscathed is impossible, and by the end, Garner has some nasty cuts on her neck.

While the video features Garner doing something fairly mundane, she’s hilarious and entertaining. Everything she says throughout the clip is an instantly iconic quote, including such gems as, “He’s befouled,” and, “What’s to be done?” At one point, Garner moves the cat’s head so as to make him sing, “Yes I’ve seen the Muffin Man!” Of course, at the end, when it seems like the ordeal is over, she realizes she missed a step: “Ooh. We didn’t get to do conditioner.”

It didn’t take long for thousands of Twitter users to watch the video and share it, making Garner’s cat-washing adventure quickly go viral. People obviously loved every second of it, and they made their adoration known via tweets.