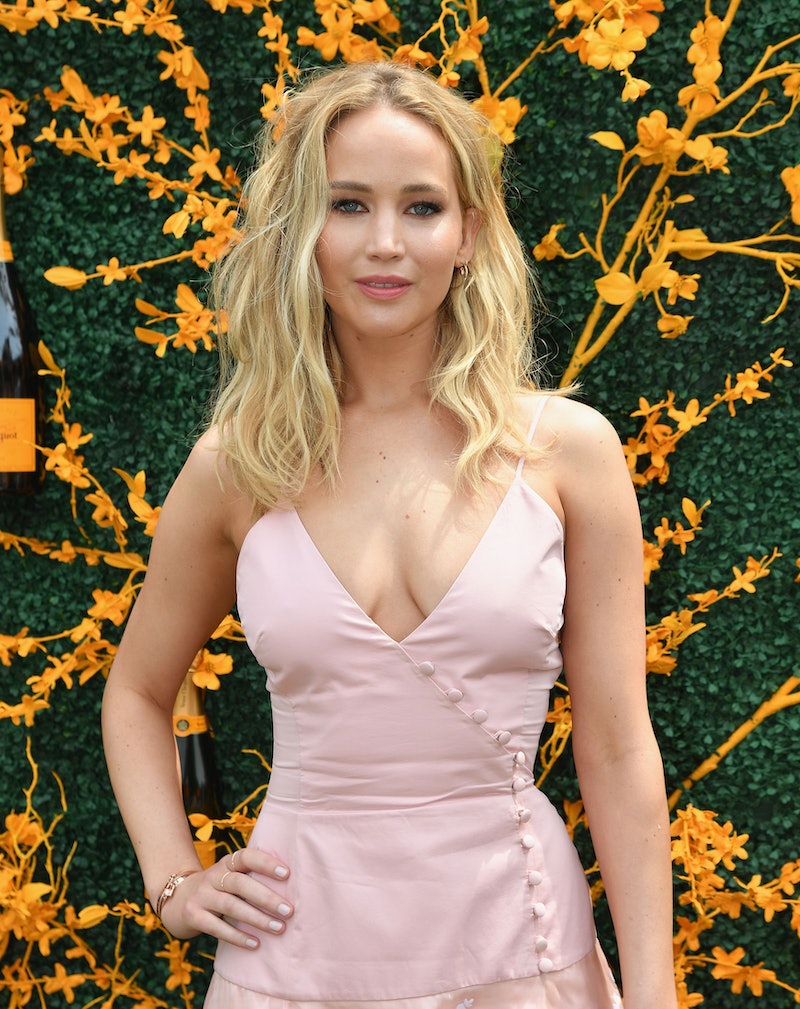 Production on Adam McKay's next star-studded project was halted when one of the A-listers on set was hurt. Jennifer Lawrence was injured while filming Don't Look Up on Friday, Feb. 5, reportedly after a stunt explosion went wrong. The Oscar winner was shooting a scene in a Boston restaurant when the blast caused flying glass to hit her near her eye. "An explosion was set up for a stunt in which glass shatters," a production source told Page Six. "It was a stunt in which the glass was supposed to shatter — but it injured her."

Though production was shut down for the day for Lawrence to get medical attention, a source close to the actor told E! News that she is expected to make a full recovery and "will be OK." It's unclear whether any of Lawrence's co-stars were on set at the time of the explosion or if anyone else was injured as a result of the stunt. Hours earlier, she had been spotted filming with Timotheé Chalamet while wearing a red wig with short bangs. Per TMZ, the pair were shooting a romantic scene, in which they reclined on a mattress and shared a six-pack of beer.

Don't Look Up stars Lawrence and Leonardo DiCaprio as two low-level astronomers who embark on a media tour to warn the world about an impending asteroid that could potentially destroy the planet. It's unclear what Chalamet's role in the film is, but he will be joined by other big names, including Ariana Grande, Chris Evans, Meryl Streep, Cate Blanchett, and Matthew Perry.

Lawrence recently suffered another personal tragedy when her childhood home in Kentucky burned to the ground in November. Fortunately, nobody was harmed when the family farm — which is now a summer camp called Camp Hi Ho run by her brother Blaine — caught fire; he reportedly plans to rebuild and reopen by the summer of 2021. "I want to thank my Louisville community for reaching out to my family and me following the devastating fire that sadly destroyed a significant part of Camp Hi Ho," Lawrence said in an emotional statement released to People on Dec. 1.

"Thankfully, because of our amazing firefighters and first responders, no one was hurt and all of the animals were kept safe," the Oscar winner continued, before touching on her personal connection to the camp. "I grew up on that farm, going to Camp Hi Ho every summer. When my brother Blaine took it over, he applied his creative mind and fun loving spirit and expanded a camp that was already the coolest, because it was the only place where kids could do whatever they wanted."

Describing it as a "muddy, messy paradise," Lawrence then thanked Camp Hi Ho for "the amazing childhood memories" and explained that the family is working to support Blaine with the rebuild. "And we are so grateful for the widespread support from the community to get Camp Hi Ho back up and running so we can welcome kids back this summer."

Camp Hi Ho confirmed the fire in a Facebook post on Nov. 28, where they also thanked the first responders and firefighters for their hard work. "We are deeply thankful that no people or animals were hurt, but we are still mourning the loss of years of hard work and memories that occurred in these walls," the official statement read. "We know Camp Hi-Ho is a special place to so many, and we plan to rebuild and repair so that we can move forward with a safe and joyful camp experience this summer."

As for Lawrence, she'll be back in business soon, too.