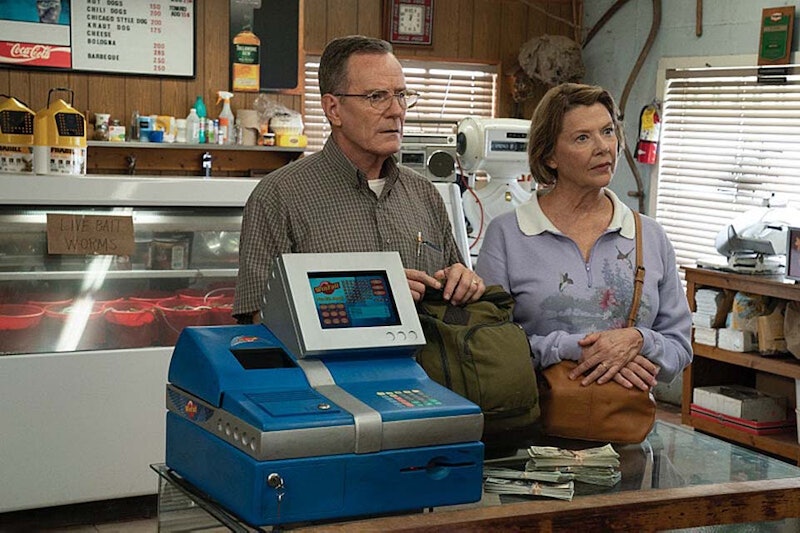 Inspired by the true story of Jerry and Marge Selbee, Paramount+’s Jerry & Marge Go Large centers on a retired small-town Michigan couple who won millions after discovering a — completely legal — mathematical lottery loophole. Prior to writing the screenplay, Brad Copeland met with the Selbees, their family, and friends in their hometown of Evart, Michigan, which has a total population of 1,900. Actors Bryan Cranston (Jerry) and Annette Bening (Marge) even spent a week with the real-life high school sweethearts, who will celebrate 65 years of marriage this fall.

The Selbees’ remarkable story gained national attention after The Huffington Post’s Jason Fagone published his 2018 “The Lottery Hackers” article, which served as the foundation for Copeland’s script. After retiring from his job at a Kellogg’s cereal factory and selling a convenience store that he later operated, Jerry discovered a new Michigan lottery game called “Winfall” in 2003. Unlike other games, this one didn’t have a progressive jackpot but rather had a “roll-down” feature, which paid out the prize money to lesser winners if nobody had a perfect ticket.

After quickly calculating the odds, Jerry, who holds a mathematics degree from Western Michigan University, figured out that he was guaranteed to win money if he bought enough tickets. So he tested his theory — and it worked. "It's just basic arithmetic," he told 60 Minutes correspondent Jon Wertheim in January 2019. Though he didn’t tell his wife about his lottery plans right away, she was immediately on board once he shared his discovery and that he’d already won five figures. They eventually set up a corporation called GS Investment Strategies LLC, keeping detailed records of their winnings and inviting a small circle of friends to join them.

Michigan shut down “Winfall” in May 2005, but Jerry soon found a game called “Cash WinFall” with similar rules in Massachusetts. So the Selbees developed a routine where they would drive approximately 700 miles and buy hundreds of thousands of tickets at two local convenience stores. They would spend up to 10 hours per day for 10 days at a time printing and sorting them. By 2009, they had grossed more than $20 million in winning tickets, a net profit of $5 million after expenses and taxes, per The Huffington Post.

The Selbees weren’t the only ones who had discovered the loophole, however, and they soon began competing against a group of Massachusetts Institute of Technology students, among others. The Massachusetts State Lottery was reportedly aware of anomalies in Cash WinFall ticket-buying. But after a July 2011 Boston Globe investigative report exposed the money-making scheme, including that anyone who could spend at least $100,000 on tickets on a roll-down week was statistically assured a profit, the state announced they would phase out Cash WinFall within a year. In the interim, they limited lottery retailers to $5,000 in ticket sales per day.

In January 2012, Jerry and Marge played Cash WinFall for the last time. Over the course of nine years, they, along with their “shareholders,” grossed nearly $27 million from both states, netting about $7.75 million in profit before taxes. Their goal was never to live a lavish lifestyle but instead put their money to practical uses, such as helping their six kids, 14 grandkids, and 10 great-grandchildren pay for their education. The Selbees, who saw the lottery as a post-retirement pastime, also created a loan company that gave opportunities for other people to improve their businesses or buy houses.

Humbly calling their nearly $27 million haul “satisfactory,” Jerry later told 60 Minutes that he didn’t see their story as being as remarkable as everyone else does, explaining, “The only thing I found really remarkable is nobody else really seemed to grasp it.”