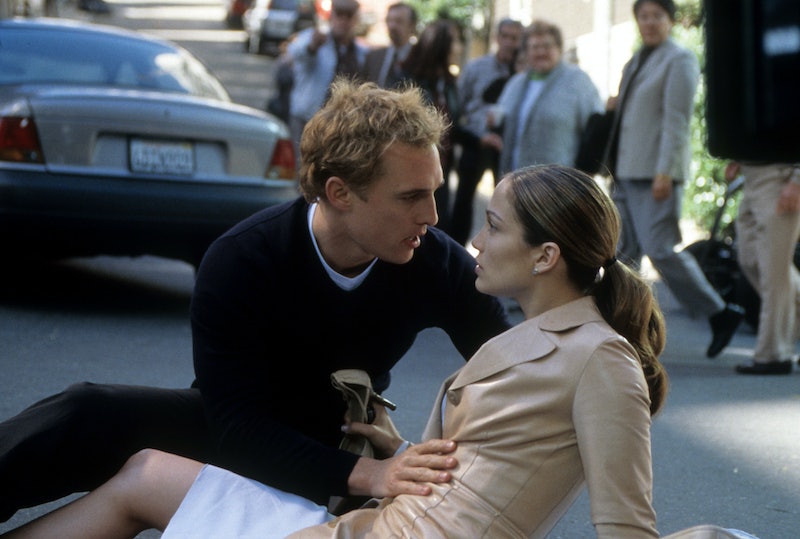 Mary and Steve are back together again. Jennifer Lopez and Matthew McConaughey reunited to celebrate The Wedding Planner's 20th anniversary on Tuesday, Jan. 26 (virtually, of course). And according to the stars themselves, it feels like no time has passed at all.

During the Instagram Live reunion, the stars shared nostalgic stories from the set, including what McConaughey told J.Lo right before their epic kiss. "It still feels a little bit like it was yesterday when we were in the middle of that field with the movie theater doing that scene where you were about to kiss me," she recalled. "You said, 'Miss Lopez, I'm going to kiss you now.' And I said, 'OK, let's do it. Let's hit it.'" Needless to say, it put them in the right mood.

McConaughey went on to praise his co-star's intense process to prepare for the role, saying that it made her an ideal scene partner. "As an actress, besides that you love to get in there and do the dirty work and hard work... you had things down," he remembered. "You love choreography in your [music] and acting as well. I love your deliberation and intentionality and preparation with stuff like that."

The iconic 2001 rom-com saw Lopez play Mary Fiore, who had to plan the wedding of a suave and charming doctor, Steve Edison (McConaughey) but ended up falling for him instead. It was a turning point for their careers, with both stars going on to star in many other beloved rom-coms. The movie even made history for Lopez, who became the first actor to have the number one film and album in the U.S. simultaneously, as her sophomore album J.Lo came out the same week.

But it almost didn't turn out that way. In an interview with People, director Adam Shankman revealed that Sony Pictures had other actors in mind for Mary and Steve, including Jennifer Love Hewitt and real-life married couple Sarah Michelle Gellar and Freddie Prinze Jr. In fact, J.Lo had to persuade Shankman to cast her in the role. "I was completely hypnotized by her," he recalled. "She was ambitious and understood everything that was girly and feminine about the movie, but at the same time recognized the engine inside of it."

Of course, Lopez and McConaughey ended up making one of the defining romantic comedies of the early aughts, and they were very grateful for the experience. "I so enjoyed working with you," she told him. "We had such a nice rapport and chemistry. We were somewhat at the beginning of our careers at that time. It was exciting to be working on any movie. I still feel that way."

The former co-stars ended the reunion by promising to work together again, with J.Lo mentioning that she wanted to cast McConaughey in her upcoming film, Shotgun Wedding (the one Armie Hammer just dropped out of). "We're gonna do something again, baby," she told him. "Because we have to do something. Twenty years is too long."

More like this
12 Years Ago, Austin Butler Manifested His Oscar Nom In This Disney Movie Scene
By Jake Viswanath
Sandra Bullock’s Razzies Speech Proves She’s The Ultimate Miss Congeniality
By Sam Ramsden
Anne Hathaway Shared A "Thrilling" 'Princess Diaries 3' Update
By Darshita Goyal
'Abbott Elementary' Fans Probably Missed This 'Parent Trap' Easter Egg
By Sam Ramsden
Get Even More From Bustle — Sign Up For The Newsletter
From hair trends to relationship advice, our daily newsletter has everything you need to sound like a person who’s on TikTok, even if you aren’t.