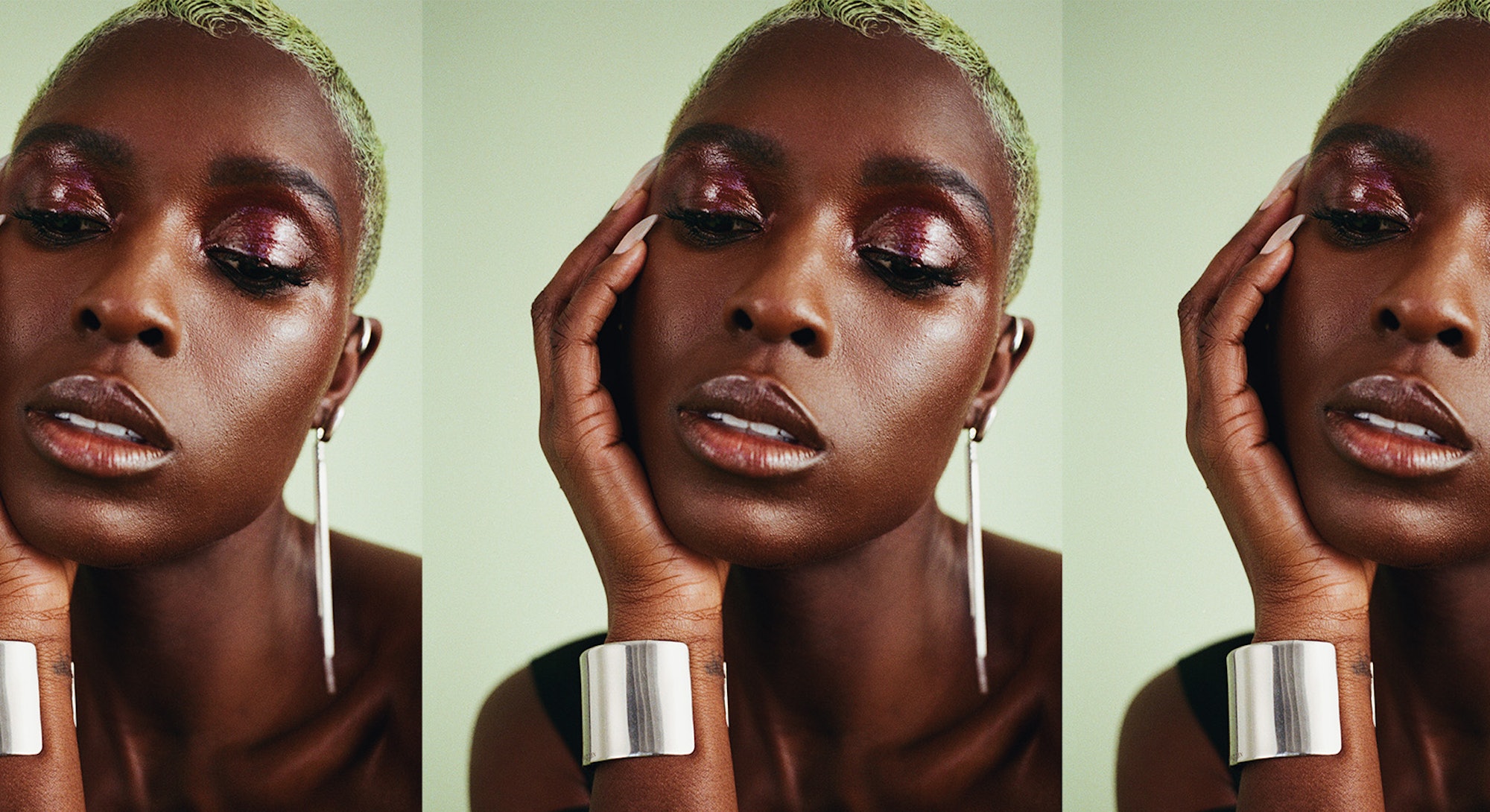 Jodie Turner-Smith has sent her husband and their daughter out for a walk. Same here, actually. She is Zooming from London, and I am in New York. It’s a Saturday, and the moms are working while the dads perform child care out of earshot.

Turner-Smith’s husband comes home first. He has gotten their 2.5-year-old McDonald’s. “Dads and what they feed the kids,” she says. Later, there is noise in the next room, and she mutes her microphone to speak to him. When she turns it back on, she explains: diaper situation. We commiserate a little about working parenthood. “It’s an ongoing journey,” she says, “Right?”

It’s all so relatable that you can easily forget that Turner-Smith is a glamorous actor about to host the British Fashion Awards, and her husband is Joshua Jackson, most famous for playing Pacey on Dawson’s Creek. The kind of couple so enchanting J.Crew picked them to sell you holiday pajamas.

Normally, they live in Topanga, on the outskirts of LA, in Jackson’s secluded childhood home, surrounded by nature. One of the perks, Turner-Smith tells me, is that paparazzi don’t venture up there. “The thing is I'm not actually that famous,” she says, “But people have looked at certain elements of my life, and those elements of my life have become subjects of tabloid and gossip.”

Turner-Smith broke out in 2019’s Queen & Slim, at which point Jackson had been a celebrity for most of his life. Even before her career caught fire, she was in US Weekly for holding his hand. “When I came onto the scene I was secretly married and I was secretly pregnant,” she says. “And that was a story for people. I think a lot of it was because I was married to a white person. And I was married to a white person who has been in the public eye for decades and you know, has been someone that the tabloids like to talk about.” The couple had moved to West Hollywood so she would be less isolated, but the result was that she became the subject of paparazzi photos, Daily Mail comments, and hateful Instagram messages for the first time while pregnant. “I mean, it was like literally the most vulnerable time.”

“I don't want to sit here and be like a celebrity who's complaining about the very ecosystem that keeps me wealthy,” she says. “But the reality is that there is an underbelly that it's very hard to deal with.” As recently as September, Page Six ran an article headlined “Joshua Jackson, Jodie Turner-Smith don’t follow each other on Instagram.” (They do now.)

The simulated intimacy of the internet emboldens people to weigh in, often with a degree of creepiness, on the personal lives of celebrities. Turner-Smith accepts this, if uneasily. “I think when you create characters that people love, and you make art that people love, then it belongs to everybody. And then people sort of interpret that as you belong to everybody, and in a way, part of you kind of does, but you're also a human being. You don't belong to anybody else.”

For the purposes of self-preservation, she has deactivated Twitter and disabled Instagram DMs from strangers. But most of her concern is for her daughter. “I think the bottom line is, I accept the thorns that come with the rose. I accept them for me. I don't accept them for my daughter.”

As Turner-Smith’s career progresses, she and Jackson increasingly face similar, overlapping demands to be away from each other and their daughter. “Historically, women have always been asked to choose between being great mothers and great at their careers,” she says. But, “Josh has always tried to maintain that I would always have all the support that I needed so that I could do both.” Turner-Smith’s mother lives with the family, and they usually have a nanny. “Right now my daughter still comes with me most of the time, except when I go on trips that are under a week. That has been working for us so far. Obviously it's challenging because I don't want to create a space in which my husband can't see her when he's working.” She likens the challenge to trying to create a new reality.

Turner-Smith was born in Peterborough, England, to Jamaican parents, but moved to the U.S. when she was 10. They lived in Gaithersburg, Maryland, and she later attended the University of Pittsburgh and then briefly worked at a bank before changing career trajectories in favor of modeling. This, improbably, was at the suggestion of Pharrell Williams, whom she met backstage at an N.E.R.D. show in 2009.

Before the fateful Pharrell encounter, she wanted to be a writer. I asked Turner-Smith if she still writes or if acting scratches the same creative itch. “When I used to write a lot, I had a different life,” she says. “I would always say that what I was doing was turning the mundane into something magical. Then life got really, really full and most of the time, I was just trying to hold on to the wall or my seat to deal with all the change.” She says, “As I've gotten deeper into my acting career, I've sort of come back to it,” especially now that she has started producing and directing.

She is still a reader, a habit that began with Jane Austen and Emily Brontë in childhood, and progressed to Toni Morrison, Anaïs Nin, James Baldwin, and Marlon James. It tracks: If there is a throughline to Turner-Smith’s recent work — from disillusioned lawyer in Queen & Slim to ambitious cub reporter in The Independent, which came out on Peacock in November — it might be that the characters she plays are extraordinarily smart.

The girl-genius trope is taken to its comic limit in White Noise, director Noah Baumbach’s adaptation of the postmodern classic by Don DeLillo. Turner-Smith plays Winnie Richards, a young neurochemist, whose work, per DeLillo’s novel, is “said to be brilliant” by her colleagues. It is the 1980s at a fictional university called College-on-the-Hill and her purpose is to investigate a mystery drug at the behest of Professor J.A.K. Gladney (Adam Driver), who has discovered his wife is using it.

Turner-Smith was not familiar with the novel when she auditioned, but Jackson was. “He was like, ‘Oh, this is a very cool book,’” she says. That, plus Noah Baumbach, were enough to get her interested.

In our conversation, Turner-Smith says that Baumbach was having fun with the stereotype: Winnie wears giant glasses that cannot dim her obvious beauty. In ‘80s movies, she says, “there's that nerdy girl and she's got glasses and when she takes her glasses off, it's always a transformation.” She adds, “It was really funny because though it was like we're just gonna, like, put some glasses on you.”

Turner-Smith’s version of Winnie is different than the one in the novel — she has a charm, a sparkle, that doesn’t exist on the page. DeLillo’s Winnie is a “tall gawky furtive woman,” and Turner-Smith’s character is nothing like this. Her Winnie is kooky and delightful; she drinks chocolate milk and loves junk food. Noah Baumbach tells me, “The part of Winnie in the movie is inspired by the novel, but when I was auditioning people I was open to whatever each actor brought to the reading. Jodie played it with such seriousness and assuredness. She really helped shape and defined the character for me.” He adds, “She was also very funny.”

Greta Gerwig, who also stars in the movie, seconded this: “The day she did her long scene with Adam in the lab, I came by to watch and was immediately taken with what a deft physical comedienne she is, while simultaneously dealing with the incredible (but dense) Baumbach/DeLillo dialogue. She just carried it all so lightly & effortlessly.” Characterizing Turner-Smith as a person, Gerwig says, “Joy, pure joy. She lives and acts to her fingertips, which is the most joyful thing I can think of.”

A few weeks before our Zoom, I glimpsed Jodie Turner-Smith at Lincoln Center, at a distance of several hundred feet, at the premiere of White Noise. She was on stage, hugging Baumbach and laughing at how hard it was to move in her gown. Her gown, by Alfredo Martinez, was a stunner: black sequins, with two big cutouts at the waist, and a bow at the back of her neck that spanned the width of her shoulders. But it wasn’t just the dress (the most dramatic one on stage) or her hair (buzzed and dyed reddish purple) that made you want to look at her. She has the sort of off-the-charts actorly charisma that makes it impossible not to.

Turner-Smith’s role in White Noise is small. Winnie Richards is only in the movie for a couple of short scenes. The role seems her least political to date, though she said in an interview with AnOther that “as a dark-skinned Black woman, my body is politicized. Everything I do is political.” With this in mind, the cheery, decontextualized presentation of race in White Noise — which finds Don Cheadle, André Benjamin, and Jodie Turner-Smith playing high-ranking professors who are chummy with the world’s foremost scholar of Hitler studies — begins to seem more complex.

But luckily, smart and fun are not mutually exclusive in movies. And in their scenes at College-on-the-Hill, she and Adam Driver seem to be having a lot of fun. The crowd at Alice Tully Hall eats all of it up. “This is Noah Baumbach’s film festival,” said the festival director in his introduction of the film. Perhaps. But the moment belonged to Turner-Smith. And every moment she was onscreen belongs to her as well.

There is no plot reason to have included more Winnie, and yet as the film ended, I could not have been the only one with the criticism: more Winnie. With her flurry of recent roles (see A24’s After Yang) and more coming — a Star Wars series, an Adam Sandler comedy — this seems to be where the entertainment industry has landed as well. More Winnie. More Jodie.