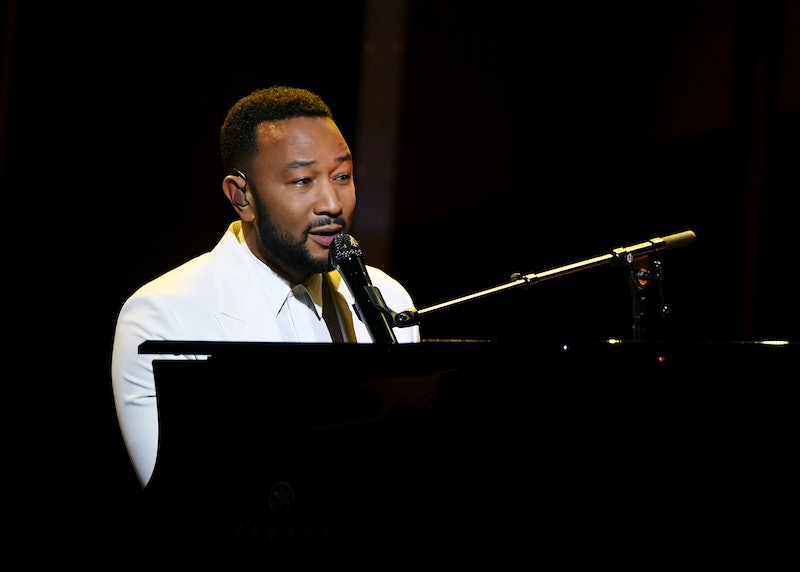 A king is back on his throne. John Legend celebrated Valentine’s Day with a ’90s-inspired infomercial on Saturday, Feb. 13. The “totally real, not at all staged” ad encourages viewers to “imagine what it would feel like to own the greatest love songs of all time on a once-in-a-lifetime compilation.” The six CDs feature “36 breathtaking songs,” all by the same “dreamy artist”: Legend himself, of course. Together, they make up the aptly titled Legendary Love Songs Collection.

For anyone who remembers ’90s infomercials, Legend’s video really does capture the ads of the time. Though there’s contemporary footage of the acclaimed singer and his wife, Chrissy Teigen, and his music serves as the soundtrack, the script (aside from some obvious jokes) and graphics are a pure throwback. Even the compilation’s price — “the low price of $29.95” (plus shipping and handling) — is spot on.

Overall, it’s an A-plus effort from the self-proclaimed “king of Valentine’s Day.” His team even took the time to build a very ’90s website advertising the collection, so it’s almost a shame the infomercial is just a parody celebrating his big holiday; there could be a market for this compilation in real life, especially with its “insultingly low” price.

Legend’s latest effort to prove he’s the king of Valentine’s Day comes after last year’s celebration, which included a spoof of a 2019 Mariah Carey Christmas video. It showed him going to bed on Jan. 31, and then waking up to a call from Cupid on Feb. 1 in red pajamas, surrounded by red, pink, and white bedding, and covered in rose petals. “It’s time!” he sang before his song “Conversations in the Dark” began. He also guest hosted The Ellen DeGeneres Show on Feb. 14, 2020 and took the chance to surprise Starbucks customers alongside violinist Lindsey Stirling; there, he serenaded customers with versions of his songs inspired by the coffee chain. Closer to home, he made heart-shaped pancakes for Teigen.

This year, Legend’s infomercial isn’t all he came up with. On Feb. 12, he held a pre-Valentine’s Day serenade on Instagram Live and shared an “All of Me” video for fans to share with their loved ones. Though Teigen got to enjoy his performance live, she wanted people to know that he had not gotten her a beautiful bouquet that she was recently photographed with. Sharing a screenshot of a Daily Mail article via her Instagram story that claimed her singer husband had bought the flowers for her, she wrote, “I got them for myself thank u.”

There’s still time for the king to reveal any other tricks he might have up his sleeve this Valentine’s Day.

More like this
Hilary Duff's Husband Matthew Koma Has Her Name Tattooed On His Butt
By Jake Viswanath and Stephanie Downs
Olivia Rodrigo Manifested Finally Meeting Demi Lovato
By Jake Viswanath
Taylor Lautner Thought Taylor Swift's 2009 VMAs Interruption Was A "Skit"
By Alyssa Lapid
The Jonas Brothers' New Album Has A Very Meta Name
By Alyssa Lapid
Get Even More From Bustle — Sign Up For The Newsletter
From hair trends to relationship advice, our daily newsletter has everything you need to sound like a person who’s on TikTok, even if you aren’t.