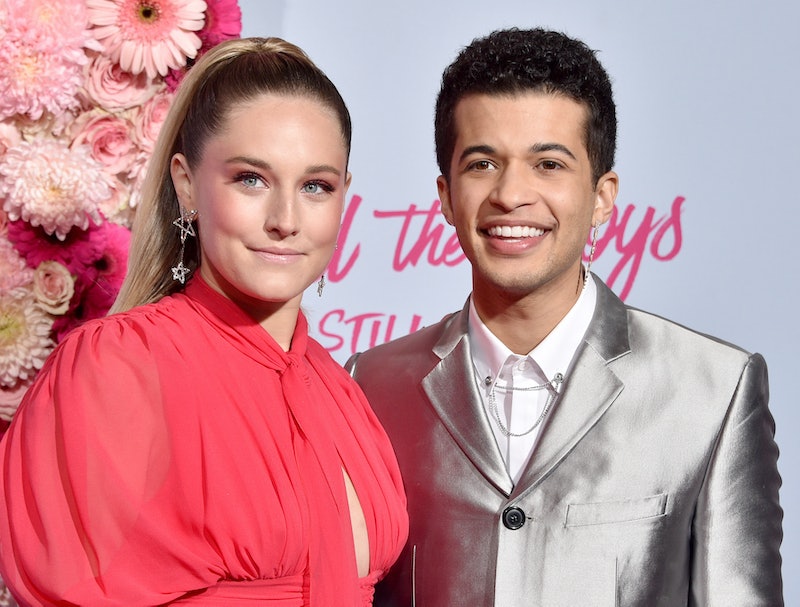 Dancing With The Stars prodigy Jordan Fisher brought all of his moves to the To All The Boys I've Loved sequel, P.S. I Still Love You. In it he plays John Ambrose, a middle school classmate of Lara Jean's (Lana Condor) and recipient of one of her love letters — who, it turns out, reciprocated her feelings back then and might just still. Now Fisher is back on Netflix in the dance movie Work It, where he teaches a hopeless high-schooler named Quinn (Sabrina Carpenter) how to dance and sparks fly in the process. But with all of the tugging romances and mixed feelings in both movies, it might help to set one thing straight — Jordan Fisher is off the market.

Fisher is engaged to one of his childhood best friends, vlogger Ellie Woods. On January 13, 2019, Woods posted a video of Fisher to her Instagram celebrating the couple's second anniversary. "2 years of being with my best friend and I couldn’t be more in love or more grateful. Wanna go round 3, @jordan_fisher?"

But before they started going steady, the two were friends for a long time. As Fisher told J-14, "We grew up in a theatre company together in Birmingham. We were just friends. It took us a long time for all of a sudden, like a year and a half ago we were kind of like 'Let’s see what this could be.'" Appearing in the Broadway show Hamilton at the time, Fisher invited Woods to New York to go on a few dates and cautiously figure out whether things would work between them. "So, she came to New York, I took her on some dates, and that was it!" The two have been together ever since.

In May 2019, Fisher shared a video of his proposal to Woods on Instagram. As Fisher and Woods told People, he chose to pop the question "at Woods' parents' beach house in Birmingham...Surrounded by peonies, lilies, and seashells that Fisher had set up, he got down on one knee. 'I'm an emotional person, so I was sobbing as well,' says Fisher of the tearful moment." Fisher added that the wedding was planned for July 2020 in Hawaii, but due to the pandemic, they've postponed their "ding day," as Fisher called it on his Instagram, until November.

Work It and To All The Boys 2 are both streaming now on Netflix, so you can get your fill of Fisher on the streaming site.

More like this
Selena Gomez Confirms She's Single Amid Drew Taggart Dating Rumors
By Martha Sorren, Jake Viswanath and Jack Irvin
Joey Essex Is Rumoured To Be Dating A 'Love Island' Favourite
By Sam Ramsden
Michael B. Jordan Tackled His "Public Breakup" With Lori Harvey On 'SNL'
By Brad Witter
Who Is Pete Davidson Dating? He & Chase Sui Wonders Got Caught Kissing
By Jake Viswanath
Get Even More From Bustle — Sign Up For The Newsletter
From hair trends to relationship advice, our daily newsletter has everything you need to sound like a person who’s on TikTok, even if you aren’t.

This article was originally published on Feb. 12, 2020