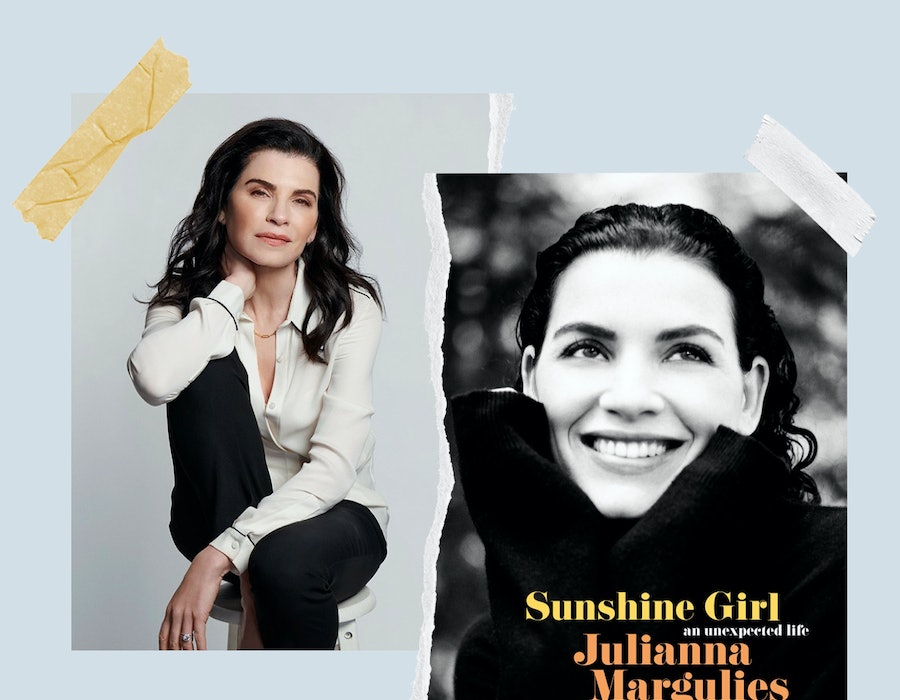 Yu Tsai/Courtesy of Penguin Random House
By Lily Herman
May 7, 2021

From the first line of Julianna Margulies’ book, you know you’re in for a ride. She opens with a blunt admission — that her parents’ marriage was over before she was born — and then proceeds to reminisce about the day she came home to learn of her middle-aged mother’s 21-year-old boyfriend, and that time a young George Clooney gave her life-altering advice on the set of ER. But the ER and The Good Wife actor didn’t write a memoir to sugarcoat the truth.

Margulies had been ruminating on when to tell her story ever since The Good Wife ended its run in 2016. After quarantine brought on some particularly deep soul-searching, she decided the time was right. “In a strange way, as horrific and horrible as [the pandemic] has been, I hear a lot of people talking about [how] they're finally taking the time to reflect on who they are and how they live their life,” she tells Bustle. The result is Sunshine Girl: An Unexpected Life, which is in stores now.

Margulies really does put it all out there in her book, writing about ping-ponging between continents on the whims of her self-absorbed parents, cheating on a longtime partner with a broody and emotionally bankrupt actor, and fielding interview questions about balancing motherhood with her career while her Good Wife co-star and fellow parent Chris Noth was asked about his acting technique.

Below, Margulies talks about her fated meeting with her husband, airing her mother’s (very) dirty laundry, and the advice she’d give her younger self.

What made you decide that now was the time to write a memoir?

I think I've just spent so much of my life working, and I think it was finally when I had the time to reflect that I realized I had a story to tell, and that I felt like my childhood was so extraordinary in many ways and so different from what a conventional childhood would be. But I wanted to share my story with people to show them we don't need to cling on to that which cripples us [to move] forward.

The book had so many iterations. Originally it was called A Left Instead of a Right, because I always felt like I was going in the back door and finding my way rather than going in the front door.

I quote my grandfather in [the book], where he said, "You never know if you make a left instead of a right. You don't know how your day is going to be." And I ruminated on that, because I thought, isn't that how we all live? If you hear people talk about when they have car accidents, [they say], "God, if I had just taken a left instead of a right, I wouldn't have gotten hit by the car." ... And then you find out that actually having that accident allowed you to meet the person you're going to marry or whatever it is, all those circumstances lead up to who you are in that moment.

It's like how you talked about meeting your husband in a chance encounter — like, “If all those little things hadn't all happened, we would not have met.”

It's universal. I mean, it's if Trump hadn't had a TV show, we wouldn't have had the nightmare of the last four years. It's everything, it's all those things that add up to, "What is this present moment?" And then how do we handle ourselves within that present moment? What have we learned from those lessons? And do we take them seriously enough to choose to do the hard work, to live our fullest life?

With memoirs, you always have to talk about other people — and in yours, you show the slow realization you had that your parents are flawed people. Did you have conversations to let everyone know about being in the book?

Well, because the book really is so much about my mother, I called her and said, "I have been writing. I submitted nine chapters and my agent thinks that could be a really good book. Do I have your permission to write about our life?" Because so many of the chapters made too many people come off terribly, right? And I needed her blessing and her participation in order to be as truthful as I could about who she is and who she was to me and what her role in my childhood was. And I mean, God bless her. My mother is many things, but she is constantly working on herself at 85. My mother still every morning reads Thich Nhat Hanh, every morning meditates, every morning decides, "Okay, where were my flaws? How could I have done better?"

And so I am blessed with a woman who, despite all her flaws, has, I think, really come out the other end as a truly almost enlightened being in that sense, in that she takes responsibility. And she says it to me all the time, "I wish I had done it differently. I can't believe I wasted any time with a stupid 21-year-old when I could have been spending time with you." She says it every day. And so it was a real bridge for her and [me].

There [are] some things she doesn't remember — she's 85, got to give her a break — but after every one of these conversations, she never said, "Oh, sweetheart, please don't go there." Or, "Oh, God, you're going to write about that?!" She actually, I think, found it liberating, because, as one of the PR people at Random House who read it said, "God, sometimes it's so frustrating. You just hate your mother. And then at the end of the chapter, you love her. How can that be?" So that was the fine sort of line that I wanted to convey. Yes, this woman was very selfish and very self-centered and all of those things, but at the end of the day, she cops to it. And I think it's all about forgiveness and moving forward.

What's the one piece of advice that you would give your younger self?

I would tell myself to relax. I think I was so wound up in trying to control myself and parent myself and be the best at everything. And I would just want to stroke her head and say, "Honey, it's all going to be okay. Take a breath and enjoy your life."