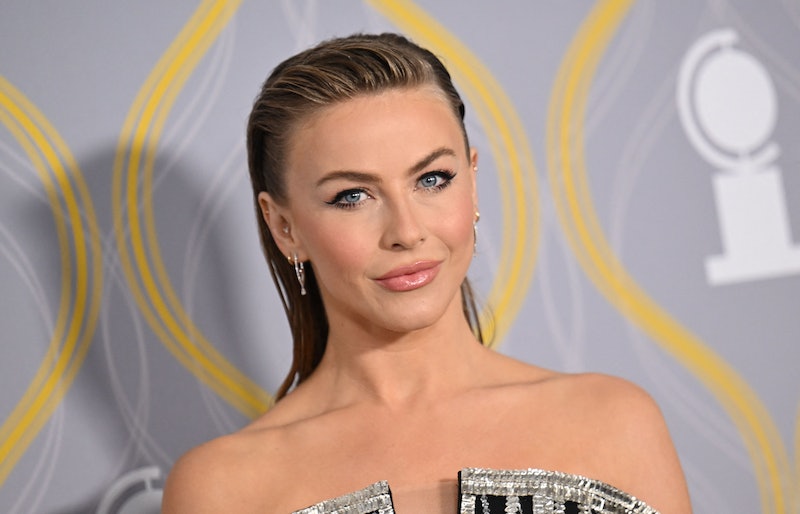 Eight times a week while performing in the Broadway play POTUS: Or, Behind Every Great Dumbass Are Seven Women Trying to Keep Him Alive, Julianne Hough delivers a line about how “affordable, safe reproductive healthcare is a basic human right.”

That line has been part of the show — a wildly funny political farce about a group of women struggling to contain a presidential PR crisis — from the beginning, but it has taken on new and deeper resonance since the Supreme Court overturned Roe v. Wade late last month.

Footage captured inside the Shubert Theater during the performance on June 25, just hours after the decision, showed the overwhelming applause that followed Hough’s line — a prolonged reaction that literally stopped the show. The same thing happened when I attended the matinee the following afternoon, and when I spoke to Julianne Hough a few days later for Bustle’s Health and Wellness issue, she said it was still happening.

“It was an interesting feeling, and [the cast] talked about it a lot,” Hough recalled. “It feels so strange to go into work and entertain people when this is not OK. And yet, it's the only place that I think all of us would've wanted to be.”

The actor said the experience of delivering that line and hearing the audience’s response was cathartic. (On Instagram that night, she wrote, “It felt like we had done group therapy with the entire audience.”) “It wasn’t a [moment of] ‘Let us perform for you.’ It was, ‘We’re in this together.’” And the entire cast, a group of seven women that also includes Vanessa Williams, Rachel Dratch, and Lea DeLaria, felt the weight of it.

“We were all weeping on stage,” Hough remembered. “Julie [White] grabbed my hand. I was crying. Lea was crying. Julie, Susie [Nakamura], we were all there. Unfortunately, Lilli [Cooper’s character] is in the closet, so you can't see her. And then Rachel and Vanessa's characters are on the floor, so you couldn't really see them either. But I didn't even know I was crying. It was just tears running down our faces.”

Hough, who plays Dusty — a young woman having an affair with the president — says her delivery of the line has changed, too. “In the past, I used to say it just matter-of-fact, and there was no charge behind it. And now there’s a little bit of Julianne popping through for sure, and other women [too]. It needs to hit a different way.” She continued, “Being up on stage, holding that space, I don't take it as pressure because then that's scary. But I take it as a true responsibility and honor to be able to have that be one of the most impactful lines, maybe, that I'll ever say in my career.”

For Hough, it’s also a reminder of how art can channel powerful feelings about the world around us. “It’s a heavy world that we’re living in right now, and being able to connect to your fellow actors or the audience in a way that brings levity, even though it’s not pushing [away that heaviness], it allows you to have more space for hope,” she says. “It’s life-giving, so that it can help you continue your fight.”

More like this
Angourie Rice Unleashes Her Inner Control Freak
By Jessica Derschowitz
Christina Perri Had No Idea Her 'Twilight' Song Is On YouTube's Top 100 Chart
By Radhika Menon
At 28, Tisha Campbell Was Newly Married & Dancing Through A Career Pivot
By Grace Wehniainen
At 14, D'Arcy Carden Was Sneaking Out To Parties & Crying Over Kurt Cobain
By Ivana Rihter
Get Even More From Bustle — Sign Up For The Newsletter