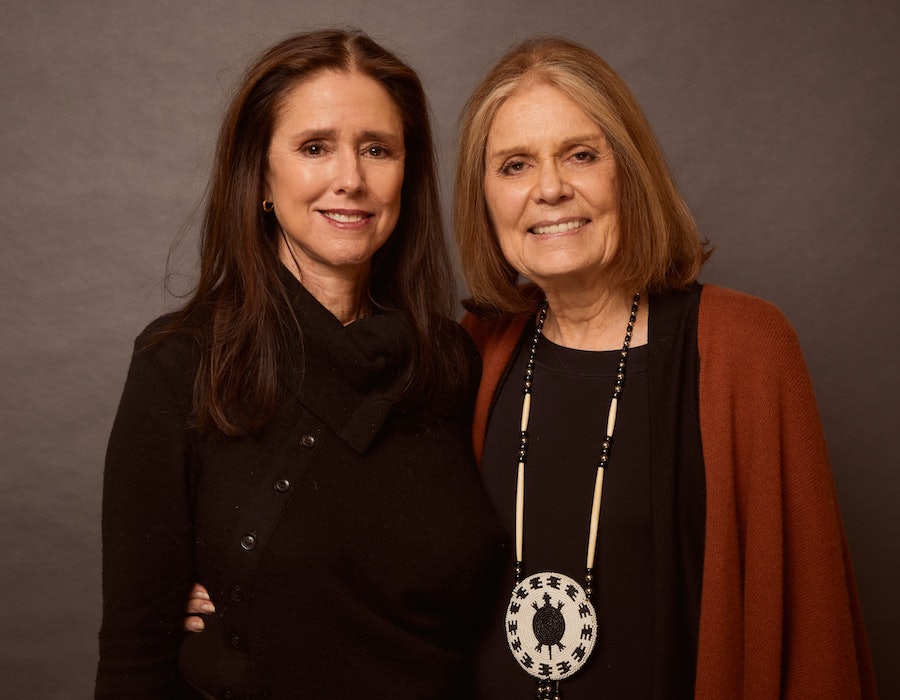 Julie Taymor is steadfast in her vision. The director known for her elaborate, over-the-top productions in movies like Across the Universe and Frida and the theatrical adaptation of The Lion King has been nominated for an Oscar and became the first woman to win the Tony for Best Director of a Musical (The Lion King also has the distinction of being the highest-grossing piece of entertainment ever.) Yet despite her successes, Taymor has still had to battle Hollywood for full creative control over her works. “I put blinders on and I just keep going,” Taymor tells Bustle. “I'm not going to let it stop me, but it does slow me down.”

Nearly all of Taymor’s projects have been an uphill battle to release. She waged war with Harvey Weinstein over the final cut of Frida, took on Sony when they suggested she make changes to the cult classic Across the Universe, and was ultimately ousted as director of the highly controversial Broadway play Spider-Man: Turn Off the Dark after a series of creative differences. After a decade hiatus from making movies — excluding a filmed version of her theatrical take on A Midsummer Night's Dream — Taymor is back with The Glorias. Based on Gloria Steinem’s memoir My Life on the Road, The Glorias is ambitious, charting 80 years of Steinem’s life with four different actors (Julianne Moore, Alicia Vikander, Lulu Wilson, and Ryan Kira Armstrong) playing the feminist icon. When pitching it, her vision for the project and its scope was challenged — but this this time, she wasn't willing to play ball.

“With The Glorias I made the movie I wanted to make. I had final cut,” Taymor says of working with a non-Hollywood financier to produce the 2 hour and 19 minute film fully on her terms. “I know everybody would like it to be shorter, but it's not the length of a Tarantino [or] Scorsese [film], so enough already. You think it's worth having three hours of violence in these male movies where we've seen that story before, [but not] in a movie that's about a woman and a movement that no one's ever really seen? Come on.”

Below, Taymor reflects on getting The Glorias made, fighting with Harvey Weinstein, and turning down The Handmaid's Tale.

Your path to filming The Glorias was fairly unorthodox in terms of how movies are typically made. What was that process like?

I went to Hollywood to try to raise money for this epic film — which covers India, many cities throughout the United States, and 80 years of a person’s life — so that’s not [going to be] cheap. But I kept getting this kind of reaction: “Oh, we’ll do it for so-and-so amount of money.” [The amount was] enough for a dysfunctional family drama where everything’s shot in a house in Wyoming. Without saying it directly, [I] got the feeling that they thought of [The Glorias] as a chick flick, or a film that would only appeal to women.

I couldn’t raise the money in Hollywood, but we raised the money through an [anonymous] nonprofit organization, which is unheard of. I said to them, “How many times have we seen stories on LBJ or Winston Churchill? Here we have a living female hero and I can't do it for less than a certain amount of money." So I stuck to my guns, and we did it.

Your theatrical adaptation of The Lion King has grossed over $8 billion. Why doesn’t that carry more weight when you go into a financing meeting?

It's inexplicable to me. I think it's partly because my movies, like Across the Universe, right off the bat didn’t make enough money. Frida did. But we didn’t have people backing it [from a publicity standpoint] because they didn’t realize that [Frida] would have such a popular reach. There’s a blind spot with films where the lead characters are women and there’s no sex in it. [The Glorias] is a love story between women, not a sexual one, but one where they’re supportive of each other. It’s about the women [Gloria] loved and worked with and was on the road with. Young girls need to see that.

One of the biggest battles you’ve waged in your career was against Harvey Weinstein over the final edit of Frida.

He wanted more sex and he wanted to see sex acts with women. That's how he treated Salma [Hayek]. He just saw her as a sexy Latina and wanted to have sex scenes with her. [When it came to editing] Harvey called me up and shut the movie down for seven months. Harvey Scissorhands, as they used to say. But I wouldn’t budge on [my cut]. So my editor said, "Julie, come back to New York. We will frame f*ck."

Frame f*cking is when you take frames out and it pushes everything a teeny bit faster. But [in reality] we only cut two minutes out of the movie. Harvey came into the editing room, and [my editor] said to Harvey, "Julie and I have discussed this and I've convinced her. We've made 32 cuts." So that he could feel like he had some power and sway over me, and he made the movie better. He saw them, and he knew deep down that it was just two minutes.

"There’s a blind spot with films where the lead characters are women and there’s no sex in it."

This was 18 years ago, at the height of Weinstein’s power. How did you have the courage to combat him?

I had a relationship with Harvey where I was able to make him like me. He loved battling Quentin [Tarantino]. He loves battling men. He couldn't stand women who come up strong against him. So I didn't. It was through certain kinds of cajoling and joking [that I challenged him]. We got along okay until the very end. Until I dug in my heels and said, "No. I'm not cutting anymore. And I'm not going to make a movie that's a lie. I'm not going to have these things."

What’s been the hardest battle you fought during your career?

Spider-Man was definitely the hardest, and I lost.

How did that make you feel?

What it taught me is that you really, really have to know who you're getting into bed with. What happened on Spider-Man is people choked. They were all newbies, including Bono and the Edge. We went through three sets of producers. So at a certain point, they lost their nerve.

We had sharks just wanting to attack [the play] from the beginning, before there was a script. They were out to get me because I had a successful show and [out] to get Bono and the Edge because they were trying to do Broadway. We started this in 2001, right after the World Trade Center [terrorist attack]. I had a vision and the original people [involved] loved it. But by the time the [play was coming out], 10 years had gone by and there was a lot of fear. They wanted to just put out something safe, and when you do that, you fail.

Have there ever been times where Hollywood has come to you with a big project that you’ve turned down?

The Girl on the Train. Just not my thing and Emily Blunt wasn't attached at the time. The Handmaid's Tale, which I regret not taking. I was the first person asked to direct it, and I wanted to choose my own actor. And when I saw it, I thought, “My God, Elisabeth Moss was fantastic.” But I didn't know it at the time, so I turned it down.

Who did you envision for Offred?

I'm not going to say that. I totally made a mistake. But on the other hand, I think [Reed Morano] did a genius job. There've been other big projects, too. Right after Lion King, I got offered The Cat in the Hat with [Steven] Spielberg's company. I wasn't interested in doing the family children's thing after Lion King. I went off and did Titus with Anthony Hopkins instead.

What made you want to invest your time in Gloria Steinem’s story?

I couldn’t get [My Life on the Road] out of my mind. It takes you all over the world on her journeys as an activist, a speaker, and just someone riding the trains when she was 20 in India. I traveled on third class trains when I was 21 and what I identify with with Gloria is that she's very comfortable in an uncomfortable zone. She's really out there crossing boundaries, cultural boundaries, racial boundaries, all things that people think a nice, safe girl wouldn't do. And I just thought, “Oh, I've got to tell the story. I'll find a way.”