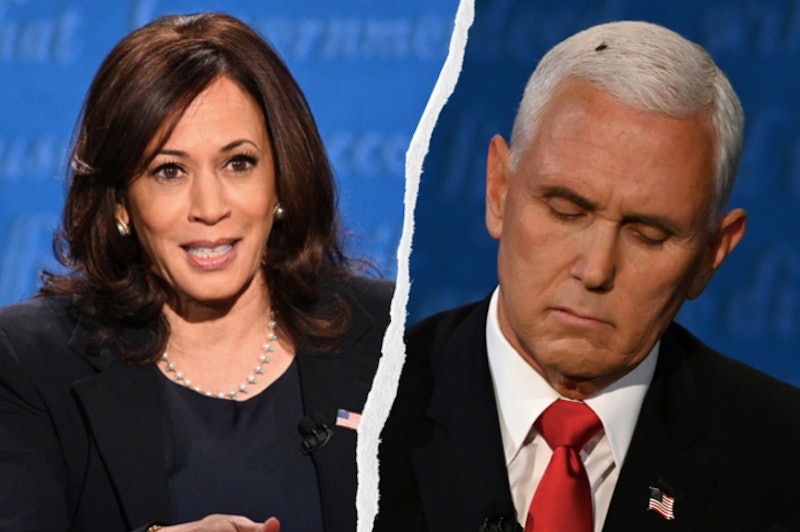 There was a huge elephant in the room at the 2020 Vice Presidential Debate on Oct. 7 — and it wasn't any of the Republicans. It was, of course, the fly on Mike Pence's head that went completely unacknowledged by everyone in the room, but definitely won the debate on Twitter. Now a week later, Kamala Harris has finally commented on the fly, and yes, just like all of us, she did see it during the debate.

At the tail-end of an interview with on The Rachel Maddow Show on Oct. 14, host Rachel Maddow asked Harris the question we've all been dying to know the answer to: did she notice the fly on Pence's head in real time? Harris almost seemed like she was going to dodge the question before she started giggling and simply nodded her head yes, slowly losing the ability to contain her laughter. When Maddow pressed on and asked if she had the instinct to swat the fly away, she gave a very dignified yet hilarious response. "You know, Rachel, I think that it's important that we find a way to move on," she said, still laughing, "and kind of fly away from this subject onto something else." Even while trying to stay composed, Harris couldn't resist making a cheesy pun.

Although Harris wants voters "to fly away" from the topic and move onto more important matters, the fly has made its mark on pop culture and it doesn't look like it'll be fading from the Twitterverse anytime soon. As per usual, the internet made endless memes and even created multiple Twitter and Instagram accounts for the fly. Immediately after the debate, Harris and Joe Biden's team started selling fly swatters as official presidential campaign merch. And if Steve Martin's recent joke is any indication, the fly just might be one of the most popular Halloween costumes this year.

Pence was also asked about the fly earlier this week, and despite it landing firmly on his head, he said he didn't notice his new friend at all. Instead, Pence learned about the fly through his children. “They’re the ones that told me, I didn’t know he was there,” he told Fox News in an interview on Oct. 12, adding that the incident "was a good laugh for all of us."

More like this
Pamela Anderson Is Still A Hopeless Romantic
By Ilana Kaplan
Jessica Simpson On The Time She Was Pursued By A Backstreet Boy & An *NSYNC Member
By The Editors
At 28, Rosie Perez Risked Her Career To Stop Playing Stereotypes
By Gabrielle Bondi
Matt Hancock’s TikTok Is The Most Matt Hancock Thing Ever
By Sam Ramsden
Get Even More From Bustle — Sign Up For The Newsletter
From hair trends to relationship advice, our daily newsletter has everything you need to sound like a person who’s on TikTok, even if you aren’t.