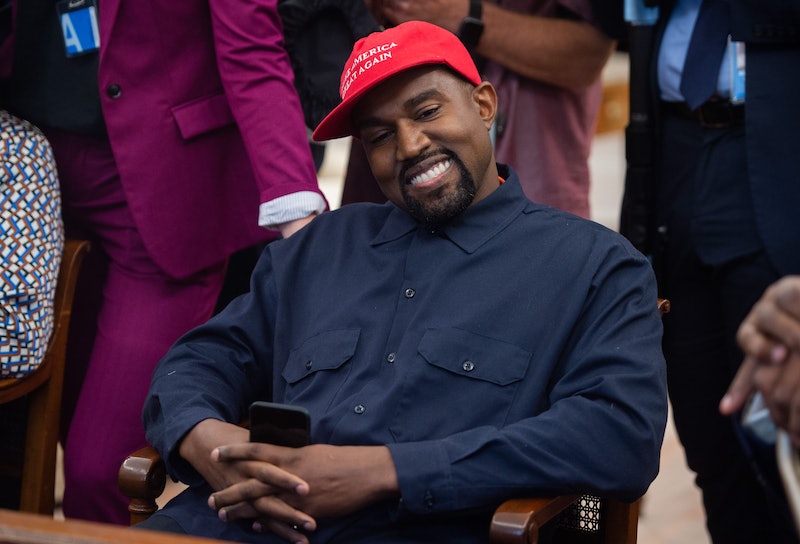 In case you vacationed under a rock over Fourth of July (and who can blame you if you were?), Kanye West has officially decided to run for president in 2020. But the platform that he might be running on could be a major cause of concern. Kanye West revealed his anti-Planned Parenthood conspiracy theory in a revealing interview with Forbes, published on Wednesday, July 8, and it's... utterly false, to say the least.

During the in-depth interview, which touched on religion, foreign policy, and, yes, Donald Trump, West explained that he was against abortion, a stance that would ultimately be apart of his presidential platform. “I am pro-life because I’m following the word of the bible," he said. He went on to speak about Planned Parenthood clinics, claiming, “Planned Parenthoods have been placed inside cities by white supremacists to do the Devil’s work," he said.

Planned Parenthood responded to West's claims with a statement from their Director of Black Leadership and Engagement, Nia Martin-Robinson, obtained by Bustle. "Black women are free to make our own decisions about our bodies and pregnancies, and want and deserve to have the best medical care available," Martin-Robinson said, directly refuting West's claims. "Any insinuation that abortion is Black genocide is offensive and infantilizing." She continued: "The real threat to Black communities' safety, health, and lives stems from lack of access to quality, affordable health care, police violence, and the criminalization of reproductive health care by anti-abortion opposition. At Planned Parenthood, we trust and we stand with Black women who have, and continue to lead the charge when it comes to health, rights, and bodily autonomy of those in their communities."

In addition to Planned Parenthood's statements, a simple look at recent history shows that West's new theory is very likely not the case. In fact, there has been more ties between white supremacy and pro-life activism in recent years, like when anti-abortion group New Wave Feminists was forced to oust their former leader Kristen Walker Hatten in 2018 after she shared white supremacist messages on Twitter and admitted that she was "racist by today's standards." Basically, if Planned Parenthood clinics were planted by anyone, it definitely wasn't by white supremacists.

This is not the first time that West has spoken about abortion and Planned Parenthood, although this is the first time he's been so direct about it. In a 2019 interview with Big Boy, when West was asked about his public support of Donald Trump, he implied that he was heavily against both abortion and Plan B pills, falsely equating the two, and vaguely acknowledged a conspiracy theory that Democrats are controlling the minds of Black people, specifically making Black women abort their children. "We're brainwashed out here, bro," West said. "This is a free man talking. Democrats had us voting [for] Democrats with food stamps for years. What are you talking about? Guns in the '80s, taking the fathers out the home, Plan B, lowering our votes, making us abort our children. Thou shall not kill."

At the time, Planned Parenthood didn't take West's statement lightly, specifically the assumption that Black women don't have autonomy over their own bodies. "As Black women, we make our own decisions about our bodies and pregnancies, and want and deserve to have access to the best medical care available," a spokesperson for Planned Parenthood told TMZ. "Misinformation like this is meant to shame us and keep us from making our own health care decisions. Black women want and deserve support and access to the full range of reproductive health care, but this persistent lie is threatening our ability to obtain it."