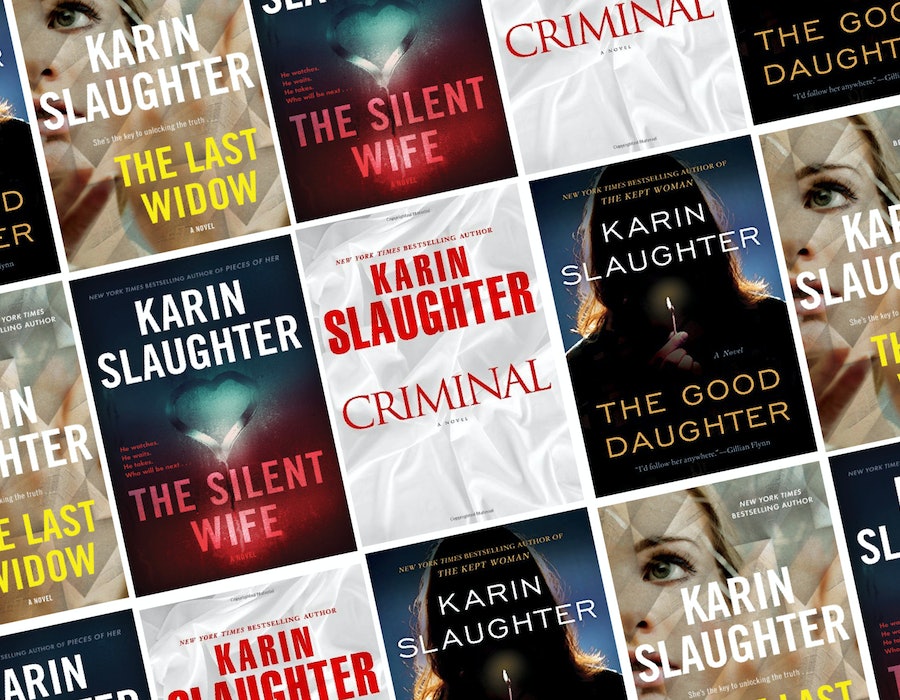 Karin Slaughter is the bestselling author of 20 novels, all of which center on the violence that is mostly committed against women. Now two decades into her storied career, Slaughter reflects on watching women begin to embrace their desire to read and learn more about these crimes.

When I wrote my first novel, Blindsighted — which was 20 books and 20 years ago — I wrote the story for myself. People always say write what you know, but I think you should also write what you want to know, and I was focused on the causes and long-lasting effects of violence against women. Part of this came from my own personal experience. When I was a child, my grandmother was horrifically abused by my grandfather, yet it was something my family never spoke about. We ignored the bruises and broken bones, and even teased her about being clumsy. As I got older and realized what was going on, we still kept the open secret. Looking back, I came to understand that our silence only protected one person: the monster abusing my grandmother.

At the beginning of my career, reviewers, sales teams, bookstores, and readers tended to categorize my work as “masculine thrillers.” Other than Kathy Reichs and Patricia Cornwell there weren’t many other American women writing stories that were really graphic and gritty, taking an unflinching look at crimes against women. The message we got was, “Wow, these women write visceral and really graphic novels like men do, but they have ovaries so what can we call them?” Absent any imagination, they settled on saying that we “write like men.” So, I was constantly questioned after Blindsighted came out about why I was writing about stuff men usually wrote about, as if it was abnormal for women to be interested in crimes that happen predominantly against women. I got questions my male contemporaries were never asked, like, “Why are you writing about strong women?” “Do you have children?” or, “Is it hard for you to leave your family at home and tour?” They seem to have skipped the part where 80% of all fiction buyers are women so we’re obviously interested in reading about this, so of course, it’s entirely natural to be interested in writing about it. But I got fed up with these gendered questions, so I finally said, “If you start asking Lee Child why he writes about strong men or ask Mike Connelly how hard it is for him to leave his children when he tours, then I’ll answer those questions, too.”

I was constantly questioned about why I was writing about stuff men usually wrote about, as if it was abnormal for women to be interested in crimes that happen predominantly against women.

The good news is that I rarely have to address those questions today, and that shift has been one of the biggest changes in the genre since I started writing. I’m so glad that writers like Gillian Flynn, Oyinkan Braithwaite and Lisa Gardner are delivering unflinching looks at everyday life through the lens of a thriller, and I love how these women write from a base level of a darker psychology – the kind of darkness that resides in women that most men don’t really understand or even know about. If you think about the fact that women are more likely to use poison to murder than men, that they are literally feeding death to their victims, then helping them to the bathroom, pressing a cold compress to their brow, and poisoning them again at the next meal — that is some sick and twisted stuff that is far more horrific than some angry guy shooting another angry guy and that’s the end of the story. Of course, even today, when women write about murder close to home, it’s called “domestic suspense.” When men write in the same category, they call it a thriller.

What’s most interesting to me is that when I started, I would have a lot of women say to me, “Oh, you know I feel so guilty because I love reading your books.” It reminded me a bit of my grandmother’s situation, where awful things that happen to women were a source of shame and secrecy. Now my readers don’t feel guilty at all about saying they are interested in these topics. In fact, women in general have embraced their desire to know more about crime and punishment.

That’s how the world has changed the most since I first started writing. Maybe it’s podcasts or the exceptional work that early pioneers like Michelle McNamara did, but women know it’s okay now to be openly interested in the crimes that are mostly being committed against women. And I think that something even more important comes with that — women today are far less likely to judge women who are victims of violent crime. Understanding the psychology of why a wife stays with an abuser, the unwarranted shame of a college student who was raped at a party, or the everyday exhaustion of dealing with micro-aggressions and sexual harassment, has opened up welcome conversations within the genre and in society at large. There is no worse judge of women than other women, and we are learning through our experiences to finally cut each other some slack.

I still write for myself, but I now do so with the knowledge and conviction that it is more important than ever to write about what is important to me. My new book The Silent Wife was a chance for me to revisit places and characters I’ve written about before and look at them from a new perspective. From the beginning, I felt it was important to openly describe what that violence actually looks like, and to explore the long-lasting effects of trauma in as realistic a way as possible. Rape is not titillating. Domestic violence is not a private matter. Sexual harassment is not a victimless crime.

I feel like telling honest stories of violence against women helps shine a light on what is really going on, sometimes not even behind closed doors. For so long, polite society decided that we were willing to put up with a certain level of violence against women because we told ourselves that bad things only happen to bad women: Why was she drinking? What was she wearing? Why was she in that part of town?

When women write about murder close to home, it’s called “domestic suspense.” When men write in the same category, they call it a thriller.

My stories take those questions and expose the danger inherent in their positioning. No one hears about a robbery and asks what the victim was doing in that part of town. The cops never say to the family of a murder victim, “Hey, this investigation is going to be difficult. Are you sure you want us to do it?” Rape, assault, harassment, and coercion are traumatic, life altering, soul-shattering crimes. We need to openly talk about them, and discuss the psychic toll they take on not just women, but husbands, fathers, sons, and communities, because the only people who are protected by our silence or worse, apathy, are the perpetrators.

When I think about the next 20 years, I’m under no delusion that violence against women will be eradicated, but we as a society can come to a place where it is not tolerated, and ostracize or imprison the people who think it’s okay. My part of that quest is to keep telling honest stories we do not often hear about survivors, fighters, mothers, daughters, sisters, wives, friends and rogues.

I look forward to my readers taking this journey alongside me.

Slaughter's latest novel, The Silent Wife, is available wherever books are sold.

More like this
10 Must-Read New Books Out This Week
By K.W. Colyard
The Biggest Differences Between 'Bullet Train' & The Book It’s Based On
By Arya Roshanian
'The Sandman’s Ending Is A Departure From Neil Gaiman’s Comic Book Series
By Kadin Burnett
Candice Brathwaite Is Over Using Her Own Life For Material
By Shahed Ezaydi
Get Even More From Bustle — Sign Up For The Newsletter