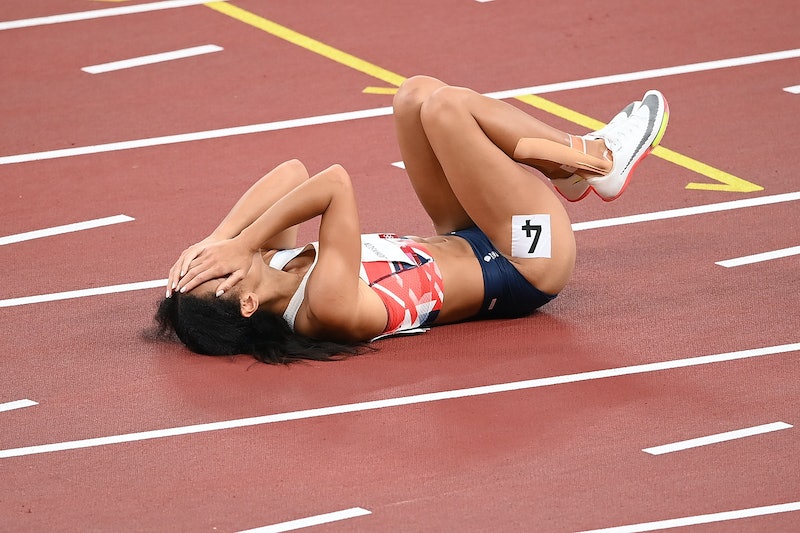 Team GB’s Katarina Johnson-Thompson has withdrawn from the women’s heptathlon after collapsing due to a calf injury in the 200m. BBC Sport said it’s likely to mark the end of the 28-year-old Liverpudlian’s time at the Tokyo Olympics.

Johnson-Thompson entered the race strong, overtaking a number of her opponents on the first turn. However, she then slowed suddenly and eventually came to a stop. The world champion dropped to the floor and covered her face, visibly distraught.

Refusing to be wheelchaired off, she stood again and jogged over the finish line. However, she’s been disqualified because she left her lane

British Athletics has since confirmed that she had pulled out of the race, having “sustained an injury to her right calf.”

Although there were reports that this was an old injury involved the athlete’s Achilles, British Athletics have disputed that, saying: “To confirm, it is not a repeat of her recent Achilles injury, which was on her left leg.”

Denise Lewis, who won gold for Great Britain at the 2000 Sydney Olympics in women's heptathlon wrote on the BBC, “I'm just so gutted for her. She's worked so hard to get to this stage ... I think she has to take stock and protect herself, not only physically but mentally.”

Similarly, Jessica Ennis-Hill said, “For the years that she's had in the sport, there's been some lows. It seems so unfair that she has to be in this position again.”