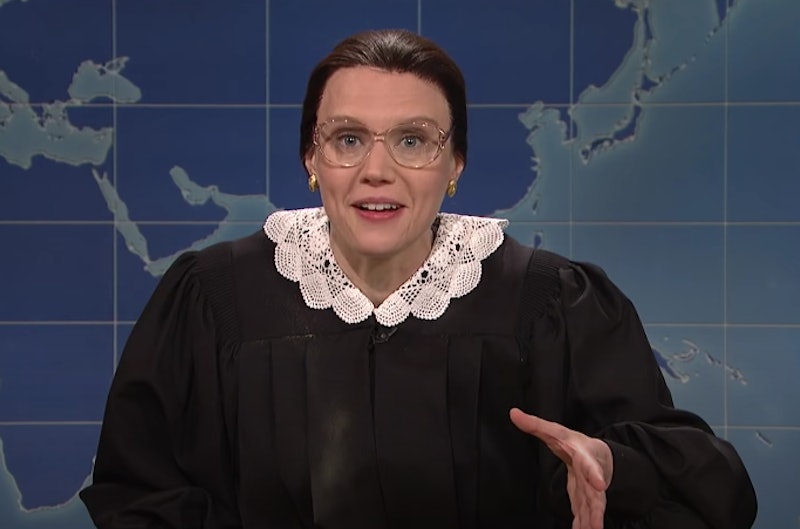 Following the passing of the Supreme Court Justice and feminist icon, Kate McKinnon paid tribute to Ruth Bader Ginsburg, whom she portrayed on Saturday Night Live. Ginsburg, who was a key figure in the fight women's rights in the 1970s and during her 27 years on the Supreme Court, passed away on Friday following a fight with pancreatic cancer, as per NPR. Over the weekend, McKinnon issued a statement that honored Justice Ginsburg, calling the legendary judge "a real-life superhero: a beacon of hope, a warrior for justice," as per USA Today.

McKinnon, who has played a version of the legal icon, aka the "Notorious RBG," on SNL for years, wrote that portraying the associate justice was "a profound joy" because she, as a performer, "could always feel the overwhelming love and gratitude that the audience had for her." McKinnon had met Ginsburg several times, including at a production of Fiddler on the Roof in 2019, and said it was one of the "great honors of my life" to "to shake her hand, and to thank her for her lifetime of service to this country."

The comedy-loving version of Ginsburg on SNL featured the justice's iconic robe and lace collar, and often included a major diss of her conservative political opponents, dubbed a "Ginsburn." The phrase became so well-known that the real Ginsburg even acknowledged it in public appearances, admitting she wished she could use it with her colleagues on the court. In 2018, Ginsburg praised McKinnon's impression and "Ginsburn" style during an appearance at the Sundance Film Festival, saying, "I liked the actress who portrayed me, and I would like to say 'Ginsburned!' sometimes to my colleagues."

In years past, McKinnon would appear frequently on SNL's "Weekend Update" segment as Ginsburg, often marking landmark Supreme Court decisions. In 2015,McKinnon's Notorious RBG appeared in honor of the historic Marriage Equality ruling, delivering several iconic "Ginsburns." Following the 2016 election, McKinnon's RBG impersonations began to mirror many progressive's anxieties about the Supreme Court in the Trump-era. In Feb. of 2017, McKinnon discussed retiring as RBG, noting that the justice would not be likely to leave the court for retirement under the current president.

In what might have been McKinnon's final RBG sketch, the comedian satirized the Supreme Court Justice's rigorous workout routine, which she maintained well into her old age. In the April sketch, the comedian joked that the Ginsburg workout featured her "punching bags" named "Kavanaugh and Gorsuch."

McKinnon wasn't the only actor who played Ginsburg to honor the justice's memory. Felicity Jones, who played Ginsburg in On the Basis of Sex released a statement honoring her as "a public figure who stood for integrity and justice — a responsibility she did not wear lightly." Jones continued, per CNN, saying, "She will be missed not only as a beacon of light in these difficult times, but for her razor sharp wit and extraordinary humanity. She taught us all so much. I will miss her deeply."