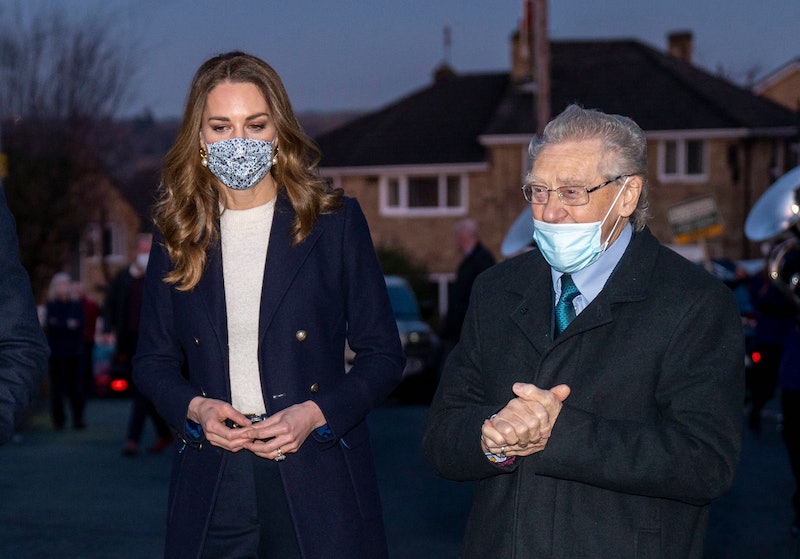 Over the last ten months, we've all been trying our best to keep busy. Between Zoom calls and entertaining her three children, Kate, the Duchess of Cambridge, has picked up another responsibility too – but this one was kept somewhat secret. Yesterday (Dec. 7), Kate Middleton met the man she’s been chatting to during the pandemic via the NHS Volunteer Responders programme, Len Gardner. Speaking about their phone calls, the 85 year old said, “I will treasure our conversations for the rest of my life.”

Kate was put in touch with Len and his wife Shirley, who is 84, by the Royal Voluntary Service. Through the scheme, they shared phone calls and letters. Their first was in May while Middleton was at the royal's country estate at Amner Hall in Norfolk. “After the first two sentences I didn’t feel like I was talking to someone so important,” Len told The Sun. “She told me Prince George and Princess Charlotte were playing in the garden and she was keeping an eye on them through the window.”

Len also shared that he had a passion for Italian food but couldn’t make his own pasta in lockdown because he didn’t have the right equipment or flour. However, three days after he shared this with Kate, a new pasta machine arrived. And a few days after that he got two kilos of flour from Buckingham Palace. He said, “Those calls helped me because they gave me something to look forward to.”

After chatting with Len for months, the Duke and Duchess of Cambridge stopped off at his home in Batley, West Yorkshire, on Dec. 7. It was part of their festive tour of the UK. The royals were joined by a brass band and spoke to both Len and Shirley before having a dance to the band's music.

Speaking about connecting Len and Kate, Catherine Johnstone, CEO of the Royal Voluntary Service, said: “Her ‘check-in-and-chat’ call to Len has meant the world to him. It’s so important to highlight the power of conversation ... You really can make someone’s day.”