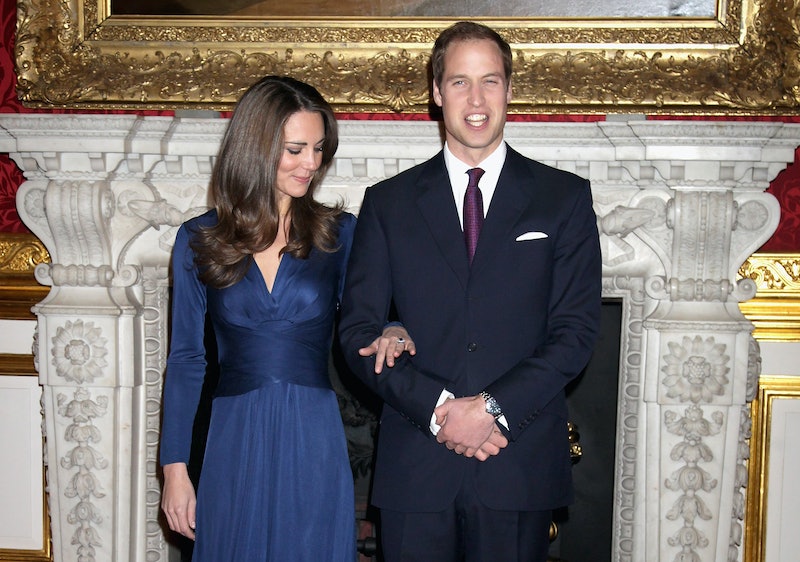 It has become royal tradition for new images be shared on social media to celebrate or mark significant events like birthdays. When it comes to the Cambridges, many of the images are even taken by Kate Middleton, who is an avid photographer. But the Duke and Duchess have gone for a more official route to mark their 10th wedding anniversary. Ten years ago today, April 29, Prince William and Kate Middleton exchanged vows at Westminster Abbey in a ceremony viewed by millions. To mark their anniversary, the Duke and Duchess of Cambridge have shared two new stunning portraits which are giving us major flashbacks to another iconic royal moment.

Taken by celebrity photographer Chris Floyd, who has captured the likes of Paul McCartney and Victoria Beckham, the Duke and Duchess of Cambridge shared two pictures on their Instagram to celebrate their milestone. In both images, the couple is absolutely glowing, but it’s the one taken outside Kensington Palace, where Prince William is hugging his wife as she flashes a winning smile, that is giving us serious royal flashbacks.

When William and Kate were engaged in 2011, two official photographs were released – one of which saw the couple embracing as Kate gave a spotlight to her engagement ring, which had previously belonged to Princess Diana. In the new portraits, the royal couple is posing nearly identically and the engagement ring is on full display. This time they are outside, donning colour-coordinated outfits, with Kate wearing a gorgeous floral dress by designer Ghost London.

The original pictures were taken by Mario Testino, who famously photographed the royal family on multiple occasions. At the time, the fashion photographer said the couple were “brimming with happiness,” and that certainly seems to be the case 10 years on, as is evident in the images that were recently shared.

This was also the case at a recent royal engagement attended by the couple, the first since the death of Prince Philip. Kate and William visited a farm and youth project in Durham, where they handled sheep, drove a tractor, and played golf. The latter saw the couple in stitches at Kate’s golfing technique.