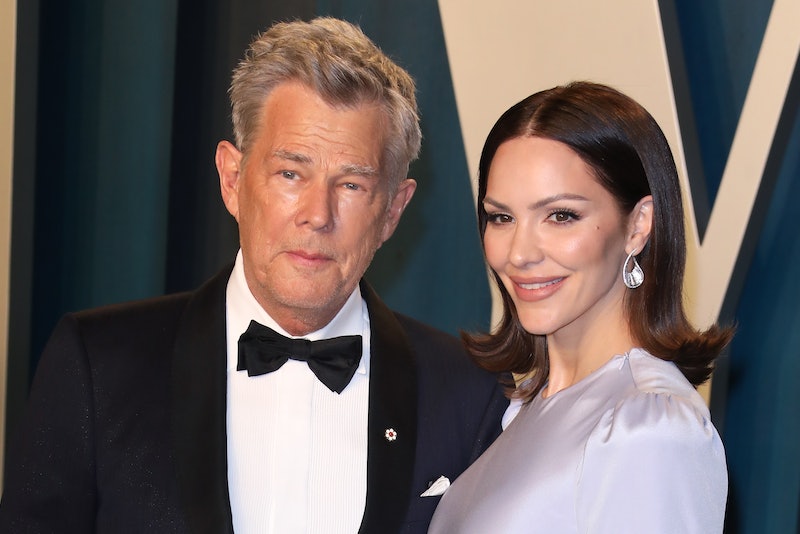 After a month of social media silence, this singer's absence might have just been explained. Katharine McPhee is reportedly pregnant and expecting her first child with husband David Foster, as reported by PEOPLE on Thursday, Oct. 8. Bustle reached out to McPhee's representative for comment but did not receive an immediate response.

The couple was recently spotted in Montecito, Calif., where McPhee was seen with a full-on bump as they shopped for baby supplies. Multiple sources confirmed the news to People, and other outlets have also confirmed the news. This will mark the first child for McPhee, but the sixth for Foster, who is already a parent to five adult daughters — Sara, Erin, and Jordan, who he shares with second wife Rebecca Dyer, and Allison and Amy from previous relationships.

A source further commented on McPhee and Foster's big news, telling E! News that the Smash star and her Grammy-winning musician husband decided to try for a baby while at home amidst the COVID-19 pandemic. "Katharine has always wanted to be a mom and to have a baby with David," the source claimed. "They weren't necessarily trying for a baby but were open to it happening this year. Since work has slowed down for both of them, they knew this year would be a great time for it to happen."

According to the outlet, Foster's daughters are also thrilled about the news. "They told their immediate family members about a month ago and everyone was very shocked and excited," the source said. "Erin Foster joked that their kids will be the same age."

McPhee and Foster's history dates back all the way to her season of American Idol in 2006, where she came in second place to winner Taylor Hicks. "We met on American Idol when I was a contestant and he was a mentor with Andrea Bocelli," McPhee said in an interview with TODAY in November 2019. "I have always just admired him and loved him and he's always been so great to people around him." However, they didn't start dating until over a decade later, and were first spotted on a dinner date in May 2017.

The couple got engaged just a year later in July 2018, and McPhee and Foster finally tied the knot in a romantic ceremony at St. Yeghiche's Church in London on June 28, 2019. "Exactly 13 years ago today my very first single, Somewhere Over The Rainbow, was released right after Idol," the singer wrote on Instagram to commemorate her wedding day. "Today... I’m marrying the man who produced it. Life is full of beautiful coincidences, isn’t it?"

More like this
Adam Levine & Behati Prinsloo Welcome Their Third Child Together
By Jake Viswanath
Meghan Trainor & Daryl Sabara Are Expecting Their Second Baby
By Jake Viswanath
Hilary Duff's Husband Matthew Koma Has Her Name Tattooed On His Butt
By Jake Viswanath and Stephanie Downs
5 Wild Theories About Miley Cyrus’ “Flowers” Music Video
By Jake Viswanath
Get Even More From Bustle — Sign Up For The Newsletter
From hair trends to relationship advice, our daily newsletter has everything you need to sound like a person who’s on TikTok, even if you aren’t.