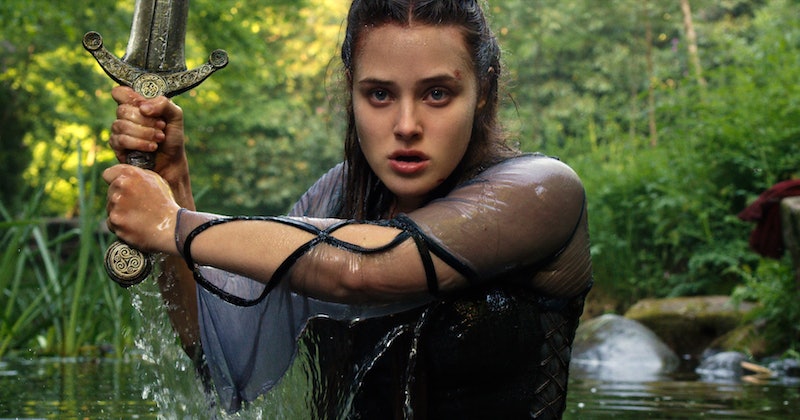 “We are putting a woman at the epicenter of this legendary tale and I think that has power in itself,” Katherine Langford tells Bustle of her latest Netflix series, Cursed. The fantasy drama follows Langford’s character, Nimue, a rebel sorceress with mysterious powers. The story also explores the familiar King Arthur legend — but is a decidedly feminist retelling.

Adapted from the titular book by Tom Wheeler and illustrated by Frank Miller, the story is filled with bloody battles as Nimue embarks on her destiny to become the legend's infamous Lady of the Lake. This role is something completely new for Langford, whose previous work includes playing Hannah Baker in 13 Reasons Why and the bratty Meg Thrombly in Knives Out. The sword fighting action sequences were grueling, but the chance to play Nimue was well worth the challenge. “I grew up as a huge fan of sci-fi,” says Langford. “My favorite movies were Cinderella and Mars Attacks!, so to be able to tell a story that is within that genre for the first time fulfills a childhood dream for me.”

Nimue’s story is one of resilience in the face of grave circumstances. In the start of the series she is an outcast, itching to venture out on her own. But just as she takes her first steps toward independence, her hometown is besieged by a mysterious army hunting down the Fey Kind across the land. Grieving and hell-bent on surviving, Nimue embarks on a journey to save her people with the help of a handsome mercenary named Arthur (Devon Terrell).

When you strip away all the supernatural happenings, Cursed is essentially a coming-of-age story about a young girl trying to succeed in a man’s world — which resonated with Langford. “Once [Nimue] is able to embrace these powers, this part of her which she's been told she should be ashamed of, we see her grow and really start to come into herself,” says Langford.

It is an empowering message, especially for a genre that often casts women aside as doting mothers and wives, but never the hero themselves. Wheeler’s clever retelling of the Arthurian legend allows audiences to see a young woman come to power, following the arc typically reserved for their male counterparts. Nimue also embodies many of the traditional hero tropes: she is brave, she is clever and she has a true moral compass. Where she diverges is in her unwavering empathy (something that Langford admires most about her).

“I think the definition of a hero or superhero isn't necessarily about having extraordinary abilities but about someone’s ability to overcome,” says Langford. “I hope that the young women who watch this recognize their own courage, embrace all the parts of themselves — the good the bad the ugly — and know that you can be whoever you want to be.”