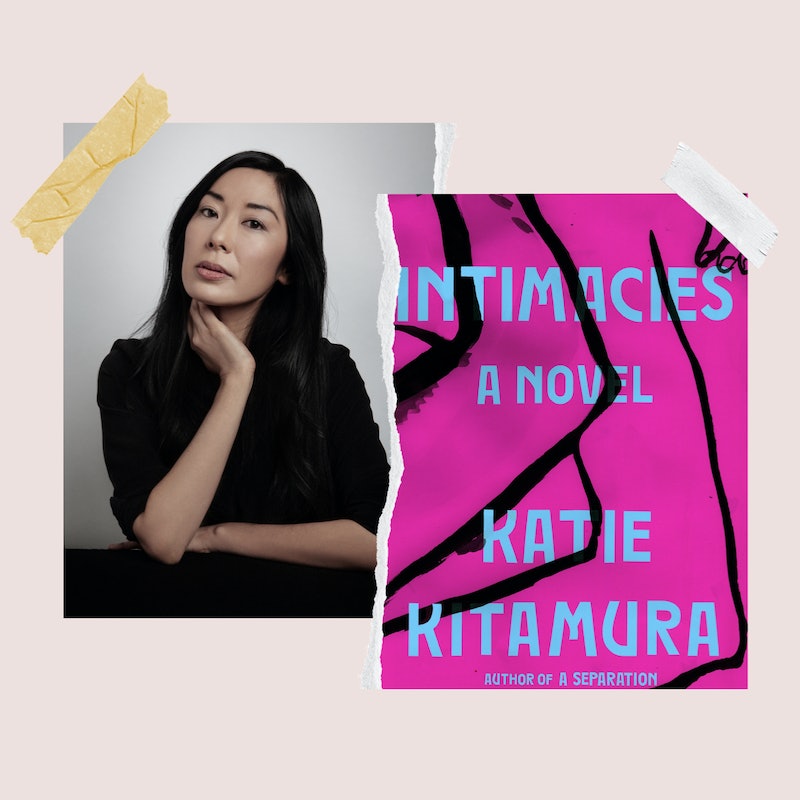 In a scene from Katie Kitamura’s new novel, Intimacies, the narrator is interpreting for an African dictator, who’s on trial for crimes against humanity in The Hague, at an institution based on the U.N.’s International Court of Justice. He beckons the woman closer, seeming to expect that she’ll empathize with him. Then, as her job requires, she translates detailed acts of terror, murder, and rape on his behalf, attempting equanimity in front of the court. Later in the novel, after months by his side, she says, “I no longer believed that equanimity was either tenable or desirable. It corroded everything inside.”

Intimacies explores themes of connection and culpability, packaged in a taut page-turner, following the unnamed main character through her time in the Netherlands. The novel comes after three critically acclaimed books from the author, the most recent of which, 2018’s A Separation, is being adapted into a film by actor Katherine Waterston.

Kitamura — a novelist, art critic, and New York University professor — talks to Bustle about her new book, ageism, and the impossibility of professional objectivity.

Both A Separation and Intimacies think about complicity. Do you think the act of interpreting, whether in a court or as a writer, inherently entails allying or identifying with the person who’s being interpreted?

There’s a shared terrain between the work of my central narrators (in A Separation, a translator; in Intimacies, an interpreter) and the act of reading — and also of writing itself. Writing can be described, at least in some cases, as an act of transmission. What’s the ethical cost of acting as a conduit for language? How does it alter your position? There’s no single answer. But I think of writing as an opportunity to lay out and consider [these] questions.

In medicine, we use the term “vicarious trauma,” the idea of front-line providers being traumatized by constant exposure to death, injuries, and violence. A quote from the book reminded me of it: “Our daily activity hinged on the repeated description — not simply description, but elaboration and delineation — of matters that were, outside, generally subject to euphemism.”

I wasn’t aware of this concept, but your description speaks to me very powerfully, and certainly the idea is everywhere in the novel. When I interviewed interpreters, they told me that psychiatric counseling was made available to them, because of the nature of their work and the exposure to trauma.

Can you talk about how race and racism figure in your work?

It’s important that the central character is Japanese American. To me, the most significant scene in the novel is when the former president tells her that she belongs to two countries with deeply violent histories of aggression and imperialism. The novel is primarily about complicity — the way that we are complicit in the societies we are part of, the language we use, the institutions we serve. That scene’s intended to be a destabilizing moment for the narrator, who’s invested in the idea of her own professional and personal neutrality.

I’ve also been thinking about youth versus age. Can you speak about how age and aging impact her?

I don’t think of the narrator as young, but I’ve noticed that in descriptions of the novel, she’s almost always described as a young woman. Culturally, we seem to still value youth, as if it contains more narrative possibilities. But this narrator is not a young woman. This was important to me. In some ways, the hopefulness at the end is counterbalanced by a certain amount of hard-earned realism and experience.

Can you talk about your research methods for this novel?

I did many of the usual things: I spent time in The Hague, I observed a trial, I interviewed interpreters, I read. The International Criminal Court, on which the court in the novel is based, makes the vast majority of the trial transcripts available online. Reading those transcripts immerses you in the language of the world.

I think we’re tasked with maintaining cognitive dissonance between the terrible act and the smooth functioning of the world — not merely to observe it, but to keep that irreconcilable gap present in our minds, to force ourselves to live with it.

What can we hope to read next by you?

I’m working on a new novel about a performer. It will be the third in what I’ve loosely thought of as a trilogy about work and language — the first being translation in A Separation, the second being interpretation in Intimacies — but it’s in very early days.