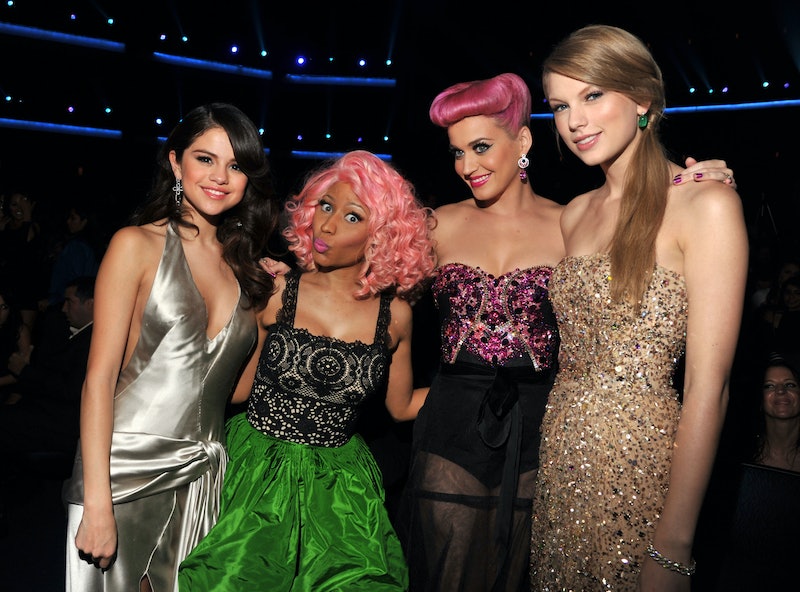 There's perhaps no place more toxic for artists than Twitter. And one popstar has had enough of the negativity. Katy Perry called out Twitter stan culture and how people online, both fans and trolls, tend to pit female artists against each other. And she held nothing back.

During an interview with Zane Lowe on Apple Music 1, Perry made a point about how toxic stans can be on Twitter when it comes to talking about their favorite female pop stars, but their male peers mostly don't receive the same treatment. "Somebody want to take my Twitter account and read comments?," she asked. "No you don't, because it's all about, who's better than who? Who's skinner than who? Who's sold more number ones than who? Who's doing better this year than who? Who made this much more? It's like, okay, well, what about just liking the music?"

The singer explained that while she is competitive in that she wants her art to succeed and reach people, she doesn't like to pit herself against other female artists. "I actually truly want every single female in the industry to feel supported and loved and feel like they can speak their truth and deliver their message, no matter how many of us women are in the industry," she said. She went on to recall how she used to feel that she couldn't talk to her female peers about their experiences due to lack of support. "We're literally going through the exact same thing," she recalled thinking. "There's only five other people in the world that are going through this, and you're in the same room. Can we please just have some f*cking wine and talk about how hard this is?"

Immediately, some fans took to Twitter to praise Perry's remarks, even commenting that she ended "stan Twitter" in two minutes and 17 seconds. Although Perry conceded that rapports among artists is better today than it was "five years ago," she said that culture still needs to be spread online. "I think amongst peers, there's been more understanding, compassion, and love, but there also has to be in the listeners and the fans," she explained. "They have to not play the petty game with us."

The singer has stayed true to the word as far as supporting her peers. In an interview with the Los Angeles Times while promoting her own upcoming album, Perry said she makes a conscious effort to listen to albums from other female singers, especially newer offerings like Lady Gaga's Chromatica, Selena Gomez's Rare, Halsey's Manic, and of course, her former frenemy Taylor Swift's Folklore. “I’m halfway through it,” she said of Swift's surprise new album. "I love, love 'My Tears Ricochet.'" Twitter stans, take note.

More like this
Katy Perry Regrets Not Working With Billie Eilish On “Ocean Eyes”
By Alyssa Lapid
Twitter Can’t Believe The Madonna Biopic Is Scrapped & Fans Have A Solution
By Alyssa Lapid
Twitter Is Panicking Over Panic! At The Disco Breaking Up
By Radhika Menon
Jay-Z Is Performing At The Grammys, Meaning Beyoncé Might Actually Show Up
By Jake Viswanath
Get Even More From Bustle — Sign Up For The Newsletter
From hair trends to relationship advice, our daily newsletter has everything you need to sound like a person who’s on TikTok, even if you aren’t.