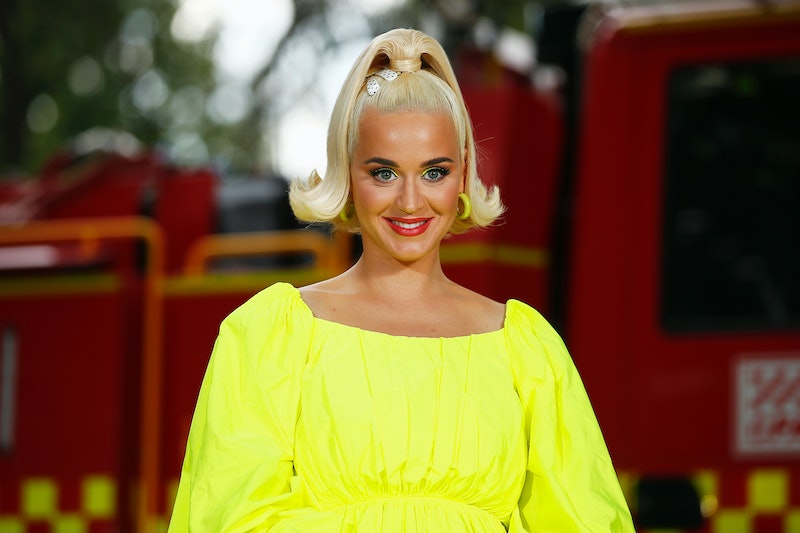 This mom-to-be has a whole new take on life. On Sunday, Katy Perry said pregnancy made her "grateful" for her body during an interview on Australian radio show Kyle and Jackie O. The singer announced that she is expecting her first child with fiancé Orlando Bloom in March, and the baby is due in late summer. Ever since then, she's been sharing pregnancy updates with fans, showing off her baby bump in new music videos and opening up about impending motherhood.

During the interview, Perry noted that being pregnant has been a life-changing experience, and this time made her truly appreciate other mothers. "I'm really grateful for my body," she said. "I have so much respect for other women going through this process. You get a whole new viewpoint being pregnant."

Perry added that she likes to be, "a mother on the move," and that neither the pregnancy nor the COVID-19 pandemic has stopped her from working on new music. The singer said she's continued record songs and is still at work on her forthcoming album, Smile, which drops on August 14. Perry wore a Smile crop top during the appearance as well, both to show off her baby bump and tease some of the upcoming merch for the release.

The Witness singer said she's "working really hard," but that the "one blessing" of the stay-at-home lockdown orders caused by the pandemic is that she doesn't, "have to travel extremely, which can really take it out of you." Perry, who is in her third trimester, noted that she's at the stage of the pregnancy where "everything is swollen," which would make flying or traveling via tour bus uncomfortable.

Perry also revealed that Bloom tends to be quite active as well and that the two would be surprised if the baby didn't end up being energetic. "The DNA between the both of us is very high energy, so we'll be surprised if she's a lazy one," she said. She clarified that, no matter what her future daughter's personality, both parents are prepared. She added: "She'll be what she is, and I'm sure she's just here to teach us a lesson."

In June, Bloom praised Perry's resilience and focus throughout the pregnancy, calling his fiancé a, "force of nature," during an interview with Associated Press. He joked that "aside from the giant belly," it's been pretty much, "business as usual." He added: "It's been really impressive. There's no complaining, she's all about it. It's pretty awe-inspiring to see how she handles herself during this time."

It seems that August is poised to be an eventful month for Perry, who will drop her new album and likely welcome her first child to the world. Given how much the star has accomplished over the past couple of months, it's clear she's ready for this next phase of being a "mother on the move."