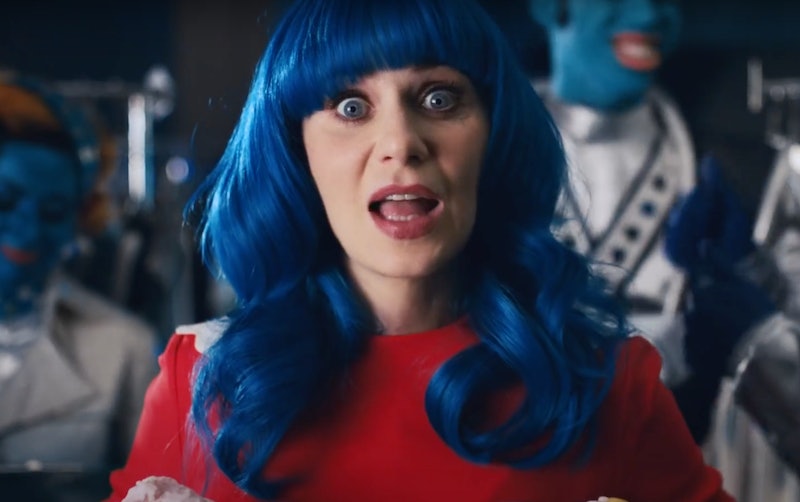 As it turns out, not everyone is seeing double. On Monday, Dec. 21, Katy Perry dropped her music video for "Not the End of the World" starring Zooey Deschanel, and it's a nod to the years-long chatter that the two are celebrity lookalikes. But while some viewers feel that the two stars — who for a long time shared the same blue eyes, brunette hair, and iconic bangs — still have an uncanny resemblance, others remain less convinced.

The "Not the End of the World" music video follows a group of intergalactic blue aliens who attempt to abduct Perry and blow up the world. Unfortunately, the aliens get confused and accidentally beam up Deschanel instead. Unsurprisingly, fans were quick to react on Twitter, with many celebrating the two stars for fully leaning into their doppelgänger status.

"2020 is sh*t but @katyperry putting @ZooeyDeschanel in her music video and embracing that they look alike is a highlight," one fan tweeted. "Who better to play Katy Perry than the one and only Zooey Deschanel," someone else wrote. Shockingly, some others didn't realize until watching the video how much the stars have in common. "I NEVER REALIZED HOW MUCH ZOOEY DESCHANEL LOOKS LIKE KATY PERRY," another fan added.

Other people on social media are a bit more skeptical though, with many insisting that they don't see a resemblance at all. "Dude. Am I the only one who disagrees with everyone saying Zooey looks like Katy perry?" a fan tweeted. "I don't see it at all." Another Twitter user came through to criticize Deschanel's performance. "How is Zooey Deschanel so bad at playing Katy Perry when they look exactly like the same person?" they wrote.

Several other fans felt the reference was simply too old. "Katy Perry should've made the lookalike gag 7 years ago," someone wrote on Twitter. Another person echoed that same sentiment, adding that "this Katy Perry - Zooey Deschanel joke would've worked if it was done when Zooey ACTUALLY looked like Katy back in 2010."

This debate about whether Perry and Deschanel actually look alike has been going on for over a decade now. In 2009, Deschanel first addressed the resemblance, saying that the comparison was "a bit annoying." "I'm happy that she's famous enough now that she's not going out and being mistaken for me," the actor added. Now, it seems enough time has passed that both stars can laugh at the comparison. However, it's also entirely possible they're just not twinning like they used to anymore.