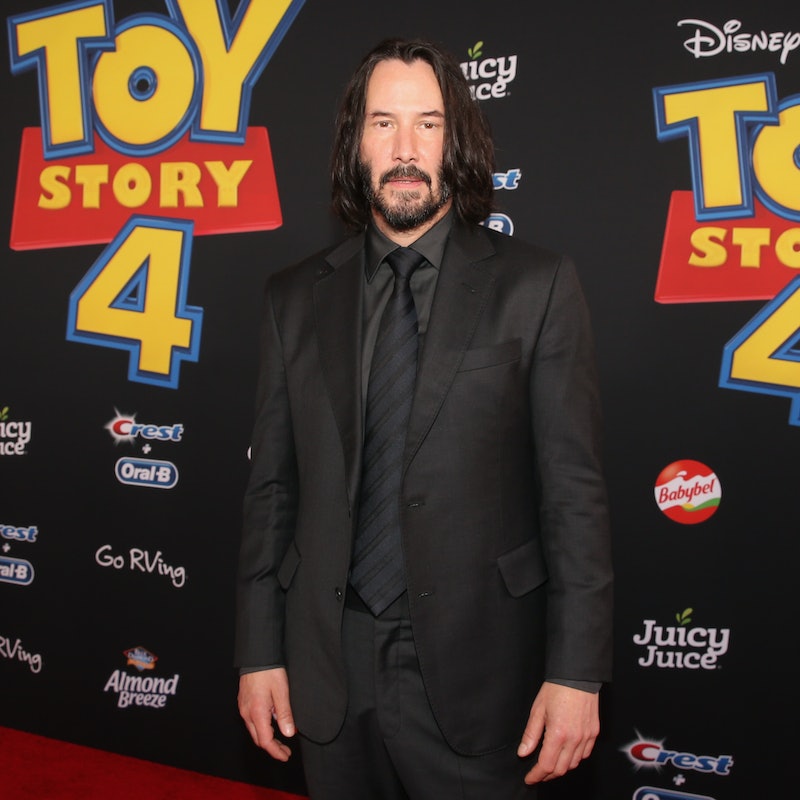 The internet's list of self-proclaimed (fantasy) boyfriends feels like it's growing longer by the minute, but no one is complaining. The latest addition to the list is Keanu Reeves, whose roles as the assassin John Wick in John Wick 3, himself in Always Be My Maybe, the utterly hilarious scene-stealing Duke Kaboom in Toy Story 4, and his return to Ted "Theodore" Logan in Bill and Ted Face the Music, have re-ignited everyone’s interests in the legendary actor — and most importantly, who he’s dating. Keanu Reeves’ dating timeline proves that he keeps his relationships very private, but what has been made public is filled with everything from A-list actors, burgeoning directors, and one heart-wrenching tragedy.

Reeves has been on the scene for quite a while, achieving Hollywood stardom in the mid-1980s with his first major film appearance in Youngblood. In fact, he actually met his first celebrity girlfriend on the set of one of his first films, dating his Babes In Toyland costar Jill Schoelen. They ended up getting serious, dating for three years before they both moved on with even more high-profile relationships.

Even though there aren't many publicly known details about his love life, Reeves has certainly had his fair share of flings, with both well-known celebs and women who lived a more quiet life before he came into the picture. So who are the ladies that have captured Reeves’ heart? Read on to find out.

Reeves starred alongside Jill Schoelen in one of his earliest films, 1986's Babes in Toyland, and they took their romance off-screen soon after. According to Popsugar, the actors dated for three years before they split. It wasn't a huge loss for Schoelen though, as she moved on with another emerging heartthrob at the time: Brad Pitt, with whom she was even engaged to for three months.

OK, so Reeves didn't actually date Winona Ryder, his co-star in the 1992 film Bram Stoker's Dracula, in which their characters got married, but Ryder thinks they might technically be married in real life, so it's probably worth a mention.

In an August 2018 interview with Entertainment Weekly, Ryder dropped a bombshell: she thinks the wedding scene she shot with Reeves wasn't fictional. “We actually got married in Dracula. No, I swear to god I think we’re married in real life," she said. “In that scene, [director] Francis [Ford Coppola] used a real Romanian priest. We shot the master and he did the whole thing. So I think we’re married.”

Ryder stated that they had shot the entire ceremony and said their "I do"s. When Reeves asked, “We said yes?," Ryder responded, “Don’t you remember that? It was on Valentine’s Day.” Finally, Reeves was forced to agree: “Oh my gosh, we’re married.”

Director Coppola backed the theory, telling The Guardian, "This is pretty authentic and I think very beautiful, because we actually did the ceremony and had the priest do the ceremony,” Coppola said. “So in a sense, when we were all done, we realized that Keanu and Winona really are married as a result of this scene and this ceremony.”

For everyone's sake, hopefully this union is only recognized in Romania.

Even though he might have accidentally married Ryder while filming Dracula, Reeves did date someone he met on set — consciously. The actor dated Sofia Coppola, Francis' daughter and now a director in her own right, in 1992 after they met on the set of her father's film, according to Entertainment Tonight. It's not known exactly when they split up.

Although the Speed co-stars technically didn't date, they did have a romantic connection without even knowing about it. In recent months, both Reeves and Bullock confessed during separate appearances on The Ellen DeGeneres Show that they had little crushes on each other while filming Speed in 1997, but neither of them realized that the feelings were reciprocated. They remain friends to this day, but oh, what could have been!

Reeves' relationship with Syme might be his most significant, but sadly, it ended in tragedy. The couple got serious quickly after beginning to date in 1999, according to People, becoming pregnant with their first child. Sadly, they had to bury their daughter Ava, who was stillborn at eight months, in January 2000, and although the romance couldn't survive their grief, they still remained friends after the split. Syme died in a car crash in April 2001, just one day after she reportedly had brunch with Reeves.

While their relationship was never officially confirmed, Reeves was linked to Forlani all the way back in 2003, per People. Apparently, the pair dated until 2006, and people even began to speculate that they were engaged, a report that Reeves shot down, telling the New York Daily News that they were just "good friends" in 2006.

Reeves was quite mum on his relationship status for a number of years until going public with artist and illustrator Alexandra Grant in late 2019. According to People, the pair met when they "first collaborated in 2011 on Reeves’ book Ode to Happiness, with Grant providing the illustrations. The project was her first artist book and Reeves’ first book as a writer." They worked together again on his 2016 books Shadows, for which Grant provided the illustrations. in 2017, they co-founded X Artists’ Books, a publishing house that focuses on “thoughtful, high-quality, artist-centered books that fit within and between genres,” according to its website.

It seems like Reeves is finally ready to have his love life out in the public eye a bit more. A source told People, "Keanu wants to openly share his life with her. He is extremely happy and grateful to have Alex in his life."

This article was originally published on July 1, 2019