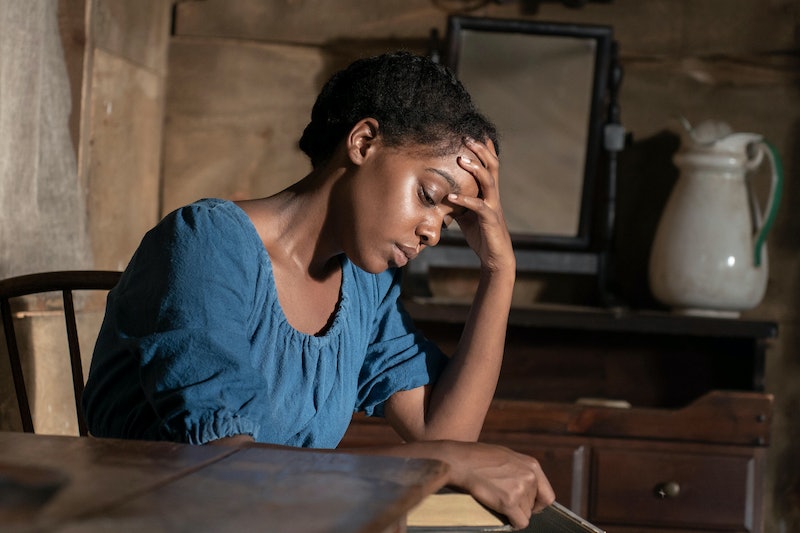 Adapted from Octavia E. Butler’s 1979 novel, FX’s Kindred centers on Dana James (Mallori Johnson), a young Black woman who recently relocated to Los Angeles to pursue a writing career. Before she can settle into her new home, however, Dana time-travels to a 19th-century plantation that’s closely connected to her family history. As she’s pulled back and forth through time and space, Dana must race the clock to confront family secrets she never knew existed.

Of course, there are several differences between the streaming Hulu series and Butler’s novel, as the author has described it. For starters, showrunner and writer Branden Jacobs-Jenkins advanced the present-day story to 2016 rather than sticking to the source material’s 1976 timeline. Meanwhile, Dana’s relationship with Kevin in the series, which only covers the first part of the book’s narrative in Season 1, is different. Unlike the novel, they are not married but are two strangers who meet just as Dana’s time-traveling ability emerges. Other changes include the introduction of the new characters. Major spoilers for the novel Kindred ahead.

In the prologue of Butler’s historical sci-fi novel, Dana’s husband, Kevin, finds her screaming in their new Southern California home. Her arm appears to be stuck in a hole in the wall. At the hospital, doctors amputate the lover half of Dana’s arm, and the police arrest Kevin on suspicion of causing her injury. Though the authorities don’t believe Dana’s claims that her husband was not responsible for the incident, they release him anyway. The couple tries to make sense of the traumatic events they’ve just experienced.

The book’s first chapter opens on Dana’s 26th birthday. While unpacking and settling into their new home, she experiences a dizzy spell and faints. When Dana regains consciousness, she’s inexplicably in antebellum Maryland, where she discovers a young boy named Rufus Weylin drowning. She saves his life by giving him mouth-to-mouth resuscitation, but when Rufus’ father, Tom Weylin, arrives and points a gun at her, she’s quickly transported back to 1976 California.

Minutes later, she experiences the same dizziness and awakens in Maryland, but several years have passed. After discovering Rufus had set fire to his bedroom drapes, she again swoops in to save the day. Before his father can find her again, she escapes the Weylins’ house and runs to the family home of a free Black woman named Alice Greenwood, who she suspects could be her ancestor. A white man eventually finds Diana there, and after he beats and attempts to rape her, she returns to 1976. It becomes clear that Rufus’ fear of death calls her to him, while her own life being in danger sends her back home to her present day.

The next time Dana time-travels, Kevin holds onto his wife and also time-travels with her to Maryland, where they play the parts of owner and enslaved person. On this journey, she meets a young enslaved boy named Nigel, and after Rufus refuses to let her and Kevin leave, they agree to stay on the Weylin plantation to educate the boys. However, the Weylin patriarch catches her teaching Nigel to read, and after he whips her as punishment, she returns to 1976. Because Kevin does not arrive in time to accompany her, he is stuck in the past.

Dana is transported back to the 1800s after eight days have passed in the modern timeline, and she discovers five years have passed there, and Kevin has left Maryland. Rufus has raped Alice, whose husband, Isaac, an enslaved person, is now beating him in retaliation. Dana convinces Isaac not to kill Rufus, who allows the Greenwoods to get away, and she agrees to stay in Maryland for two months. Later, Alice and Isaac are caught, and, as punishment for helping her husband escape, Alice is brutally beaten and enslaved. In love with Alice, Rufus buys her and blackmails Dana into convincing her to sleep with him. For her part, Dana understands that her destiny is tied with Rufus’, as he must father her ancestor Hagar with Alice before he dies.

Meanwhile, Rufus had promised Dana to mail her letters to Kevin, but she discovers that he had never actually sent them. Learning this, Dana unsuccessfully attempts to run away to find her husband, resulting in another vicious lashing. This time, she loses the will to run away, but when Kevin shows up (Rufus’ father had written to him about her return), they make another getaway attempt. Though Rufus tries to stop them at gunpoint, they’re able to safely travel back to the 1970s.

A few days later, Dana is back in Maryland alone, and Rufus is drunk and passed out in a puddle. She nurses him back to health, but when his father succumbs to a heart attack in the interim, Rufus blames Dana, sending her to the fields to work. The grueling work and routine whippings lead Dana to collapse, and after Rufus later hits her for the first time, she self-harms to send herself back home to 1976.

In the meantime, Alice gives birth to Hagar, her and Rufus’ second child and Dana’s direct ancestor. The next time Dana is in Maryland, she learns that Alice had attempted to run away. In retaliation, Rufus told Alice a lie that he’d sold her children, and, overcome with grief, Alice had died by suicide. The loss of Alice caused Rufus to feel a great deal of guilt and anger. After Rufus tells Dana that she reminds him of Alice, he grabs her by the wrists and attempts to rape her in the attic. Unable to escape by means of self-harm, Dana fatally stabs Rufus. Though this immediately transports her back home to the present day, her arm has been crushed and fused to the wall where Rufus’ hand was gripping it.

In the epilogue, once Dana recovers, she and Kevin go to present-day Maryland to find the Weylin house is gone. A newspaper article describes Rufus as dying in a fire, which Dana assumes Nigel had staged to cover up the murder for her. Though the plantation’s enslaved people had been sold following Rufus’ demise, Dana and Kevin are unable to find records of what specifically happened to Nigel, Hagar, and Alice’s other children. However, she knows her ancestor at least lived long enough to be emancipated by the United States Constitution’s 13th Amendment in 1865.