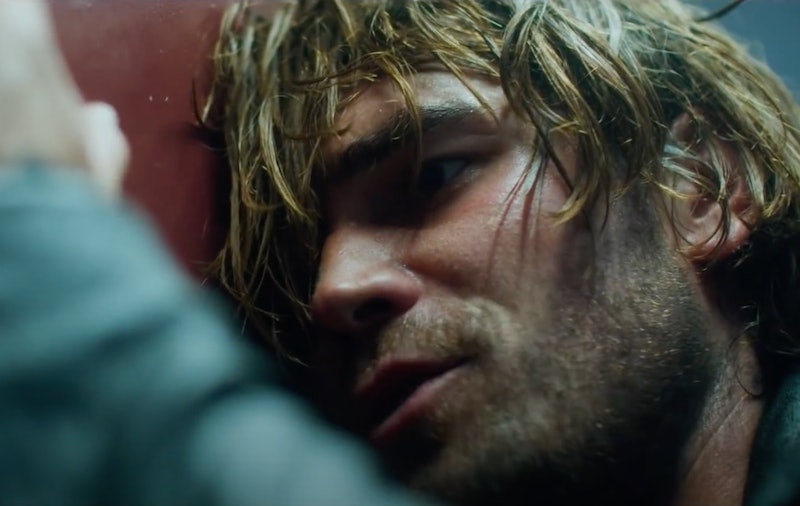 If you thought it was too soon for a coronavirus-inspired action movie, you're certainly not alone. The Songbird trailer arrived on Thursday, Oct. 29, featuring Riverdale's KJ Apa in one of the first films to begin production again after COVID-19 lockdowns. Unfortunately, people on Twitter are not happy about the new movie, calling it insensitive and insisting that producer Michael Bay needs to "read the room."

Songbird is set in 2024, and somehow, the world is still in quarantine. This time, however, people are facing an even deadlier virus called COVID-23, and those infected are ripped from their homes and forced into camps known as Q-Zones. The film centers on Apa's character Nico, a COVID-immune Los Angeles courier who falls in love with Sara (Sofia Carson) — because let's be real: what's a sci-fi thriller without a romance arc, right?

Soon after the trailer dropped, many people took to Twitter to voice their thoughts and concerns about the film, with most arguing that it's an inconsiderate movie to release given that the world is currently weathering an active pandemic (and one with a similar name, no less). With people still being hospitalized, losing family members, and being laid off from their jobs, the internet seems to be in agreement that it's just too soon to watch a pandemic-inspired flick.

"I will not watch this," one person tweeted, adding that a movie about a widespread fatal illness is the last thing people need to see right now. "We need facts, science and pragmatic policies. This does none of that." "Nope...not watching movies about how this gets drastically worse," another person wrote before emphasizing the ways in which COVID-19 has drastically implicated people's everyday lives. "Already don't get to see family and friends...it's not a plotline I think I care to ever see," they continued.

There was also a seemingly endless stream of tweets calling out Bay directly:

Per the film's description, Apa and Carson will be joined by a cast that includes Demi Moore, Bradley Whitford, Alexandra Daddario, Craig Robinson, Peter Stormare, and Paul Walter Hauser. Moore and Whitford are set to play a "wealthy couple" who might be able to help Nico on his quest to save Sara from impending imprisonment in a Q-Zone. Daddario will play a singer who's involved in a "messy and forbidden affair," so yeah, there's a lot going on here.

If you just so happen to be one of the few people on Twitter who actually wants to see Songbird, you're going to have to keep your antennas up for more info. At the moment, no official release date has been announced, with the trailer only revealing the movie is "coming soon." And judging by the internet's strong reaction to the trailer, something tells us not many people will be clearing their calendars to make way for the film's release.

More like this
How Andrea Riseborough Got Nominated — & Almost Disqualified For An Oscar
By Jake Viswanath
Jennifer Coolidge Hunted For Jewels & Lashes In J.Lo’s Hotel Room
By Jake Viswanath
Paul Mescal’s Family Celebrated His Oscar Nomination In The Sweetest Way
By El Hunt
What Really Happened Between Lea Michele & Sadie Sink On 'The Tonight Show'
By El Hunt
Get Even More From Bustle — Sign Up For The Newsletter
From hair trends to relationship advice, our daily newsletter has everything you need to sound like a person who’s on TikTok, even if you aren’t.