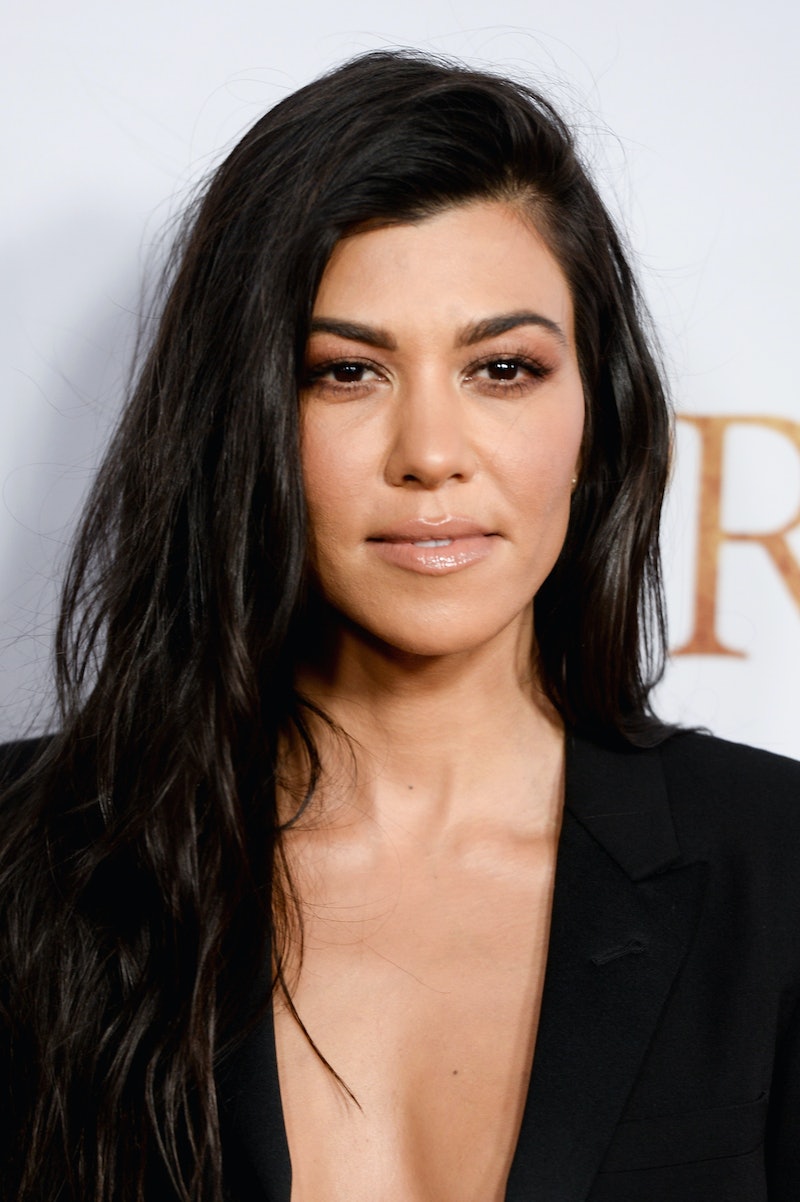 Continuing a string of grand romantic gestures, Travis Barker sent Kourtney Kardashian a birthday gift on Saturday, April 17 that made quite a statement. The Blink-182 rocker’s present was an arrangement of tulips and gardenias of truly massive proportions, stretching from one story of her house to another. Kardashian, who turned 42 on April 18, posted several photos of the elaborate gift on her Instagram story, including a photo in which she tagged Barker with a black heart emoji.

The Poosh founder also wrote a quick note about how thoughtful the flower arrangement was, writing, “Tulips and gardenias are my favorite flowers ... my entire house smells yummy.” Her sister Kim Kardashian West confirmed the lovely scent in footage on her own Instagram story, and she told followers, “This is so beautiful; I’ve never seen anything like this.” Meanwhile, Barker reposted his girlfriend’s photos on his story, along with another that appears to be from the couple’s birthday meal together.

Kardashian and Barker were first linked in January, after the two posted the same view from Kris Jenner’s home in Palm Springs on Instagram, according to People. “They’ve been dating for about a month or two,” an anonymous source told the publication at the time. “They’ve been friends for a long time but it’s turned romantic. ... Travis has liked her for a while.” Barker, whose home is located in the same Calabasas neighborhood as Kardashian’s, was a family friend prior to developing a romantic relationship with the reality star, according to Elle.

On Feb. 16, Kardashian confirmed her relationship with Barker, posting a photo on Instagram of the two holding hands and showing off her Valentine’s Day-themed manicure. Barker commented on the post with a black heart emoji. The couple has continued to share plenty of relationship updates on social media since going public with their romance. On April 9, Kardashian shared a photo of Barker’s new “Kourtney” tattoo, revealing that the drummer had inked her name on his chest.

Barker has also shared a few equally candid moments Instagram. On April 10, he uploaded a photo of him drumming outdoors, captioning it, “All day I dream about sex w/ you.” Making sure there was no confusion about whom he was referring to, he tagged Kardashian. Earlier in the month, Barker documented their romantic ski getaway, sharing a video of them slow-dancing outdoors. “Real is rare,” he wrote in the caption.

The couple appears to be going strong, so Barker may have his work cut out for him next year when it comes to topping such a beautiful gift.

More like this
Everything To Know About 'RHOSLC' Season 4
By Jake Viswanath
'RHOSLC’s Heather & Whitney Are Still On A “Friendship Break” After Season 3 Reunion
By Jake Viswanath
RHOP’s Robyn Dixon Explained Why Juan Paid For Another Woman's Hotel Room
By Brad Witter
Everything To Know About 'The Real Housewives Ultimate Girls Trip' Season 4
By Jake Viswanath
Get Even More From Bustle — Sign Up For The Newsletter
From hair trends to relationship advice, our daily newsletter has everything you need to sound like a person who’s on TikTok, even if you aren’t.