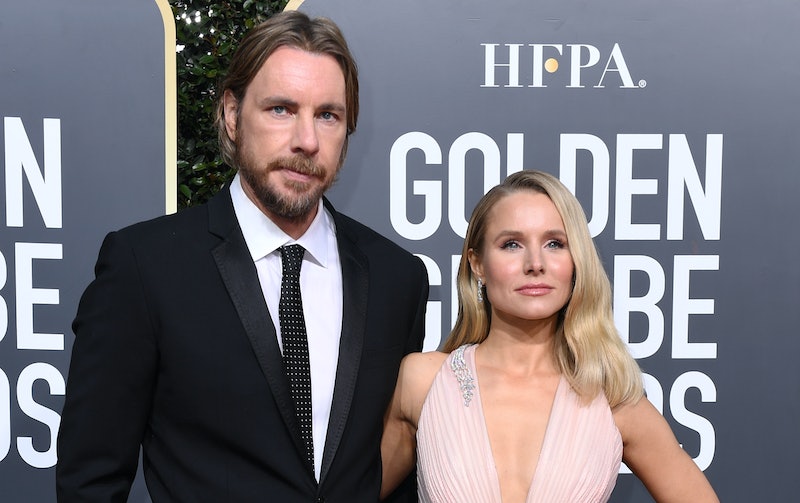 Dax Shepard has been very open about his struggles with substance abuse issues over the years, and, in September, he revealed that he had recently relapsed. And he did so with full support from his famous wife, Kristen Bell, who spoke about standing by her husband during an appearance on The Ellen DeGeneres Show Wednesday, Oct. 14.

In the new interview, Bell gave fans an update on Shepard, saying he was doing "really great" and remained optimistic about his recovery process. "I mean, look, everybody's up against their own demons," she said. "Sometimes it's anxiety and depression, sometimes it's substance abuse." The Good Place star went on to explain that she made the choice to continue standing by her husband because he was honest about his relapse and actively wanted to work on making a change.

"One of the main reasons I love him is he's also addicted to growth," she explained. "He's addicted to evolving. He was like, 'I don't want to risk this family and I did, so let's put new things in place to make sure it doesn't happen again.'" The actor also added that the two were actively working on their relationship together, as well, by going to couples therapy, something she's talked about doing in the past. "We're going back to therapy. I love that he's addicted to growth and I will continue to stand by him because he's very, very worth it."

On the Sept. 25 episode of his podcast Armchair Expert, Shepard admitted that he had relapsed after 16 years of sobriety. A month prior, he experienced a motorcycle accident and had to undergo surgery after breaking four ribs for which he was prescribed pain pills. However, he secretly started upping the dosages and lying to Bell about it. "I'm now just taking 30 mil Oxys that I've bought at whenever I decide I can do," he said, as per People. "But my tolerance is going up so quickly, that I'm now in a situation where I'm taking eight 30s a day, and I know that's an amount that's going to result in a pretty bad withdrawal. And I start getting really scared, and I'm starting to feel really lonely. And I just have this enormous secret." Eventually, he came clean to both Bell and his podcast co-host Monica Padman at the same time, noting that celebrating his 16th year of sobriety on Sept. 1, which Bell commemorated on Instagram, while being high was "the worst hour of my life."

On Wednesday, Bell expanded on Shepard's story, telling DeGeneres that the couple had a plan that when Shepard needed to take medication for any reason, Bell would administer it, a rule he admitted to breaking. "The thing I love most about Dax is that he was able to tell me and say we need a different plan," she said, explaining that now that they know that strategy doesn't always work, they've come up with a new one. "He was like, 'So, we need a stronger plan. I was faltering and I have to do some sort of emotional work to figure out why I wanted to use again.'"