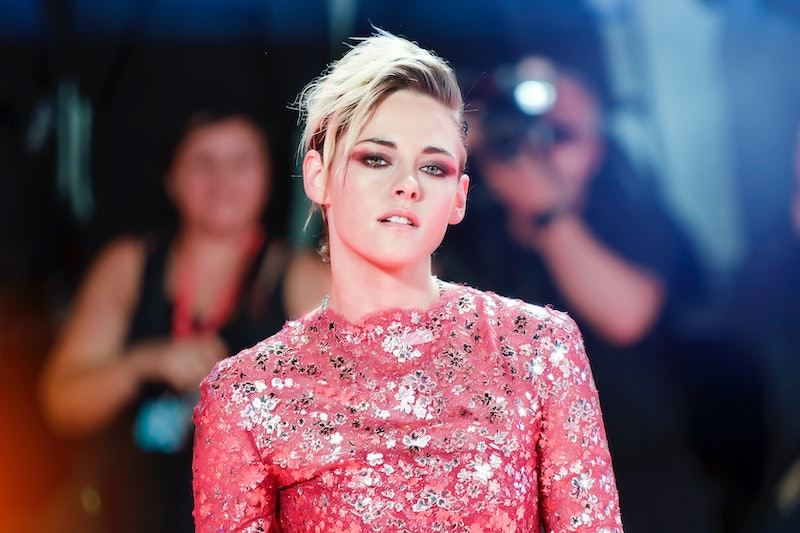 It's not easy to play one of the most well-known and philanthropic princesses in British royal family history, and Kristen Stewart is taking playing Princess Diana very seriously. In a recent interview, the Twilight star teased how she's prepping to play the iconic role in the upcoming movie Spencer. And rest assured she's doing more than just working on her British accent to play "the people's princess" — though that's pretty high on her list.

"The accent is intimidating as all hell because people know that voice, and it's so, so distinct and particular. I'm working on it now and already have my dialect coach," Steward told InStyle. "In terms of research, I've gotten through two and a half biographies, and I'm finishing all the material before I actually go make the movie." Spencer is currently set to begin filming in mid-January. "It's one of the saddest stories to exist ever, and I don't want to just play Diana — I want to know her implicitly. I haven't been this excited about playing a part, by the way, in so long," she teased.

The film is titled after Diana's birth name, Diana Spencer. She became Diana, Princess of Wales, after marrying Prince Charles in 1981. Rather than being a full on biopic, Spencer will focus on a specific weekend in her life prior to Diana's tragic death in 1997. However, in a recent interview with Deadline, director Pablo Larraín assured fans that the movie will not feature Diana's car accident at all.

Instead, Spencer will take place over three days in the early '90s (Christmas Eve, Christmas Day, and Boxing Day). During a long weekend at the House of Windsor in the royal family's Sandringham estate, Diana realizes that she wants to step away from the royal family and Charles (the two divorced in 1996). "We decided to get into a story about identity, and around how a woman decides somehow, not to be the queen," Larraín explained, circling back to the title of the film. "She’s a woman who, in the journey of the movie, decides and realizes that she wants to be the woman she was before she met Charles."

As for why Stewart was selected to play the unforgettable icon, Larraín noted, "To do this well, you need something very important in film, which is mystery. Kristen can be many things, and she can be very mysterious and very fragile an ultimately very strong as well, which is what we need."