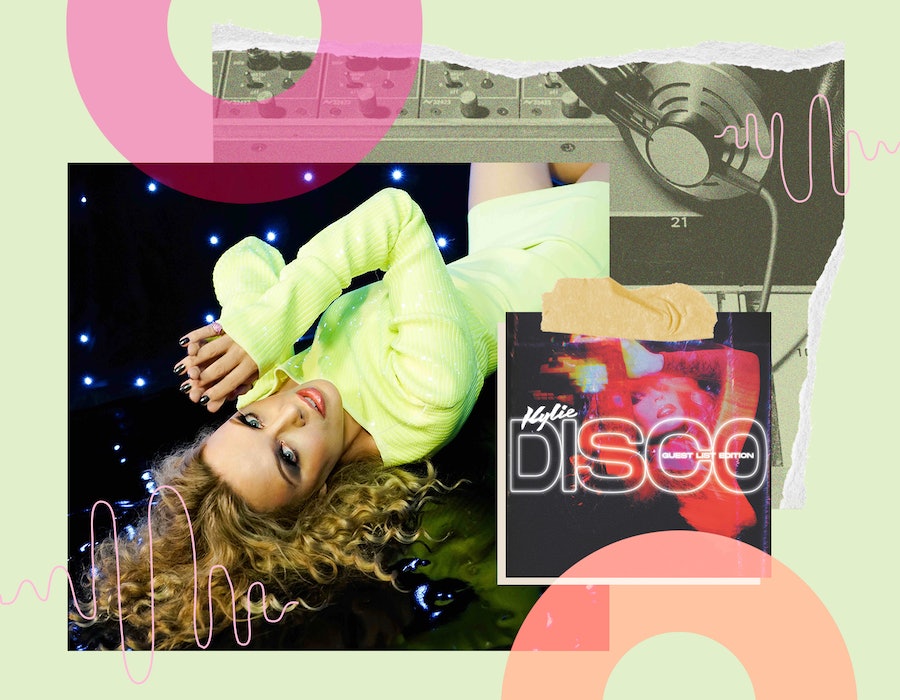 Kylie Minogue is always ready to throw a damn good party. From her catchy 1987 debut “The Loco-Motion” to the 2001 earworm “Can’t Get You Out Of My Head” to 2020’s “Real Groove” collab with Dua Lipa, the 53-year-old entertainer’s brand of feel-good dance pop is so timeless that in 2020 she became the first female artist to have No. 1 albums in the UK across five decades.

Now, a year after her 15th studio album Disco soundtracked bedroom dance parties during lockdown, the Grammy winner is inviting a slew of musicians from Dua Lipa and Jessie Ware to Queen of Disco Gloria Gaynor to dance with her again on Disco: Guest List Edition. It’s a fitting tribute to an album partly about connecting with others. “The one thing we were all craving was connection, and with music, we were able to do that,” Minogue says. “It could just magically be on a radio or be on someone’s phone. It was brilliant.” The album’s lead single “Say Something” was used as the finale slow dance in Netflix’s teen comedy Never Have I Ever, once again proving Minogue’s music transcends generations.

Come 2022, Minogue hopes to have more connections face-to-face with fans, perhaps in the form of a US tour. “If things went differently the last couple of years, I would absolutely have already come to the States with Disco,” she says. “It’s time, it’s been a while already, so it’s high up on my list.” Her other resolutions, though, don’t involve a tour bus. “I say the same thing every year, just try to be present, try to be good, try to live a healthier, more balanced life,” Minogue adds. “I don’t know that I’ve succeeded any year, but I’ve managed to somehow get through another one, as we all have.” Having Disco in the world certainly helped.

Below, Minogue discusses her wild new music videos, her favorite disco artists, and the actor who should play her in a musical about her life.

On Her New Music Videos & The Evolving Meaning Of Camp

In the “A Second to Midnight” video, you switch looks with Olly Alexander. If you had to switch looks and hairstyles with any other star in the world, who would it be?

Good question. Just because for some reason she was mentioned the other day ... Kelly LeBrock came up in the scene in Weird Science, where she’s backlit and there’s a pink light behind her and we all just said, “Oh my God. How does anyone ever look that gorgeous?” So I’d like to have that moment as her. We can also easily just go with Prince singing “Purple Rain” in Purple Rain, the movie, because he would look out and see me at what, 14 years old or so, repeatedly going to the theater and crying my eyes out.

Your video with Jessie Ware, “Kiss of Life,” is hilarious in the best way. Would you consider it camp, and how would you define camp?

I think it is camp, but I don't think it’s just camp. It’s a little difficult to quantify what camp is these days. I think years and years ago, it was a little bit fruity, a bit funny, over the top. I find many things that I do may be called camp, and it is, but it’s many other things. I suppose we were referencing Almodóvar and Dynasty and Days of Our Lives — over-the-top, but with a knowing wink. I have to say that I think Jessie and I lost ourselves to our characters, or certainly when I saw it back I was like, “I don’t really remember doing that.” That was quite a full-on look, the expressions and how we worked with each other.

I think you just have to give over to it, but also if you’re going to dive into anything that’s camp, it’s also acknowledging that that is probably a reaction to other things. It’s like with disco as a whole, it isn’t just sparkly and fun, although that’s the way it mostly reaches people. But it’s come from struggle. You think about English theater when women couldn’t take acting roles and men would take the roles and do their version of women. Some of it has come from repression and having to inhabit something other than what is acceptable, but in a comedic way. So that’s why I think it's difficult to say, “What is camp?” As far as I’m concerned, it’s always respectful.

Do you have a particularly funny or memorable moment from set?

With “Kiss of Life” being an all-night video, there was a few moments of full-on fatigue and delirium. I would say it kicked in a couple of times after I had my espresso and pasta at 5 a.m. I was being pretty good until about 7 when I realized that might not have been the answer.

With “A Second to Midnight,” obviously the big reveal of Olly and I seeing each other, I was so touched and grateful that he agreed to go with this idea. And actually in both cases, I would forget what I looked like. I had someone from my label visit me on the set of “A Second to Midnight,” so when he saw me, it was only the shock on his face that reminded me that I had a red pixie crop and rather characterful eyebrows.

Who are your favorite disco artists?

Gloria Gaynor, Donna Summer, the Bee Gees. I’ll go with those three actually. And Chic is one of my favorite disco artists too.

Oh, it’s been way too long. I think the last karaoke song I sang was “Heard It Through the Grapevine.” That’s really aging me.

Is there a song you’ve written that you’re most proud of?

What instrument do you wish you played?

The guitar, just because you can carry it with you, you can play it anytime you like, you don’t have to tune your piano. You can go and shred the guitar, maybe with some pyros coming out of it on the B-stage. Good times.

Do you have a favorite Christmas song?

I would say my song with my sister, which is called “100 Degrees” just because it’s my sister, it’s family. When I worked on my Christmas album a few years back, I just said, “There’s got to be a song that isn’t about snow,” because I’m Australian, we’ve got warm Christmases.

What’s a moment that made you realize that you were a musician?

Oh, that’s been an evolving one. I don’t think there’s a definitive moment for that. I think it’s been slowly over the years, and even now, sometimes I need to remind myself. I think we all need to feel valued and validated. I would say [playing] Glastonbury 2019 was a good moment for me, but I feel like it didn’t take that long.

Who would play you in a musical of your life?

If I could reverse engineer it, Ann-Margret would. Taking her from way, way back. Who would you choose?

Margot Robbie comes to mind, but I’m not sure if she sings.

That’s OK. Margot Robbie could do it all day long. I’ve met her in person, she’s so luminous. Yes, please, Margot Robbie. We know she’d have the accent down, so that’s not a problem. She can do anything. I’m sure she can sing.

More like this
Everything To Know About The 2023 Grammy Awards
By Jake Viswanath
Twitter Can’t Believe The Madonna Biopic Is Scrapped & Fans Have A Solution
By Alyssa Lapid
Hilary Duff's Husband Matthew Koma Has Her Name Tattooed On His Butt
By Jake Viswanath and Stephanie Downs
Twitter Is Panicking Over Panic! At The Disco Breaking Up
By Radhika Menon
Get Even More From Bustle — Sign Up For The Newsletter